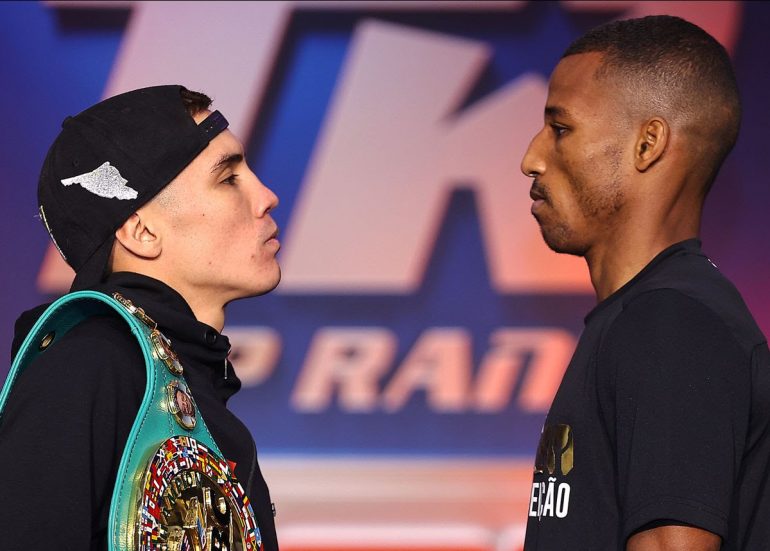 It has been 12 years since the last time WBC junior lightweight titleholder Oscar Valdez and amateur nemesis Robson Conceicao were in a boxing ring together.

But they will share one again when Valdez will make his first title defense against Conceicao, with the bonus of having the opportunity to avenge a significant amateur loss to him all those years ago, one that Valdez still vividly recalls.

The 130-pound world title fight is the main event of a Top Rank Boxing on ESPN+ card on Friday night at the AVA Amphitheater at Casino Del Sol in Tucson, Arizona, where Mexico’s Valdez grew up and views as a second home. The preliminary bouts will stream on ESPN+ beginning at 5:30 p.m. ET with the main card tripleheader beginning at 10 p.m. ET.

There is well-documented controversy over Friday’s fight because of the fact that the Pascua Yaqui Tribe Athletic Commission, which regulates combat sports on Casino Del Sol’s tribal land, is allowing Valdez to fight, and the WBC is still going to sanction the bout, even though Valdez tested positive for the stimulant Phentermine in a random test conducted by the Voluntary Anti-Doping Association on Aug. 13, with the result being returned on Aug. 30.

The issue has sparked plenty of controversy, which Valdez, who claims he did not knowingly take the substance and attributed its trace presence in his system to tainted herbal tea, is trying to tune out.

Valdez is instead focused on retaining the title he won from Miguel Berchelt in a dominating upset that he ended with a spectacular one-punch, left-hook knockout in the 10th round on Feb. 20 in Las Vegas.

It’s not that the 30-year-old Valdez (29-0, 23 KOs), a 2008 and 2012 Mexican Olympian and former featherweight world titleholder, has been haunted by his amateur loss to Conceicao and had been seeking out a pro rematch. But as long as it was offered by Top Rank, their mutual promoter, Valdez said he is very much looking forward to the chance for some get back against Conceicao (16-0, 8 KOs), 32, a three-time Olympian from Brazil and a 2016 Olympic gold medalist.

Their amateur meeting was in 2009. Valdez, who was 18 at the time, lost 6-5 to Conceicao in the Pan American Games featherweight gold medal bout in Mexico City.

“I remember it like it was yesterday,” Valdez told The Ring. “Nobody likes losing, especially me. I’m a very sore loser. I hate losing and I remember that night. My family was there, my whole people was there. I really wanted to bring that gold medal to my house and it was a back-and-forth fight. I remember him hitting hard and he only beat me by one point, but it was a great fight. I remember the fans were yelling and screaming. Everybody was excited.

“It was a fan-pleasing fight and I lost by one point and I was crying like I was a little kid because I really wanted to bring that gold medal to my house. I remember telling myself that sooner or later we were going to fight again.”

Conceicao said he also remembers the fight, one of his many major international tournament victories.

“When I fought him it was a tough fight, very rough,” Conceicao said through an interpreter at the final news conference on Wednesday. “I had to fight with both him and the crowd, and it motivated me a lot and made me happy. So, here it will be the same thing. I will fight against two opponents — him and the crowd and I will be the winner.”

Valdez thought that future meeting would come while they were still amateurs, but Valdez turned pro in 2012 and when Conceicao elected to remain amateur for another Olympic cycle, Valdez said the notion of another fight with him never crossed his mind.

“I thought he was old news,” Valdez said. “Then we heard about him again in 2016 when he wins the gold medal (in the Olympics) and he turns pro with Top Rank. That’s where I saw him again and said, well, maybe in the future we’ll see each other, but I really wasn’t paying much attention to him. Now, I get the chance to fight him, so it’s a great opportunity for me to avenge one of my losses I had in the amateurs. I know I’m a completely different fighter now than I was when I was an amateur, so it should be good. It should be a chance for me to do my best in front of my people in Tucson, Arizona.

“It’s a great chance for me to, first of all, defend my WBC world championship; two, to avenge my loss; and three, fight in front of my fans, which I have missed so much because my last two fights have been without a crowd (due to the coronavirus pandemic). You miss the cheering and the people getting excited.”

The Conceicao fight did not come about because of the amateur fight storyline. It wasn’t like Valdez was seeking him out. Instead, Top Rank was looking to line up Valdez’s first defense against a good contender and since it also promotes Conceicao, it was a relatively easy to make.

“(Manager) Frank Espinoza calls me and says, ‘Do you know Robson Conceicao? Do you want to take the fight?’ I said, ‘Robson, I fought him before, I lost to him. Let’s make the fight happen,’” Valdez said.

Conceicao is certainly glad he did, because it is by far the biggest fight of his pro career.

“It’s a moment that’s very important, the most important in my life,” Conceicao said. “I’m happy I’m here and not alone. I’m here for the Brazilian crowd, for my family, for my team, and it will be great. I am here to do my best and have the greatest fight of my life.”

Valdez said he will go into the bout with the utmost confidence and as a far more polished and experienced fighter than he was when they first met all those years ago.

“He felt like a way more mature fighter to me, so every punch he was landing I remember hurting a lot,” Valdez said of the amateur clash. “But now we’re both mature fighters. I’ve got experience, we both have great amateur backgrounds, but I feel the key to this fight is definitely strategy and the team that I have, (trainer) Eddy Reynoso and my father (Oscar Valdez Sr.), in the corner. We have the perfect game plan. I just feel I’m a better fighter than my opponent.”

Should Valdez avenge the amateur defeat and retain the title, there is one fight he wants next and it’s a biggie.

“Not overlooking this fighter, obviously, because I take him very seriously, but if we come out victorious I would love a fight with the winner of Shakur Stevenson and Jamel Herring. Unify the belts. People have been asking for it,” Valdez said.

Herring (23-2, 11 KOs), 35, a Coram, New York, native, is scheduled to defend his WBO title for the fourth time when he squares off with interim titlist Shakur Stevenson (16-0, 8 KOs), 24, of Newark, New Jersey, in a mandatory bout on Oct. 23 in Atlanta in the Top Rank Boxing on ESPN main event. Top Rank chairman Bob Arum has said repeatedly that should Valdez defeat Conceicao he wants to match him with the Herring-Stevenson winner next year in what would be the biggest fight the current 130-pound division has to offer.

“Shakur Stevenson has been opening his mouth a lot and calling me out, so that’s definitely a fight the fans want to see. Let’s do it,” Valdez said, making his Oct. 23 pick obvious. “As a champion, we’re obligated to give the fans what they want, which is good fights. Right now, that’s the one fight that comes to my mind. It’s a fight that would have to be made for 2022.”