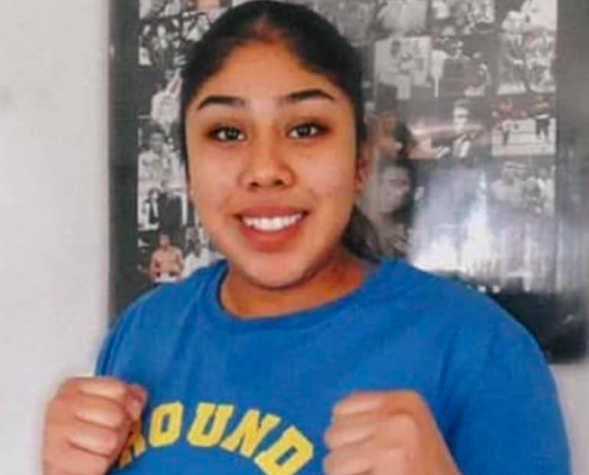 The father watched his daughter Jeanette Zacarias Zapata fighting Marie-Pier Houle on a Facebook stream the night of August 28. Papa Esteban participated remotely; he’d dip to his left as he watched his daughter rumble, when he saw she had an opening for a left hook. Of course, he would have loved to be by her side, this teenager at age 18 who seemed older, because of her resolve, and composure as she battled. But, giving instructions to his princess warrior couldn’t happen, the pandemic negated that option.

Esteban is a butcher, the 42 year old tradesman had his own shop but that closed down because of coronavirus. He started working at a meat shop where Jeanette was born and lived, Aguascaliente, Mexico, about a month before. The father told me, low-key bursting with fatherly pride, that he thought Jeanette was up on the cards after three rounds completed of the welterweight contest, a Yvon Michel promotion which took place Saturday evening at Stade IGA in Montreal, Quebec, Canada.

Kim Clavel, a light flyweight, has some buzz attached to her, so a certain number of fans came to see her try to get to 13-0, and super welter Mikael Zewski, entering at 35-2, stood out as the “biggest name” on the Saturday slate.

Marie-Pier Houle, holding a 2-0-1 record, was favored to stay unbeaten as she met Jeanette and slung leather in center ring. Maybe you want to see for yourself what it looks like when tragedy strikes, what if any signs were missed by the ref, or other officials. There are videos to be found on YouTube, but not the whole fight.

Just the ending, which saw a depleted Houle firing at the willing but drained Mexican underdog who possessed a 2-3 record, yet still held hopes of improving at the craft, and getting on a winning streak, and progressing to a place where she’d be in title fights.

It wasn’t a remarkable bit of video, something similar happened in map points around the world that very evening. In Argentina, Brazil, Germany, Poland, Russia, and so on, underdogs with less experience, an inferior skill set and record, but the desire to campaign and prove doubters wrong, did what Jeanette did. While taking the worst of it, they fought back, they returned fire, even as they risked being totally overwhelmed.

The shots that you can watch on replays, yes, they look ugly, but mostly because of the context. If you didn’t know that Jeanette died five days after her battle with Marie, not one of you would ever see a millisecond of footage. Briefly brutal, and almost immediately looked past, to the next fight, the next challenge, next, if the punishment hadn’t affected Jeanette just so.

But you watch, not to be ghoulish, but to inform yourself, what does it look like when punches are lethal. A right hand, it landed too clean, and Jeanette was beyond buzzed with her back to the corner. The bell sounded, though, as the ref Albert Padulo contemplated his move. 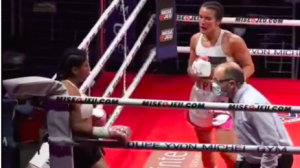 Houle had been aware of the time, and in fact backed off, assuming the bell would ding, after her right hand detonated. Padulo saw Jeanette having absorbed two handfuls of blows, saw the vacant look in her eyes, and waved his hands, the universal sign of, “It’s over.” Houle celebrated, unaware that the punches exacted a harsher toll than she’d ever hope for. Jeanette slumped in the corner, sagged down, in a way that is familiar if you’ve seen one two money of these saddest of endings. Houle danced about the ring, appreciating the applause, and became aware of the gravity of the moment when she saw Jeanette almost seizing, her right arm pumping, and then melting to the floor.

Esteban, husband to Jeannette’s mom Irene Zapata Silva, watched on a Facebook stream from Mexico. He worked as a butcher nine to five, but had fought amateur and pro, and adored the sweet science. The father brought the girl when she was 11 along with her brother Diego to a gym in Aguascaliente, a small state in that nation. “I saw most of the fight, I saw the ending,” Esteban told me on Monday night, through interpreter/ring emcee Lupe Contreras, on a call arranged by good-hearted pro Sulem Urbina, a native of Mexico. “I don’t understand how that accident occured, I don’t know why the ref allowed it to continue.”

Esteban communicated clearly and calmly, showing massive fortitude. I told him as much at the end of the call. Before that, he said he wants to know more so what happened after Houle’s flurry proved catastrophic to Jeanette. And he declared that he doesn’t expect to ever be the same when he got word–a couple hours after being told she was breathing on her own, after being taken to a Montreal hospital, unconscious, with severe head trauma–that Jeanette had passed away.

“I feel destroyed right now, she was everything, not just my daughter,” he told me. “She was constantly by my side, we’d go to events all the time. I can’t imagine any greater pain. I’d even cut off my right hand, and I think the pain would not equal to what I’m experiencing. Life from now on will no longer be the same, they just yanked a little bit of my soul away.”

Esteban told me that Jeanette showed such spirit, toughness, gameness. So any social media chatter about her being reticent, or a lamb dragged to the sacrifical altar, that’s just not the case. “She was my pride, she wasn’t afraid of anyone,” he continued. “She’d always go forward.”

They do, often, we know this, make ’em different in Mexico. I won’t apologize for the too-broad assertion, but it’s proven truth, a Mexican inside a prize-fight ring, odds are, is going to own a bigger than average reservoir of guts. Jeanette debuted as a pro in January 2018, as a teenager. She took a break after being stopped by Alma Ibarra in November 2018, returning in May 2021 to get stopped in round six against Cynthia Lozano. More than three months later, she summoned her pride, stubborn in a good way, and ran the streets with dad, planning to have plenty of stamina while trying to down the Quebecer Houle. Her physique sent the message that she’d worked her butt off, and she was proud to have stepped up the conditioning. To Jeanette, it would not have been seen as an upset win, but to others, she was the B side invited to the party to either take spotlight from the featured talent or leave the building with lumps, a loss and a check.

Yes, Jeanette had been stopped in two of her five outings, but she wasn’t ever talking about stopping her dream, to improve and excel and rise in stature. “Did she voice worries ever about getting badly hurt? Like everyone else mostly, all fighters who get in the ring, they get a little scared in the beginning. We talked about (the possibility of being gravely injured), but after adrenaline kicks in, like all fighters, she was OK,” the father said to RING. “She did have some concerns, but this was her passion, her love, and she told me she was going to do whatever she had to to become world champion.”

Esteban wanted to share some info to speak to what he says are erroneous statements being made on social media. That, and announce that he’s not resigned to what happened. Because he still wants to better understand why he’d had video chats with doctors who he said seemed more optimistic about her condition, and how that quickly morphed into hospital personnel asking about removing her from life support. “There are some things I don’t understand,” Esteban said. “They contacted me for authority, to remove from life support, and I said, “No, it’s not going to be up to me, it’s her decision, it’s her fight to keep fighting.” This is, he decided, in God’s hands, not his.

Esteban had been working to get permission to travel, to Montreal, because of this medical exemption, and he’d gone about it the right way, through the local consulate. Flights were being arranged. “I was told Jeanette was breathing on her own, she was doing OK. Maybe two hours later, on video chat, I was told they had bad news. I said, ‘Are you playing with me, are you joking?’ The silence answered that question. “How can this be, in the matter of two hours, she’s gone?”

Blame the pandemic for the presence of a lack of clarity, I think, to some degree, because it’s a hard ask to have it so patient’s family gets apprised of developments re: a loved one. Esteban still doesn’t know details about the last moments. And he’s told they will do an autopsy in Canada, which he’s OK with, but he also wants to make sure that an autopsy is done in Mexico.

I told him, the floor is yours, what do you want to share with people, what could be done to make it so this horror is minimized maybe just a small measure.

“I do want to talk about the stuff on social media,” he said, countering talk of Jeanette being a neophyte imported to get wrecked. “I was with her the entire time, training, about 30 days, the only day I was seperate from her was the day she left for Canada. We would run, and I was her sparring partner, too. I trained by her side. She was very well prepared, she was strong.  So many people never have beeen in the ring, taken a punch, they don’t know what it’s like to be there.”

Details are still being hashed out regarding a memorial service back home for Jeanette. Esteban said he is very thankful with the outpouring of support, be it verbal, text and via GoFundMe. “I want to bring funds together, send her off with a memorial, a funeral to do her justice, honor her memory. I want to give her a dignified farewell, saying goodbye.”

And does he have anything to inform us, or warn us, so maybe we catch something, and one less parent has to go through the painful exercise of working on their child’s memorial service. “The lessons are for boxers to go in there and be well prepared, and treat it like a sport,” Esteban told me. Let’s see less nasty head-hunting, basically, he’d like the boxing powers to perhaps acknowledge the rigors of competition, and make concessions by tweaking the product, as the NFL has. But no, you’ll not get a call to shut it down from Esteban.

“I have no regrets on her entering the sport,” he said. He thought about Jeanette’s drive to rise the ranks, so that she might enjoy a gaudy purse one day, and happily share the proceeds with her parents. ‘I will help you one day,’ she said, and I said don’t think about that. I told her she was setting an example for other women, and when I said that, I saw she got light on her feet, she was so proud. It’s the sport she loved, we both loved and love, I always will at my end. I have no regrets. And will I watch boxing anymore? Absolutely, I continue loving the sport. I feel pride when I teach boxing skills, I will continue to do that. I made a promise to my daughter that I’d practice the sport until my final day. I will always love the sport of boxing. And last thing, I want to tell the people in the US, Canada, Latinos everywhere who have reached out, it’s hard to make you understand what this means to me. You guys have given me strength, made me stronger, you’ve made me stronger with your words, and I will be eternally greatful.”