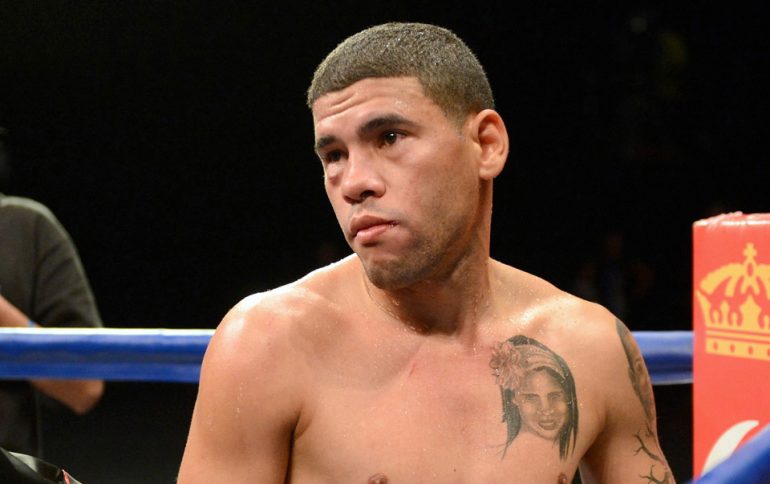 Juan Manuel Lopez was arrested on Tuesday evening after an ex-girlfriend accused him of domestic violence.

Andrea Ojeda posted four pictures on social media early Tuesday sporting her injuries at various stages, which all display swelling under her eyes.

“This is what Juan Manuel Lopez AKA “juanma” [did to me],” Ojeda stated.

She also shared a video that allegedly shows Lopez calling her a “puta” before punching her as she was sitting in her car.

Lopez (36-6-1, 32 KOs), a southpaw from Puerto Rico who won titles at junior featherweight and featherweight, arrived at the Caguas Police Department, where he turned himself in and was escorted by police.

“I left Juanma because Juanma is an abuser,” she added via translation from BoxingScene.com “Juanma is an abuser, he is an abusive man, he is a man who has alcoholism problems. When Juanma drinks alcohol, he transforms himself into a person he is not.”

Lopez has faced similar charges in the past.

In 2015, he was accused of domestic abuse against ex-girlfriend Geraldine Crespo, who suffered trauma to her nose. However, the charges were eventually dismissed after Crespo decided she was no longer interested in taking the case further.

After Ojeda came out publicly against Lopez, another former partner, Marangely Lozada, also described her experiences with Lopez, though she said the retired boxer never physically abused her.

“I discovered the problems he has; psychological problems, anxiety, infidelity, a lot of insecurity, alcoholism, depression expressed with aggressiveness, machismo, above everything, he was a very controlling person,” Lozada stated.

The 38-year-old Lopez last fought on May 18, 2019, when he fought Emiliano Martin Garcia to an eight-round draw in Puerto Rico. In the bout prior, he outpointed Christian Ruben Mino over 10 rounds.