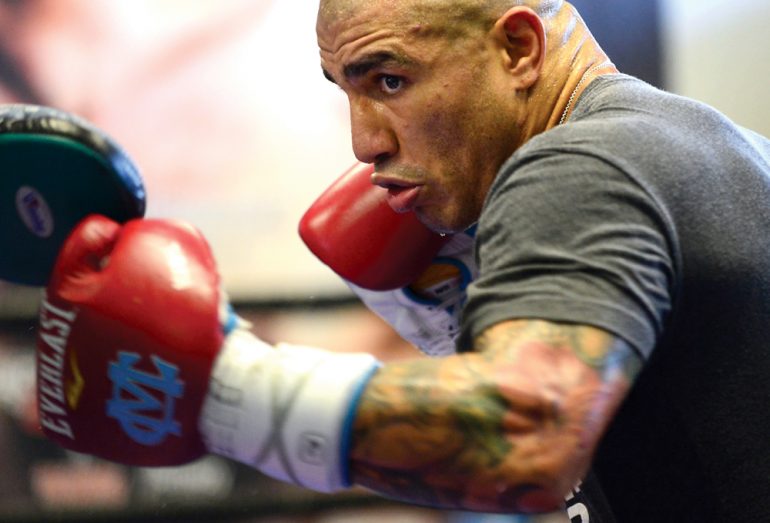 Cotto was never one to slack off in training. (Photo by Frederic J. Brown/AFP via Getty Images)
08
Sep
by Anson Wainwright

Editor’s Note: This feature originally appeared in the August 2021 issue of The Ring Magazine, available for purchase at The Ring Shop.

Miguel Cotto is unquestionably one of the most accomplished fighters of the modern era, collecting six world titles in four divisions. The Puerto Rican, a man of few words who let his fists do the talking, sought to test himself against the very best of his era and did so repeatedly during a near-17-year career.

Cotto was born in Providence, Rhode Island, in October 1980. His family migrated back to the sunnier climes of their ancestral home in Puerto Rico when he was 2 years old. He took up boxing when he was 11.

Cotto took silver at the world junior championships and appeared at the Olympics in 2000 before exiting the amateur ranks with a record of 125-23. 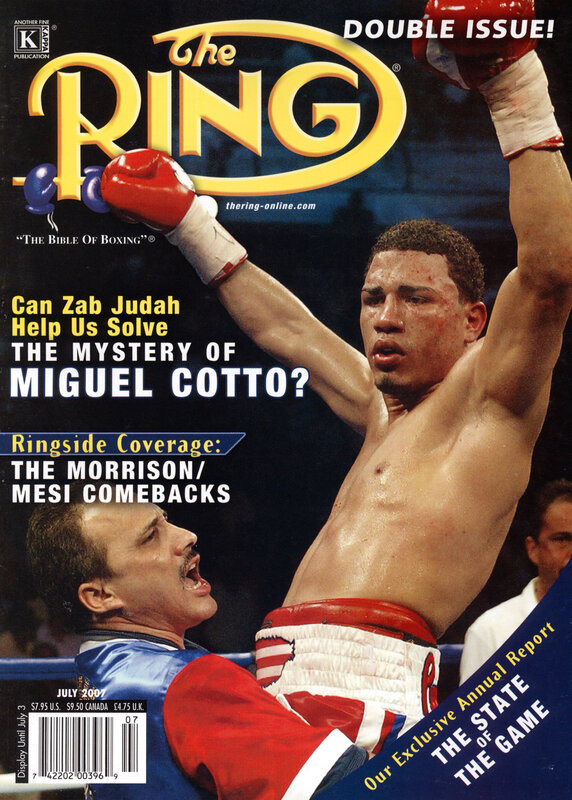 In December 2006, Cotto stepped up to welterweight and stopped countryman Carlos Quintana (TKO 5) for the vacant WBA title. He then stopped Zab Judah (TKO 11) and bested Shane Mosley (UD 12) in 2007. Those wins catapulted him to the top of The Ring’s 147-pound rankings, advanced him up pound-for-pound lists and toward stardom.

In the summer of 2008, Cotto and Antonio Margarito collided in another chapter of the heated rivalry between Puerto Rico and Mexico. Although Cotto took an early lead, Margarito came on in the later rounds and bludgeoned Cotto into his first defeat as a professional. The fight became tinged with controversy when Margarito had his boxing license revoked for improper hand wraps prior to his title defense against Shane Mosley, the fight that followed the Mexican’s victory over Cotto, who suspected foul play in their fight.

To his credit, Cotto rebounded to win the WBO 147-pound title and successfully defended it, but he then lost to a prime Manny Pacquiao in November 2009. Cotto moved up again, heading to junior middleweight to win a world title in a third weight class by stopping Yuri Foreman in nine rounds at Yankee Stadium.

Cotto avenged the Margarito loss before losing back-to-back fights with Floyd Mayweather Jr. and Austin Trout, leading many to believe his glory days had ended. However, the popular Boricua was able to rise again in his spiritual home of Madison Square Garden, dropping Sergio Martinez four times to claim the Ring and WBC middleweight titles by 10th-round stoppage in June 2014.

Adding belts in a fourth weight class was the icing on the cake to a hall of fame-worthy career. The modest Puerto Rican is happy to be in the company of legendary peers such as Wilfred Benitez, Felix Trinidad, Carlos Ortiz and Wilfredo Gomez.

“As a Puerto Rican, I respect all of them, especially Felix Trinidad,” he said. “He knows I feel a lot of respect for him. I have no right to put myself in this league. I just did my work the best way possible. The critics of boxing, it is their job to decide that.”

After losing to Canelo Alvarez, he dropped back to junior middleweight and regained the WBO title. Cotto (41-6, 33 knockouts) retired after dropping a decision to Sadam Ali in December 2017.

Cotto, now 40, is married, has five children and lives in Caguas, Puerto Rico. He owns Miguel Cotto Promotions, which has produced world-class fighters and titleholders. He also owns real estate and gas stations.

“Pinto was a guy who beat me twice as an amateur boxer, and it was just a revenge moment for me. It was a pleasure for me to get my first title and beat him. I had to take this moment to show the world that I have more than him; I became a better boxer than Pinto as a professional boxer. I enjoyed my whole career, I enjoyed every fight, but this one in particular has a better flavor, a special flavor, to become a champion here in Puerto Rico. [After the fight,] I just drove back home and rested with my family.”

“I arrived at the Olympics back in 2000 in Sydney, Australia, with the idea of getting close or winning the medal, but Muhammad beat me as an amateur boxer. Having the opportunity of facing him as a professional boxer was a revelation moment for myself, just to prove again that I was better than the guy who beat me as an amateur boxer. I was a different boxer from the boxer he faced in Australia. I just proved to myself that the sky was the limit for me. … I just woke up every morning to work as hard as I could for every opportunity I got. Not just this fight, [but] every fight at Madison Square Garden. It was just a special place for me to fight. The Garden became my house.” 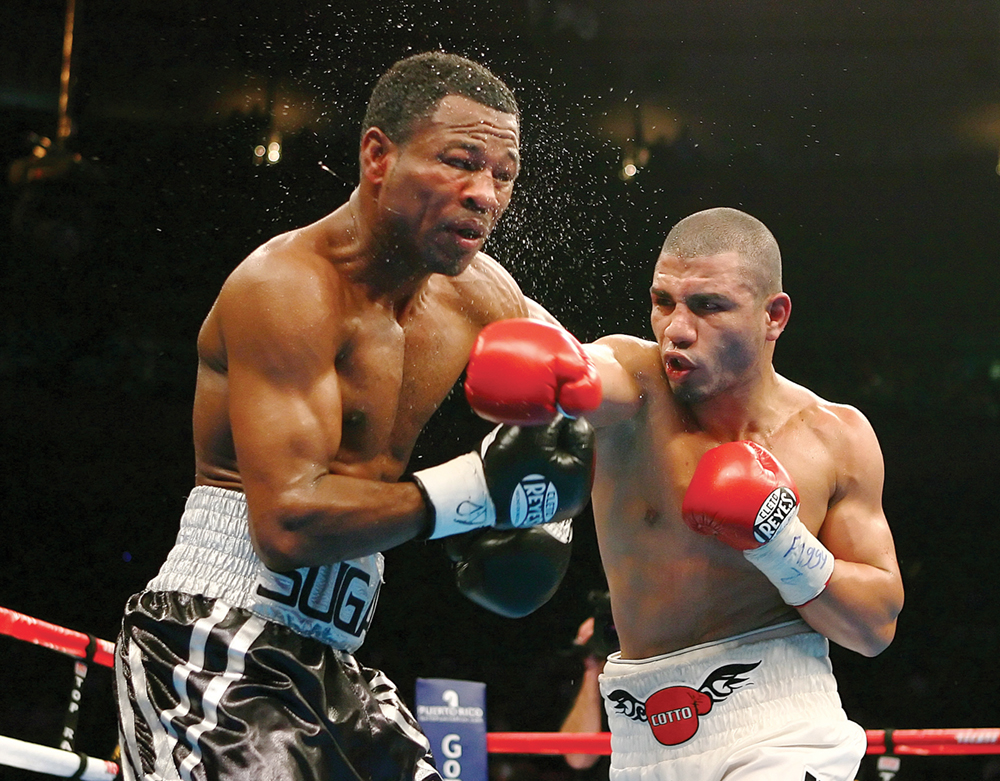 “I believe that he thought he was the quicker, faster one, that he was going to be the better one, but the best thing I did was that I beat him at his own game. Whatever he planned to do to me, I did it in a better way. He was a good boxer; he was a smart boxer. But on this night, I was a better boxer than him. I think Mosley was a revelation in Miguel Cotto’s career; he was a guy who put Miguel Cotto where he’s going to be for the rest of my career. It put me in the best place I [could] be at that moment.”

“We were training in Tampa, Florida, and on a day off from the gym, me and (Miguel Cotto Promotions Executive Director) Bryan (Perez) went to play golf. I was driving the golf cart and I didn’t hit the brakes and we went into a lake. The water covered the golf cart and we had half our bodies covered in water. It was a crazy mess but it was funny. Thanks to God, nothing bad happened to us. Yankee Stadium was one of the best venues, if not the best, I ever fought in my whole career. In there were champions, a legendary Bronx baseball team. It made me feel awesome. I was just concentrating on my boxing fight. I remember a couple of [baseball players] arrived at the locker room – I can remember Bernie Williams was there – but I kept myself occupied. I never talked about it, but I ripped off my left-hand rotator cuff in the second or third round of this fight. I never complained about it. I just kept myself focused on the fight and finally I got the victory. The injury to him (Foreman’s knee was badly damaged) was no one’s fault.” 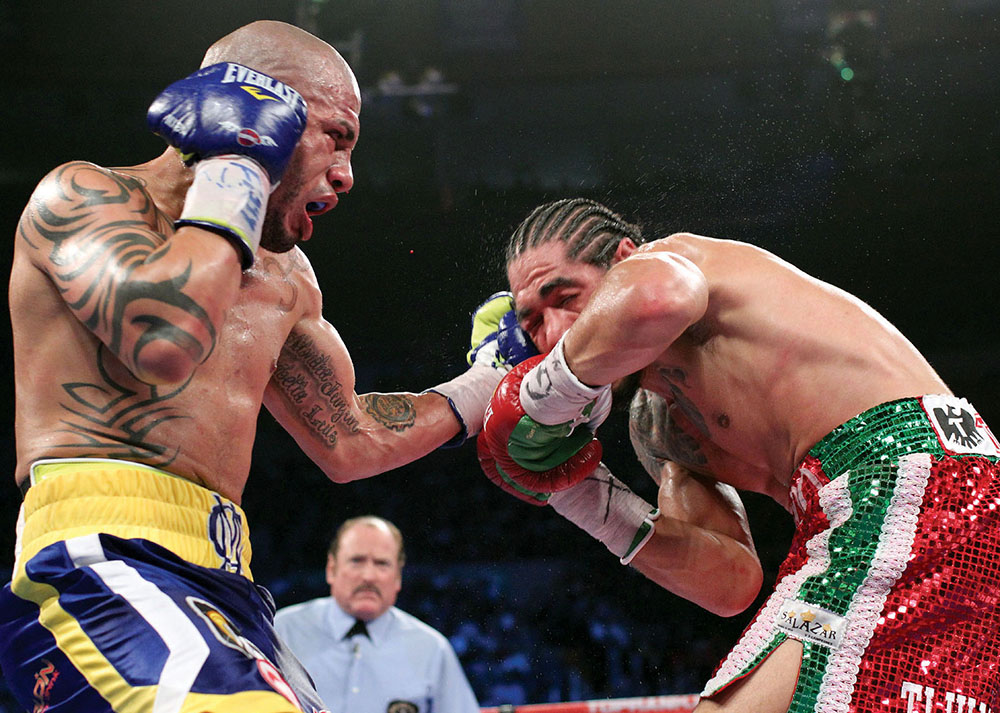 Cotto (L) of Puerto Rico connects with a left handed punch against Antonio Margarito in their rematch. (Photo by Al Bello/Getty Images)

“I think I did the best work that I ever did against any opponent against Margarito. I am not going to respect him, never in my life; he played with my health. Boxing has to be a game of strength, condition and skills, and after that, he put plaster in his hands. I cannot respect that. It was just my moment to prove to the world. That was the fight that gives me the most satisfaction.”

“The thing in boxing, as in the world, side A and side B – he didn’t understand he was side B, and he believed he was taken advantage of. He was talking shit in ways that he didn’t understand how the business works. I was the champion and side B of the equation against Manny Pacquiao and Floyd Mayweather Jr. I just wanted to be the side A of the equation against Martinez. Being a champion in four different weight classes means the world. I can do something no other Puerto Rican boxer could do in their careers. That does not make me better or bigger than them; it is only a number, another championship belt. It was just the biggest accomplishment I got in my career.”