As Oscar Valdez prepares to defend his WBC junior lightweight title for the first time on Friday night, he still is joyful for so many reasons over how he won the title seven months ago.

When Valdez was in training camp getting ready to challenge Miguel Berchelt for the 130-pound belt, he admitted there were times he had his doubts that he would win.

“It was a tough training camp because I was going up against all the odds,” Valdez told The Ring. “There were moments where I was doubting myself because people, experts, fans, including family members and friends, were recommending I don’t take this fight because it was a very dangerous fight and it could end my career.”

However Valdez, a former featherweight titleholder, who vacated and won twice after moving up in weight, had never backed down from a tough fight and wasn’t about to start. Still, he was the significant underdog when he challenged the widely-viewed No. 1 fighter at 130 pounds.

Berchelt had made six successful defenses, including five in a row by stoppage. Many expected Valdez to be his sixth KO victim in a row, in regard to defenses.

“I would hear boxing experts and analysts and my idol, Julio Cesar Chavez, saying that Berchelt was going to knock me out,” Valdez said. “So all of that, it was tough in training camp and, at the same time, I was using that as motivation and fuel to prove people wrong. Stepping in the ring that night, I knew there was no way he could beat me. I don’t think there was any way anybody in the division could have beaten me that night because I was in my zone. I was just feeling great and ready to shock the world and that’s exactly what happened.”

Indeed, when Valdez squared off with Berchelt on February 20 inside the bubble of the conference center at the MGM Grand in Las Vegas, he took him apart in shockingly easy fashion. Valdez dominated, scored two knockdowns and was way ahead on all three scorecards when he turned Berchelt’s lights out in the 10th round, knocking him out face first to win the title with a sensational left hook in a strong contender for “Knockout of the Year.”

“We were practicing that left hook day and night, day and night, me and [trainer] Eddy Reynoso,” Valdez said. “We were going to the body and then going up to the head. We were working that in the gym day and night and that’s exactly what we did. That was a great night. It was definitely one of the greatest nights of my life and something I will never forget.” 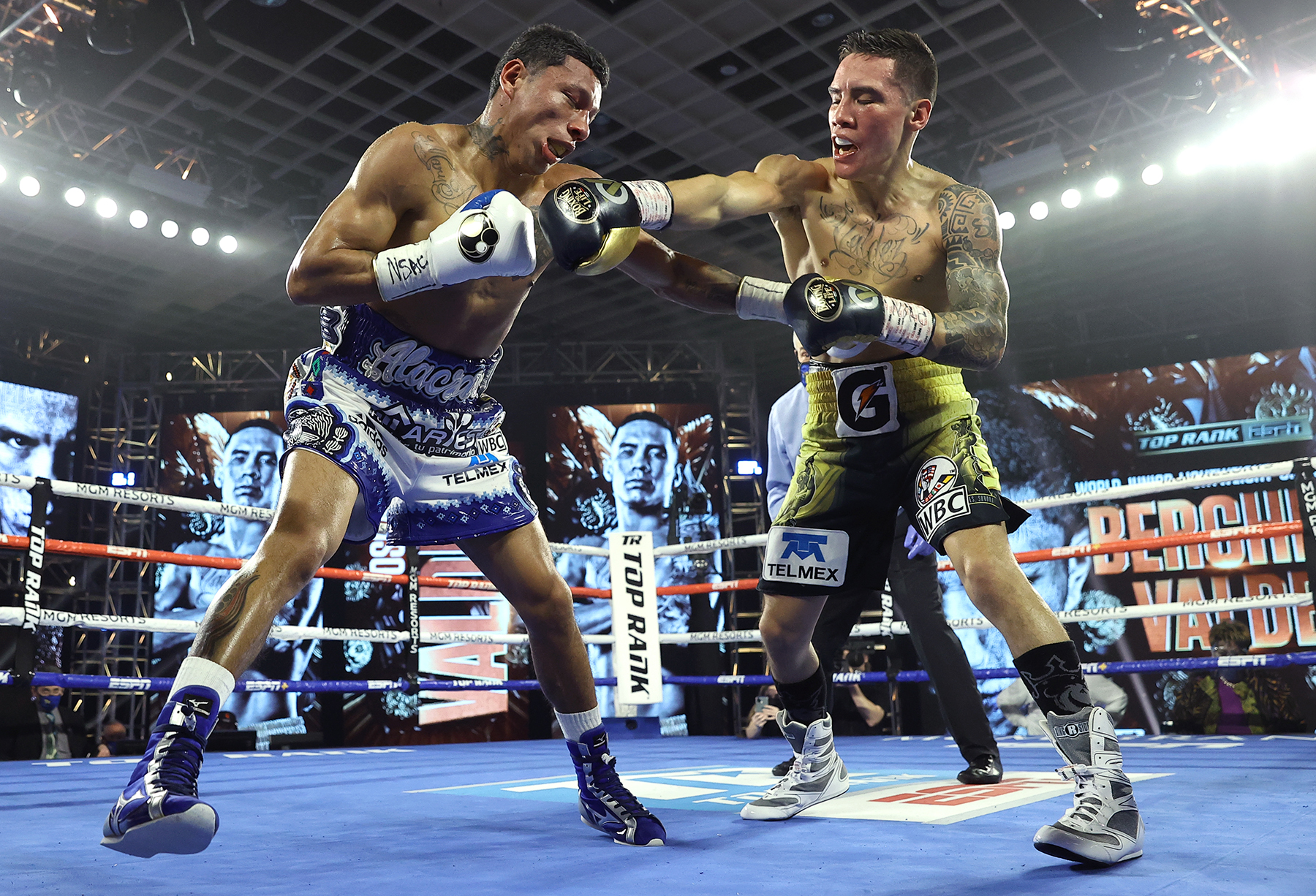 Given the sensational way Valdez ended Berchelt’s night, he is hopeful that it will stand up as KO of the year.

Valdez then listed some memorable knockouts of the year, such as Manny Pacquiao’s over Ricky Hatton and Juan Manuel Marquez’s over Pacquiao.

“People will remember those knockouts forever. If I could get knockout of the year, that would be a great accomplishment, something I will always be happy that I accomplished because then I would have another great story to tell my kids or my grandchildren or the next generation,” Valdez said. “I’m a guy who likes to know a lot of history of boxing and look back at the old clips of Roberto Duran, Salvador Sanchez, Muhammad Ali, Joe Frazier, Sugar Ray Leonard. I’m always looking at boxing history and the records, seeing what age they were when they were fighting for the world titles because I always try to compare myself as far as age difference, how many knockouts they had.”

Valdez and Conceicao will meet in the controversial main event of a “Top Rank Boxing on ESPN+” card, on Friday night, at the AVA Amphitheater at Casino Del Sol in Tucson, Arizona, where Mexico’s Valdez grew up. The preliminary bouts will stream on ESPN+ beginning at 5:30 p.m. ET with the main card tripleheader beginning at 10 p.m. ET.

The controversy stems from the fact that the fight was approved this past Thursday to move forward by the Pascua Yaqui Tribe Athletic Commission, which regulates combat sports on Casino Del Sol’s tribal land, with the WBC agreeing to still sanction the title bout, even though Valdez was positive for the stimulant Phentermine in a random test conducted by the Voluntary Anti-Doping Association on August 13.

The test result was returned on August 30, leaving the fight in limbo for several days until a video conference, followed by the commission and WBC deciding to let the fight go ahead. The reason given was that because, under the code set by the World Anti-Doping Agency, which the commission adheres to, Phentermine is an allowable substance out of competition. WADA – which doesn’t conduct testing but sets rules for what is allowable and what is not – defines out of competition as being from 11:59 p.m. the day before competition through the post-fight sample collection. By that standard, Valdez did not commit a doping violation even though VADA, which Valdez and promoter Top Rank contracted to handle testing for the bout, considers the substance banned at all times because it does not distinguish between an athlete being in competition or out of competition. 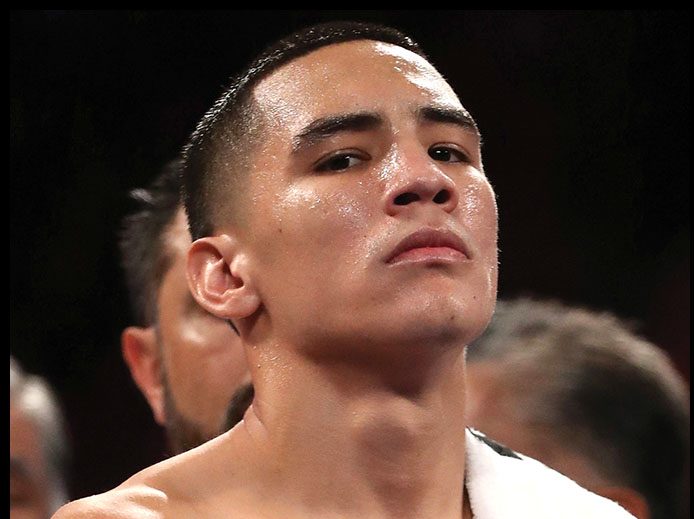 After the fight was allowed to proceed, Valdez, who said he believes his sample was tainted by contaminated herbal tea, said in a statement in a video posted to social media, “My people, I have never used banned substances to enhance my performance. I have never done it. I have been respectful of the anti-doping rules since I was an amateur, Olympian and now professional. Since I became [WBO featherweight] world champion in 2016, I have been VADA-tested more than 30 times. I insisted – in writing – on VADA testing for myself and Robson Conceicao for this fight.

“I would like to thank my manager Frank Espinoza, Top Rank, Eddy Reynoso and my entire team for standing by me throughout this process. I would also like to thank the Pascua Yaqui Boxing Commission for the due process in hearing my case. I will happily comply with the stipulations set forth by the World Boxing Council, to collaborate in the programs, tests and other activities required of me. See you on September 10th in the first defense of my WBC world title in Tucson, Arizona.”

So the fight will take place as scheduled. The Ring’s interview with Valdez took place one day before news of the positive drug test was made public. In that interview, the 30-year-old Valdez (29-0, 23 KOs) explained why the victory over Berchelt was so ultra-significant to him besides just winning another world title.

“That fight meant the world to me because it was very important for a lot of reasons and one of the biggest reasons was, obviously, being able to fight for my dream belt, which is the WBC world championship,” Valdez said. “That’s something I’ve always wanted ever since I was a kid. That’s one thing that made this thing bigger. Another thing was I was given the chance to fight against the toughest 130 [-pounder] out there. I said if I’m going to go for a world title, I’m gonna go against the toughest guy in the division and the toughest guy at the moment was Berchelt. He was knocking everybody out and [I] was going up against a guy everybody was fearing.

“Another thing was the fact that [fans and media] were comparing this fight to my idols, which is Erik Morales and Marco Antonio Barrera. I grew up watching these warriors and I said, ‘Wow, this could possibly be one of those kinds of fights.’”

Even though Valdez dominated in every way possible, he certainly never thought it would be that easy.

“Never ever did it cross my mind,” Valdez said. “I thought maybe it was going to be a war. I always pictured myself victorious. I visualized this fight many ways – brawling, boxing, making the fight dirty, all of them – but I visualized myself winning. The only person who told me this fight would easier than people would think, the only person who would say that was Eddy Reynoso. We were training hard in the gym and he would tell me, ‘You’re gonna win this fight easier than what you think.’

“I would always tell him yes but in my mind, I would say, ‘There’s a reason [Berchelt] is a world champion. Of course, I’m gonna get hit every now and then but it doesn’t matter. I’m gonna win.’ The one guy who said I was gonna win easily was Eddy Reynoso.”

A STATEMENT FROM THE VOLUNTARY ANTI-DOPING ASSOCIATION

OSCAR VALDEZ TESTS POSITIVE FOR PHENTERMINE, TRIBAL COMMISSION WILL DETERMINE IF HE FIGHTS ON SEPT. 10