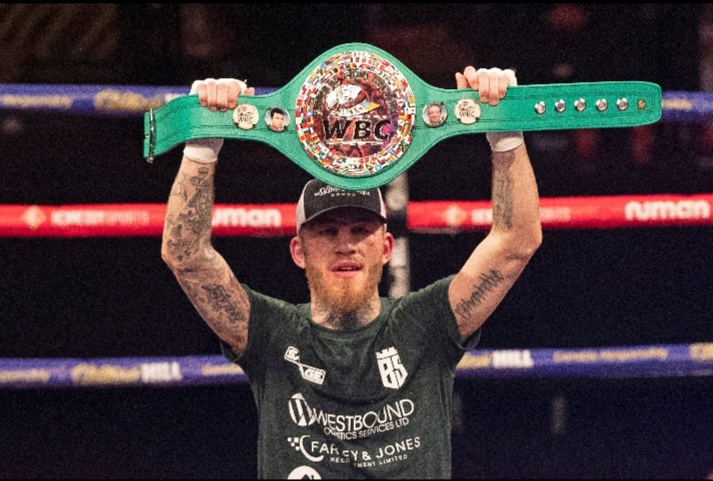 Hard-nosed British battler Sam Eggington will face unbeaten Bilel Jkitou in a scheduled 12-round middleweight contest at the Skydome, in Coventry, England, on Friday.

Eggington, who previously held British, Commonwealth and European titles at welterweight, expects his all-action aggressive style to mesh well with his French opponent.

“I know he comes forward; I know he’s aggressive, from what I’ve heard he’s got fast enough hands, he hits to the body, he does everything decent.” Eggington told The Ring.

The heavily tattooed fighter isn’t one to study an opponent and prefers to let his team, helmed by Jon Pegg, do that.

“I train the same for most fights—I do me,” he said. “I train for myself, not the opponent. It doesn’t matter because I’ve trained to do what I do best and that’s what I’m going to do.”

The ex-forklift truck driver’s form became patchy as he lost to the likes of Hassan Mwakinyo (TKO 2) and Liam Smith (TKO 5). He was on a four-fight winning streak, before he lost a thrilling encounter to Ted Cheeseman (UD 12).

Soon after, he separated from promoter Matchroom.

Under new promoter Mick Hennessy, famed for his work with Carl Froch and Junior Witter, however, Eggington has been able to revive his flagging career at 160-pounds. Though, Eggington openly admits his best chance to achieve something on the world stage likely lies at junior middleweight.

“If a huge opportunity came, I’d like it to be at 154, but at the time we were stuck for opportunities and one came up at middleweight,” he explained. “The (Silver) title was there, the opponent (Carlos Molina) was good, so we took it.

Eggington, who is only 27, knows he’s not the one calling the shots and just wants an opportunity.

“At 154, I’m taking on all comers,” he said. “There’s only two (fighters, Jermell Charlo and Brian Castano) who have the belts. I’d take both fights. I have a feeling there’s not going to be a rematch. The IBF have called their mandatory, I’m pretty sure (Tim) Tszyu is the WBO mandatory now.

“I’m sure a few of the belts are going to go vacant at some point. I’m pretty sure (Jermell) Charlo is going to go up a weight. He didn’t look great at the last weigh-in.”

“The Savage” hopes his fan-friendly style can help him procure that world title fight he craves.

“I’m never in a bad fight,” he said. “I get that’s not why you should get world title fights, but I’ve fought everyone and anyone and I’ve done well. I just need the big opportunity to push for the next level and with Hennessy, I think that’s where we’re going.

“We picked up the WBC silver and that’s given me a good ranking at middleweight, but I’m just waiting for the opportunity. I’m just going fight-by-fight and trying to pick up my rankings.”

Jkitou (15-0, 6 KOs) turned professional in 2015. The 29-year-old Frenchman is largely an unknown quantity. He has operated between junior middleweight and middleweight and won a handful of fringe titles.