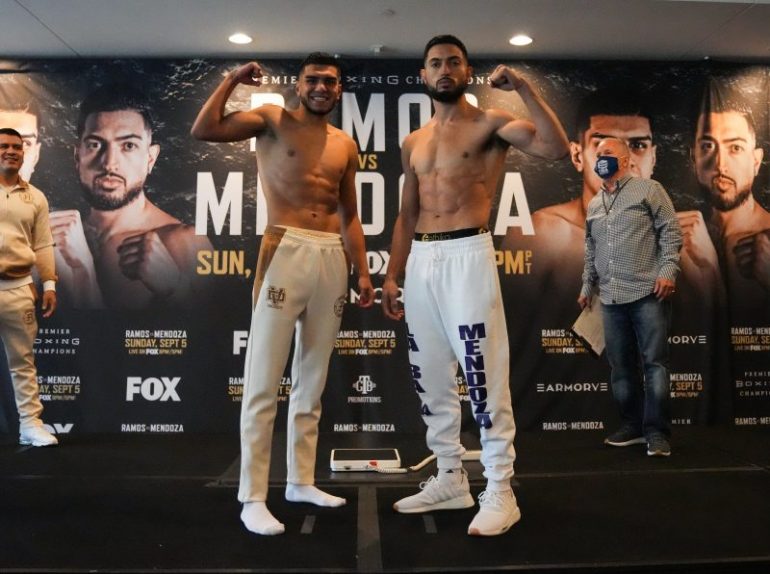 Jesus Ramos Jr. picked up yet another unanimous decision victory in his second appearance in the junior middleweight division, defeating a game Brian Mendoza in a 10-round PBC on FOX main event Sunday at The Armory in Minneapolis, Minnesota.

All three judges scored the bout 98-92 for Ramos, who looked far improved from his first stint at 154-pounds in May.

But the well-prepared Mendoza, who trains out of Las Vegas, had the moments against the 20-year-old phenom. The Albuquerque native was effective with his right hand in the second frame, while Ramos was looking to expose openings behind his jab.

After finding success to the body in the third round, Ramos cut off the ring in rounds four and five, forcing Mendoza to find more real estate to maneuver. However, Ramos was on the prowl and landed several right hooks downstairs that kept his opponent honest.

The body shots began to take a toll on Mendoza as he visibly slowed in round eight and Ramos capitalized as he repeatedly tagged him with straight left hands. However, to the surprise of those in attendance and ringside, Mendoza took the shots well and clinched to survive the round.

Ramos swung for the fences in round nine but Mendoza was able to escape danger. But it was clear that he was in survival mode as he failed to

mount any offense in return even as Ramos was missing badly trying to land the knockout blow.

Ramos was expected by many to get his first knockout win as a junior middleweight, but instead settled for another points win. The rising prospect improved to 17-0 (14 KOs).

In the chief support bout, 135-pound prospect Starling Castillo remained undefeated with a 10-round unanimous decision over former world title challenger Juan Carlos Burgos in a 10-round affair Castillo, of Santo Domingo, Dominican Republic, won by scores of 96-94, 97-93 and 98-92 and improved to 16-0 (12 knockouts).Burgos, of Mexico, dropped to 34-6-2 (21 knockouts).

Castillo—a training stablemate of unbeaten junior middleweight contender Sebastian Fundora— struggled at points in the bout as Burgos came forward and forced him to fight at his pace. The 33-year-old Burgos connected with a looping left hook that caused Castillo’s eyes to roll back in round two.

Castillo went back to superior boxing in rounds four and five behind his jab before Burgos fought his way back in the sixth when he connected with several left hooks to the body of Castillo, who was outworking his adversary in close quarters.

Burgos went for broke in the final 30 seconds but his gas tank proved to be a nullifying factor as Castillo was awarded with the win.

On the undercard, super middleweight Marcos “Madman” Hernandez (15-4-2, 3 KOs) handed previously unbeaten prospect Jose Armando Resendiz (12-1, 8 KOs) his first defeat in a 10-round unanimous decision. Kyrone Davis (16-2-1, 6 KOs) outpointed Martez McGregor (8-5, 6 KOs) in an eight-round light heavyweight contest. The scores were 75-74(x2) and 77-72, all in favor of Davis. McGregor appeared to get the better of his opponent, but was docked three points for a multitude of fouls, including an intentional elbow (2 points), and hitting on the break.