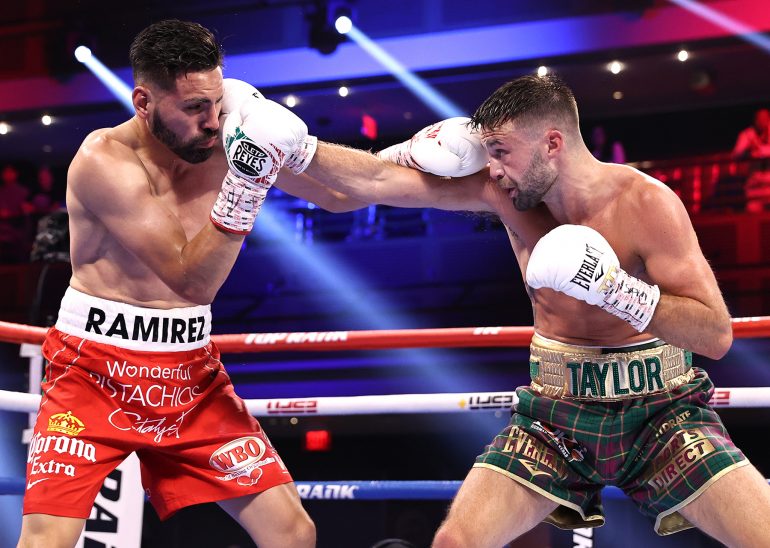 Since defeating Jose Ramirez on May 22 to become the second Scottish undisputed world champion in history, Josh Taylor has been thinking about his long-term goals.

The 140-pounder once dreamed of squaring off against his idol Manny Pacquiao, but that vision sailed down the river when the Filipino was outboxed and outpointed by WBA welterweight titleholder Yordenis Ugas last month in Vegas.

But then Taylor recalled a sparring session with the Cuban.

“My longer-term goal is to become a two-weight world champion by winning a belt at welterweight,” the unbeaten Taylor stated to Sky Sports News. “I can beat these guys.

“Ugas, we sparred in Vegas, and it went well. That’s all I’ll say. It went very, very well. I dropped him.”

“I’m from the old school, what happens in the gym stays in the gym,” he responded on social media.

“If you come to 147 I would love to welcome you. I answer [in the ring]. Porter said [I] was not on his level. Pacquiao said he was the [legitimate] WBA champion. The ring has always spoken.”

Despite his statement, it appeared Ugas had forgotten that it was he that revealed exclusive details of their infamous sparring session on Twitter, including a post from almost four months ago:

“I had an 8-round [sparring session] with Taylor in 2017. It was an intense war. He put on some smaller gloves, it was not cheating, we [allowed] him [to wear the gloves] and in one of the rounds he [landed a hook that] almost sent me to the hospital lol.”

Boxing needs some bad blood-esque matchups and perhaps a sparring session and some trash talk could help Taylor-Ugas become a reality.

But for now, the 30-year-old Taylor (18-0, 13 KOs), who also holds The Ring Magazine title, is focused on making the first defense of his undisputed championship. He faces WBO mandatory Jack Catterall in a homecoming, all-southpaw showdown, at Glasgow’s SSE Hydro on December 18.

“He is a very tough test. He’s 26-0, he has beaten everybody in front of him. There have been no questions asked. We haven’t seen the best of Catterall yet,” Taylor said. “I’ve seen a few of his performances and they haven’t been very impressive.”

However, “The Tartan Tornado” implied that Catterall (26-0, 13 KOs), 28, of Lancashire, who hasn’t fought in a 12-round bout in nearly three years, fights to the level of opposition because he hasn’t faced a fighter that has forced him to dig deep and truly fight to the best of his abilities.

“He hasn’t [fought] the opponents to really fire him up,” offered Taylor. “He will be fired up for this one. It’s his chance to win all the belts and he will do everything in his power to make his dreams come true. It’s my job to make sure he doesn’t.”

Despite the sliver of motivation Taylor hurled towards his opponent, he doesn’t believe Catterall stands much of a chance.

“No disrespect but I am better than him in every department – boxing ability, speed, timing, power, I can fight, I can box. I will have to prove that on December 18,” he said.

“He will have seen my fights and think he has seen holes in my game that he can exploit. I am super-confident and it will take a special fighter to beat me.”