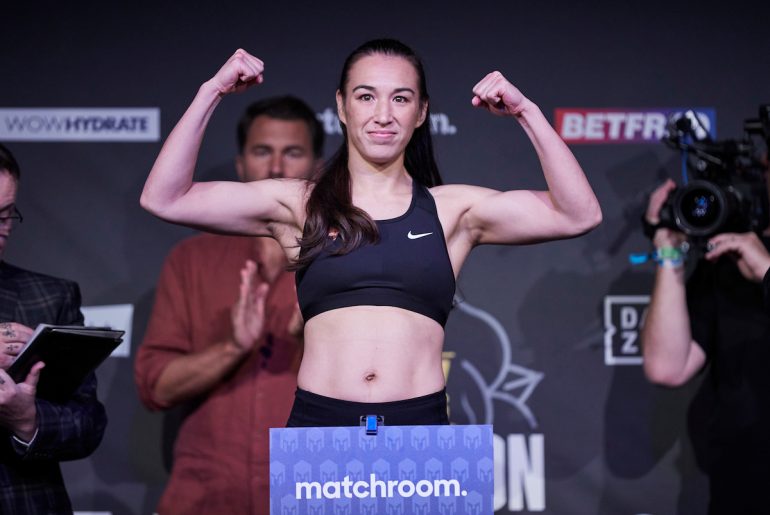 Just making it back to the ring is an accomplishment in itself for Jennifer Han.

The former IBF women’s featherweight titleholder has fought many tough battles in the ring, but her journey to get back to the ring this time around was among her toughest.

The 38-year-old from El Paso, Texas has dropped 75 pounds so far – down from a high of 210 pounds – following the birth of Han’s second child this past February. She isn’t returning against a tune-up opponent, but is jumping straight to Katie Taylor, the undisputed lightweight champion, whom she’ll face Saturday night at the Headingley Rugby League Stadium in Leeds, England.

“Out of this generation of fighters, she’s definitely pound for pound one of the best,” said Han of the Irish star Taylor (18-0, 6 KOs).

“Everybody that’s familiar with boxing knows Katie Taylor, so it’s certainly a privilege to fight the best of the best. But I’ve been a road warrior before, I’ve gone to other people’s countries and not just in the pros but as an amateur and I do have a winning mentality. I believe I have a lot of experience, I’m very technical and I hope that I bring something to this fight that none of Katie Taylor’s previous opponents have.”

Returning to fighting shape presented a new challenge, but Han confronted it head on, driving 45 miles out to Las Cruces, New Mexico for training camp with trainer Louis Burke. There she sparred with a number of fighters from as far as Mexico, and even brought her sister, Stephanie Han, a former top amateur, out of retirement to go rounds with her. She says the style of her sister is similar to Taylor’s, and has adequately prepared her for the highest profile bout of her life.

Han may not have had the acclaim of Taylor, a 2012 Olympic gold medalist, but she’s no one’s opponent. Han first won the IBF featherweight title in 2015, defeating Helen Joseph by unanimous decision to claim the vacant belt. She defended the belt four times before becoming pregnant with her oldest child. After giving birth in May of 2019, the IBF gave her nine months to defend the belt. When her original opponent suffered an unexpected loss, she fought trial horse Jeri Sitzes instead in a non-title bout in February of 2020.

With her weight fluctuating, Han petitioned the IBF to become the mandatory challenger for their title at 135 pounds. Han was set to compete on the undercard of Taylor’s bout with Amanda Serrano, which was scheduled for May 2, 2020 in Manchester, England, before the COVID-19 pandemic canceled those plans.

While waiting for her next opportunity to fight, Han became pregnant with her second child, and her fighting career once again took a back seat.

Shortly after giving birth a second time, her team was contacted by Taylor’s about making a fight together for July, but Han wouldn’t be ready to drop the weight already. When an offer to fight in September was presented, Han felt it was more realistic.

“It’s a lot of weight, and women are amazing. Nobody can do what we do,” said Han.

“When your body stretches out like that and trying to get back to pre-pregnancy, it’s not easy. It’s quite a process, and you have to worry about not getting injured at the same time. It was definitely an obstacle but I think I’ve learned that I have to listen to my coaches and not push too hard because I’m very competitive. We’ve done an amazing job because I feel amazing.”

Returning to fighting shape presented a new challenge, but Han confronted it head on, driving 45 miles out to Las Cruces, New Mexico for training camp with trainer Louis Burke. There she sparred with a number of fighters from as far as Mexico, and even brought her sister, Stephanie Han, a former top amateur, out of retirement to go rounds with her.

Han says she has seen Taylor’s vulnerabilities, and believes she is equipped to exploit them. She points to two of her fights – her first battle with Delfine Persoon, which Taylor struggled in for a majority decision win, and her challenge of Christina Linardatou to win the WBO junior welterweight belt, as proof of her vulnerability.

“My team and I have seen many flaws in Katie’s style. She’s an amazing fighter but she’s not perfect. We plan on capitalizing on that,” said Han.

Taylor, who is three years younger than Han at 35, knows she is in a real fight in Leeds.

“This is a huge fight for both of us, I don’t overlook anybody, I can’t afford to get complacent and when you do it’s when you start to actually lose fights. I have prepared for this fight just like I’ve prepared for any fight. I’m expecting a tough challenge on Saturday, and I’m prepared for that,” said Taylor.

Han says her two children are back home in Texas with her husband, because they aren’t ready to travel the world just yet. But they’ll be back home, watching the ten-round fight on DAZN, on the card headlined by the rematch between Mauricio Lara and Josh Warrington.

Children like shiny toys, and Han plans on returning home with a handful of shiny belts for them to enjoy.