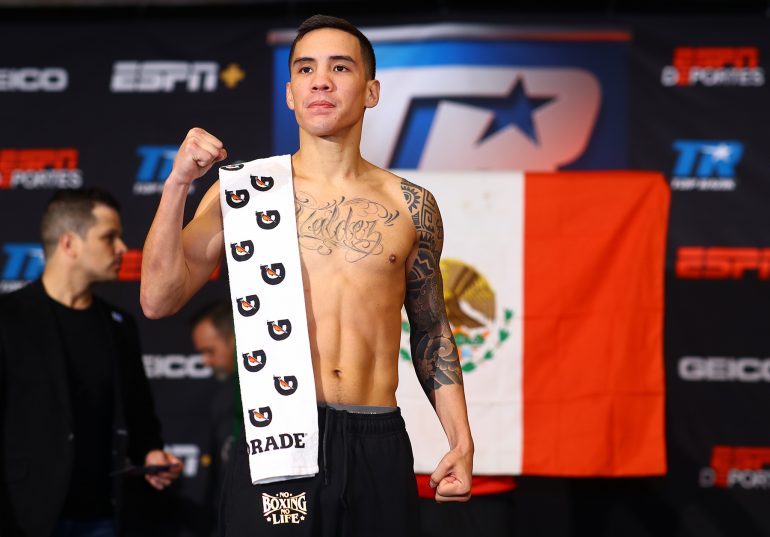 The Oscar Valdez-Robson Conceicao fight will move forward as planned despite Valdez’s recent positive test for the stimulant Phentermine in a random test conducted by the Voluntary Anti-Doping Association on Aug. 13, with the positive test result being returned on Monday, multiple sources told The Ring on Thursday.

WBC junior lightweight titlist Valdez and amateur nemesis Conceicao will meet as scheduled in the main event of a Top Rank Boxing on ESPN+ card on Sept. 10 at the AVA Amphitheater at Casino Del Sol in Tucson, Arizona, where Mexico’s Valdez grew up.

Despite the positive test, the WBC, which makes decisions about the status of the title, and the Pascua Yaqui Tribe Athletic Commission, which regulates combat sports on Casino Del Sol’s tribal land, determined on Thursday that Valdez did not gain a competitive advantage by having a trace amount of the substance in his system.

Valdez’s most recent drug test, which was conducted on Monday, was negative for all banned substances, according to a letter from VADA chief Dr. Margaret Goodman sent to those involved and obtained by The Ring. However, it only takes about 48 hours for Phentermine to clear the system, according to experts.

At issue was which set of drug testing rules would the Pascua Yaqui Tribe Athletic Commission go by. It adheres to the code set by the World Anti-Doping Association, which says in its rules that Phentermine is an allowable substance out of competition, which is defined by WADA as being from 11:59 p.m. the day before competition through the post-fight sample collection. By that standard, Valdez did not commit a doping violation. WADA does not conduct testing but sets rules for what is allowable and what is not.

The drug testing for the fight, however, was conducted by VADA, which tests for all substances at all times and does not distinguish between an athlete being in competition or out of competition. All fighters enrolled in VADA programs get the list of banned substances.

Based on VADA’s standards, Valdez committed a doping violation, but it does not adjudicate testing results. WADA and state and tribal commissions do.

After the positive test result – Valdez’s A and B samples were both positive — Valdez, manager Frank Espinoza, Valdez attorney Pat English, Top Rank attorney Jeremy Koegel, representatives from the WBC and the Pascua Yaqui Tribe Athletic Commission and others spent approximately 1 hour, 45 minutes on a video conference call on Wednesday discussing the fallout from the positive test before the WBC and the commission eventually made their decision the next day.

Valdez is aiming to avenge a significant amateur loss to Conceicao, who beat him in the 2009 Pan American Games finals in Mexico City. Conceicao eventually won an Olympic gold medal at home at the 2016 Rio de Janeiro Games and is getting his first opportunity to face a top opponent.

In Valdez’s last fight, he dominated and brutally knocked out Miguel Berchelt in a knockout of the year contender to take his junior lightweight title in an upset on Feb. 20 inside the conference center of the MGM Grand in Las Vegas.