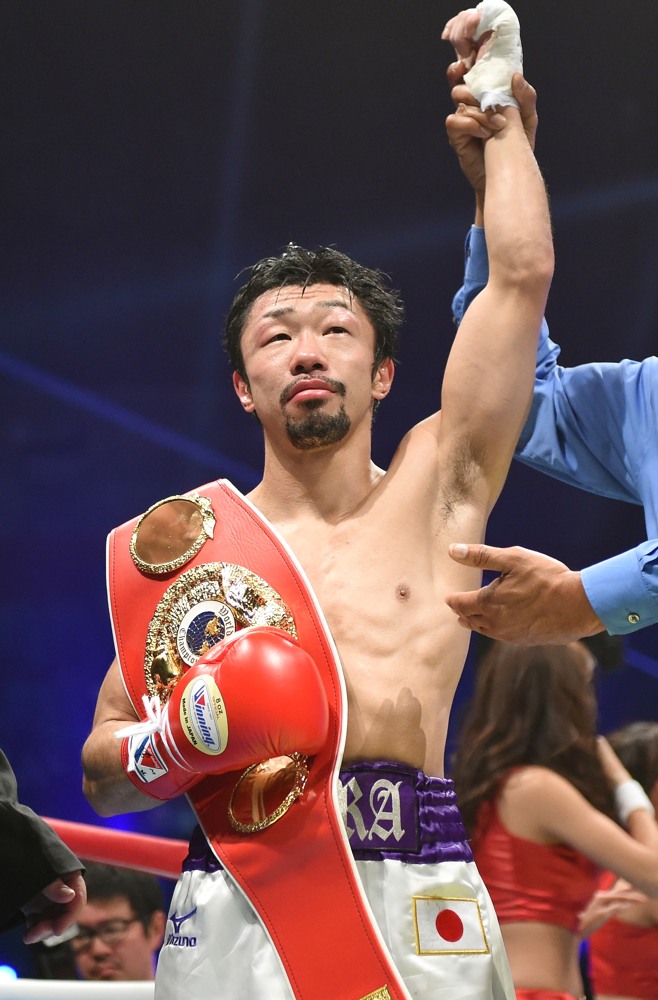 Yaegashi was born in Kitakami, in the Iwate prefecture, in the north of Japan, the middle child of three boys, on February 25, 1983. His father was a system engineer and his mother was a housewife.

“I was never a troublemaker or picked on anybody,” Yaegashi told The Ring through Hank Hakoda. “I played baseball in elementary school and basketball in junior high school.

“I did not know anything about boxing. A friend of mine asked me to join the boxing club in high school when I was 16.”

Things progressed from there and Yaegashi won inter-high school national titles in 2000 and 2002. When he graduated from high school in Iwate, he was able to bring the two worlds together.

“I came to Tokyo to attend Takushoku University,” said Yaegashi, who went 56-14 in the amateur ranks. 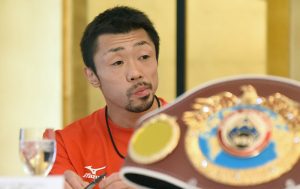 The man leaves behind a solid record and rep as a willing warrior. Photo by Naoki Fukuda

“It is one of the leading authorities in amateur boxing. I studied economics at Department of Economic in Faculty of Political Science and Economics. I spent a lot more time on boxing than studying though,” he said, laughing.

Yaegashi decided to turn professional under the guidance of former two-time strawweight titleholder, Hideyuki Ohashi, of the Ohashi Boxing Gym.

“I liked the active and energetic atmosphere led by Katsushige Kawashima, who was the first a world champ from the gym,” he explained. “I never dreamed of becoming a world champ. I vaguely had an eye on a Japanese title in the beginning.”

He quickly moved past that level and claimed the OPBF 105-pound title in his fifth fight. After one defense, he was given a surprise shot at WBC strawweight titlist Eagle Den Junlaphan in June 2007.

It proved to be too soon and Yaegashi was widely outpointed over 12 rounds. After returning with a win, he was upset by unheralded Masatate Tsuji (MD 6).

“I had developed a strong mindset to overcome adversities since I was a kid,” he explained. “I scored a KO victory over a young [Srisaket] Sor Rungvisai, but he was not at all what he is today.”

Yaegashi then won the Japanese 105-pound title and added layers of experience, defending the title on three occasions, while building toward another title opportunity. It came against WBA beltholder Pornsawan Porpramook in October 2011.

“I knew I would never get another chance for a world title fight if I lost to Pornsawan Porpramook,” said Yaegashi, who stopped the defending titlist in 10 rounds. “The fame of winning a belt did not change me.”

Then his team thrashed out a deal with WBC titleholder Kazuto Ioka’s representatives for the two fighters to meet in a unification in June 2012.

“My manager said this [fight] was a now-or-never, due to Ioka’s weight struggles, so I accepted every condition Ioka wanted, including fighting in his hometown Osaka, his sponsors, TV station and so on,” Yaegashi explained. “I enjoyed my role of ‘shadow’ who served as a foil to him.

“Before the encounter, I knew that I would face a big hurdle to break his high-quality boxing skills. However, he unexpectedly chose to go a toe-toe with me, which was a battle of mutual pride, resulting in a fantastic matchup.”

The fight was evenly contested all the way through with Ioka barely edging matters by hard-fought 12-round unanimous decision.

Unperturbed, Yaegashi decided to jump to flyweight and after one fight met The Ring and WBC titlist Toshiyuki Igarashi in April 2013.

“[Igarashi] never lost to me in our four encounters as amateurs,” said Yaegashi. “I knew he was confident. I was not good against southpaws. Mr. Ohashi recommended that I should watch the video of his former rival Jung Koo Chang to learn how he beat a sneaky southpaw, [like he did against] Hilario Zapata in their second showdown. It all worked out against Igarashi and I got his belt. Mr. Ohashi’s intuitive and perceptive advice has always been spot on.”

Yaegashi went on to make three defenses, all against Mexican challengers.

“I actually thought I was going to lose to former [WBC junior flyweight] champ Edgar Sosa,” he admitted. “I handled him better than I had expected. I was at my peak when I fought in flyweight.”

Then came Roman Gonzalez, who was stepping up to 112 pounds in September 2014.

“Roman Gonzalez was a boxer by nature, a short-range specialist who always located his feet in the best possible position,” explained Yaegashi, who was stopped in nine rounds. 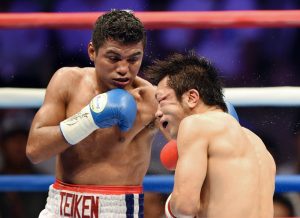 One of seven losses came courtesy of Chocolatito. Zero shame in that fact.

The Japanese fighter decided to drop to junior flyweight when he met Pedro Guevara for the vacant WBC title in December 2014.

“I made a big mistake in putting too much weight back on after the weigh-in,” explained Yaegashi, who was stopped in seven rounds. “I knew why I lost the bout, so I never thought of retiring from boxing at all. I had an unfinished business in this division.”

Although Yaegashi didn’t contemplate retirement, others believed his best days were behind him. He won two low-level fights and on New Year’s Eve 2015, he met IBF titlist Javier Mendoza.

“That was my big revenge on the light flyweight division,” he said proudly, after edging the defending champion by 12-round split decision.

Yaegashi made two defenses before he was stunningly stopped in one round by Milan Melindo in May 2017.

“There was no excuse, my preparation and conditioning went well,” he said. “I do not know why that happened, either. He just hurt me with the first punch that sent me to the floor.”

Again, it looked the end of the road but he had one more title run in him and after three low-level stay-busy fights he met IBF 112-pound ruler Moruti Mthalane in December 2019. 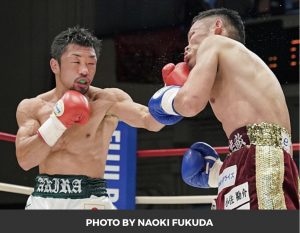 “Moruti Mthalane had a solid boxing style, he had very strong hands,” explained Yaegashi, who was stopped in nine rounds. “My hit and move away style was effective in the early rounds. I realized he did not want to fight at close range and changed my plan to fight on the inside. In Round 7 or 8, a combination damaged my left eye. I saw three of him and lost my sense of distance. I had to keep fighting, the fight regrettably ended [in Round 9] before I adjusted myself to the distance.”

The Japanese fighter retired with a record of 28-7 (16 knockouts).

Yaegashi, now 38, is married and lives with his wife and three children in Yokohama. He runs a restaurant with his wife and is a commentator on Fuji TV. The ex boxer remains close to the Ohashi Boxing Gym, where he is the trainer of young prospect Ryutaro Nakagaki and popular K-1 champion Yoshiki Takei.

BEST JAB
Kazuto Ioka: Kazuto Ioka’s biggest asset was his jab. It was not easy to dodge his savvy jabs, which were hard to see due to a minimum motion and an unpredictable timing. Those were the best jabs that I ever experienced. I took many effective jabs that resulted in my badly swollen face.

BEST DEFENSE
Ioka: Kazuto Ioka was the toughest for me to land clean shots on. He was a fully equipped fighter at a very high level. He had everything you would expect a boxer to have.

BEST FOOTWORK
Den Junlaphan: He did not have busy footwork and his feet tended to be firmly on the ground. He had precise footwork to instantly change his position at necessary points. He kept me out of distance and controlled his ground.

SMARTEST
Roman Gonzalez: Roman Gonzalez was poker-faced all the time and it was hard to read what was in his mind. I felt that he saw right through me every moment when I threw punches.

STRONGEST
Gonzalez: I believe Roman Gonzalez was in his prime at flyweight, where he could take advantage of his physical strengths most. I was not able push him back.

BEST CHIN
Edgar Sosa: I landed a lot of effective punches to dominate the fight, but Edgar Sosa never showed his pain and emotion on his face. I stopped trying to a knock him out and changed my fight plan to outbox him.

BEST PUNCHER
Eagle Den Junlaphan: Roman Gonzalez was more about skill than a hard-puncher. His punch was more effective than powerful, and he had pin-point accuracy with all punches and combinations. Moruti Mthalane seemed to have very strong fists that allowed him to throw firm punches, but he was not a one-punch finisher. When I lost to Guevara, it was more my own problem than how he fought or how strong his punches were. Against Melindo, the fight ended so soon and I could not analyze him enough. I just did not know what happened. Eagle Den Junlaphan hit me harder than any other fighters. Every punch he threw was devastating and gave me serious damage. I somehow survived until the final bell, I suffered severe damage in Round 1 and a knockdown in round 10. I had my jaw fractured during the bout.

BEST BOXING SKILLS
Gonzalez: Roman Gonzalez’s biggest asset was not his power, nit was a wide range of skills. He was particularly skilled at dodging his opponent’s punches and landing his own, even in the midst of an intense exchange of punches. He could throw a series of accurate punches seamlessly.

BEST OVERALL
Gonzalez: Roman Gonzalez deserves this category. He was definitely the best all-round fighter at the time when he fought me. He did not let me fight as I wanted to because of his super high skills and boxing IQ. He was the best of his era at flyweight.