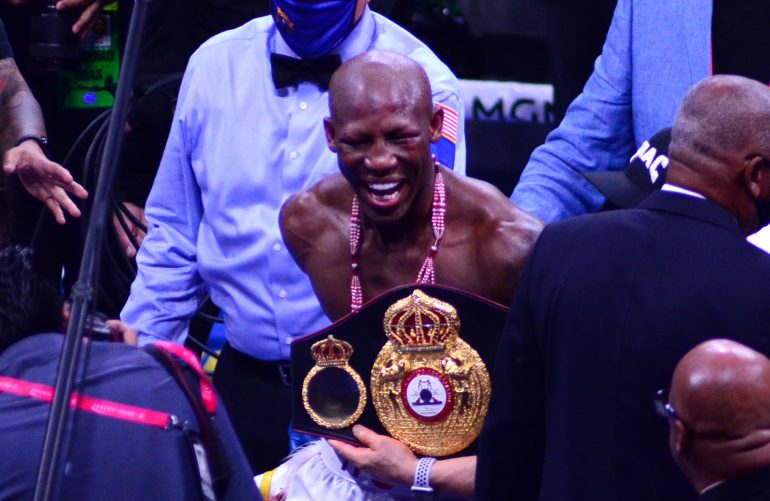 Ugas solidified his credentials as a world titleholder and a player in the welterweight division with his points win over Pacquiao. Photo by German Villasenor
31
Aug
by Doug Fischer

We hope you appreciated Manny Pacquiao’s willingness to challenge Errol Spence and then Yordenis Ugas (after Spence had to pull out from their August 21 showdown due to a detached retina), as well as the losing effort the 26-year veteran put forth against the dangerous late substitute, because elite boxing talents with the ability, bravery and longevity of the 42-year-old Philippines senator only come around once a lifetime – if we’re lucky.

We don’t know if we witnessed Pacquiao’s swan song vs. Ugas, but for now he will remain in The Ring’s welterweight rankings until he formally announces his retirement or is inactive for more than a year without having a bout scheduled. 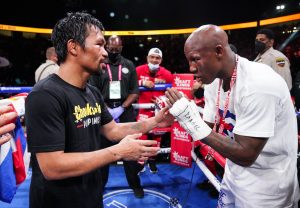 Ugas was honored to share the ring with Pacquiao and fans feel the same about having watched his legendary career unfold. Photo by Sean Michael Ham/TGB Promotions

Ugas (27-4, 12 KOs), who boxed brilliantly against the eight-division world titleholder en route to a unanimous decision victory, replaced Pacquiao at No. 3 in the welterweight rankings (behind Spence and Terence Crawford). Pacquiao (62-8-2, 39 KOs), who made his U.S. debut (an IBF 122-pound title-winning stoppage of the late Lehlo Ledwaba) 20 years ago, dropped to No. 5.

“Yordenis Ugas did enough to outpoint the great Manny Pacquiao over 12-rounds,” remarked panelist Anson Wainwright. “Father Time is the one opponent nobody can beat.”

The Ring Ratings Panel recognized this move as an indication that we won’t see Davis making 130 pounds again.

Wainwright noted the action and suggested for a replacement in the 130-pound rankings.

“If we take (Davis) out, move everyone up a place and bring in Xavier Martinez,” he said.

Tom Gray supported the notion of dropping Davis from 130. Adam Abramowitz and Diego Morilla supported Martinez entering at No. 10.

RING RATINGS UPDATE (as of Aug. 28; this does not include the results from the Jake Paul-Tyron Woodley undercard, which included a bout with rated junior welterweight Ivan Baranchyk, who was stopped by unrated Montana Love)

Welterweight – Yordenis Ugas advances to No. 3. Manny Pacquiao drops to No. 5.

“Some may complain that we rate Ugas over (No. 4-rated) Shawn Porter since Porter owns a head-to-head victory,” stated panelist Martin Mulcahey, “but Ugas has a better record of late and many, myself included, think he did not get a fair decision in that fight. So yes, Ugas to No. 3 and Pacquiao down to No. 5.”

“I agree Xavier is the obvious and maybe best choice (to enter the rankings), but let’s not forget that Azinga Fuzile’s lone loss (to top 10 guy Rahkimov) came with controversy, so I think he deserves some thought on the No. 10 slot,” said Mulcahey. “(Fuzile) looked great in his last outing on DAZN, taking out Martin Ward. My dark horse is Joe Noynay, who’s not top 10 ripe yet but has some good road wins that I think will help cause an upset down the line here.”

“This win justifies his current position,” said Wainwright. “He may have moved up a little previously on attrition. I would keep him where he is, but he will likely move up after the result of Lara-Warrington 2.”

ONES TO WATCH (according to Anson and Martin):

“Universum boxing had a keep busy card in Hamburg, Germany, and Cuban heavyweight Larduet may be someone to keep an eye on,” said Mulcahey. “Looks like ‘King Kong’ Ortiz type, his accuracy elevates his punching power, and he has a good skillset, of course, coming out of Cuba but is already 31.”

“Martin looks legit,” said Mulcahey. “He did not get frustrated and kept focused going 10 rounds. Not sure he can keep making 135 but he seems a threat at lightweight or junior welter.”

“Previously, Castro had been at 122, now it looks like he’s competing at 126,” said Wainwright. “Good win and one that moves him closer to a title shot.”