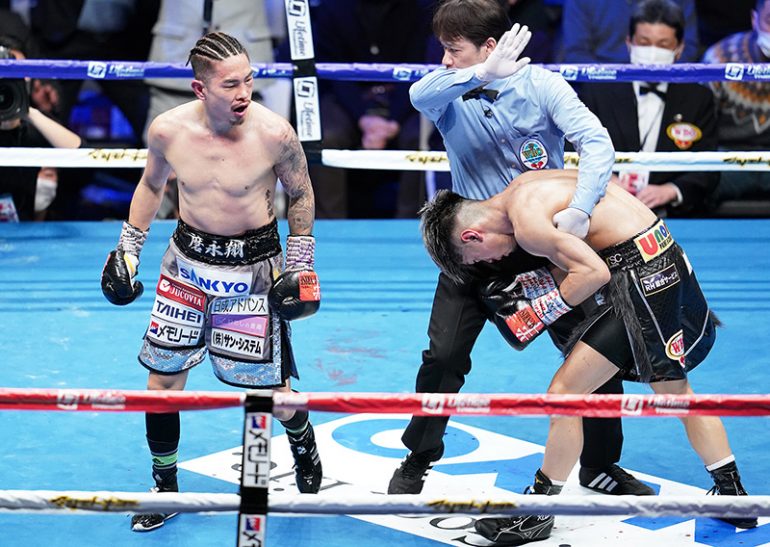 Ioka, who is rated No. 3 by The Ring at 115 pounds, openly admits that he isn’t too familiar with his Mexican opponent.

“I’m not sure what will happen until I’m in the ring,” said the Japanese star who has held world titles in four divisions. “[Rodriguez] has lots of experience, which is a big component to fighting in a championship contest. He has been a champion at strawweight and I think he is skilled as well.

“I will show him the power I have in the ring. I don’t think I will allow him to do anything to me and [I will] prove to him that I am at a different level as a champion.”

The 32-year-old Ioka was rightfully lauded for his comprehensive eighth-round demolition of the previously unbeaten three-weight world titleholder Kosei Tanaka in December. That triumph catapulted him into The Ring Magazine’s mythical pound-for-pound list at No. 10.

“To receive recognition as [a] pound-for-pound [fighter] worldwide meant a great deal to me as far as respect,” said Ioka. “I still have goals to gain more recognition in the world, there is much more to achieve. My goal is to unify the belts.”

Ioka (26-2, 15 knockouts) would like to test his mettle against the likes of Ring Magazine, WBA and WBC titleholder Juan Francisco Estrada, the legendary Roman Gonzalez or two-time 115-pound beltholder Srisaket Sor Rungvisai. However, he’s aware that the trio is in the midst of a series of fights and that he’ll have to wait patiently for his opportunity.

“I can only control my own destiny,” Ioka said. “The plan is to win this fight, then hope for a unification fight with the IBF champion [Jerwin Ancajas.]”

Rodriguez, who is rated No. 7 at 115 pounds, lost to future hall-of-famer Roman Gonzalez (TKO 7) early in his career. However, that setback proved to be a valuable learning curve and he bounced back to defeat Merlito Sabillo (TKO 10) for the WBO 105-pound title before adding the IBF belt in a unification bout with Katsunari Takayama (UD 12).

The Mexican soon moved up to junior flyweight but lost back-to-back decisions to Donnie Nietes (UD 12) and Moises Fuentes (SD 12) in 2015. He has since moved up in weight again and is currently on a 15-fight win streak that includes wins over former titleholders Hernan Marquez (KO 3) and Oswaldo Novoa (UD 10).

Now 28, Rodriguez had been due to face countryman Julio Cesar Martinez for the WBC flyweight title late last year. Martinez, however, was injured and the bout was called off. The challenger’s record is 34-4-1 (24 KOs).