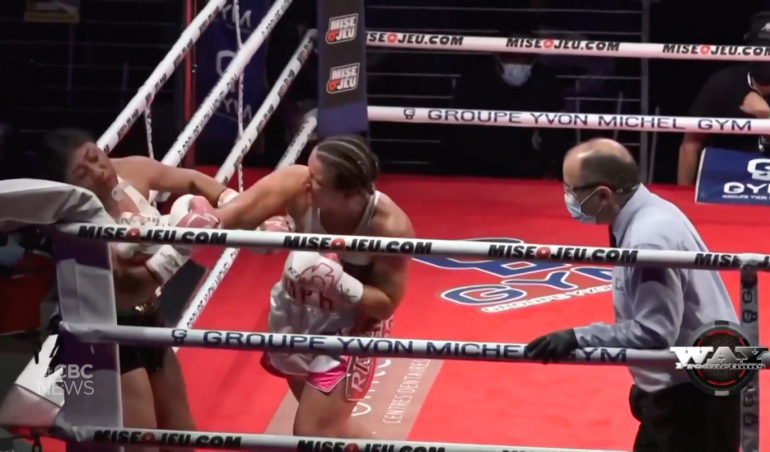 Zapata, 18, was taken by ambulance to Sacré-Coeur-de-Montréal hospital after going into a seizure following a series of power shots that left her stunned at the end of round four. Zapata was unable to walk back to her corner, and the fight was waved off after the bell. Zapata’s right arm began to convulse, and her legs went limp, at which point she was laid onto the canvas for medical personnel to attend to.

Little else is known about her condition, including whether she remains conscious or not.

Promoter Yvon Michel, who organized the fight card Saturday night at Stade IGA in Montreal, expressed how dire the situation is in a tweet on Sunday, as he wished the best for the Mexican fighter.

Zapata was accompanied to the hospital by her boyfriend, boxer Jovanni Martinez, who lost a four-round decision to lightweight prospect Mazlum Akdeniz on the same card, as well as two representatives from the promotional company, Groupe Yvon Michel.

The loss is the third straight stoppage defeat for Zapata (2-4), a welterweight from Aguascalientes, Mexico. Zapata was stopped in three rounds by Alma Ibarra in 2018, after which she remained out of the ring for nearly three years. Zapata returned this past May, suffering a sixth round knockout to Cynthia Lozano, and then was back in the ring three months later for the Houle fight.

“This is not the thing you want to see,” said Houle, according to Canadian press reports. “I was definitely going for the knockout, but I would have preferred her to come out on her feet, not lying on a stretcher. We’re keeping our fingers crossed that everything goes well.”

(RELATED: Danger is omnipresent for female fighters, too)

Serious injuries in women’s boxing tend to occur less frequently, given the shorter duration of women’s bouts. Saturday’s bout was scheduled for six rounds, while women’s championship bouts are usually a ten round duration instead of the twelve rounds allotted to men. Women’s rounds are also a third shorter, at two minutes instead of three.

Frida Wallberg, the former WBC junior lightweight titleholder from Sweden, suffered a cerebral hemorrhage in her 2013 bout with Diana Prazak, but was able to recover. Rita Figueroa also suffered a severe injury in the ring, when a blood vessel in her brain ruptured during her 2009 fight with Kita Watkins. Figueroa underwent emergency surgery and was able to go on to a career as a trainer.