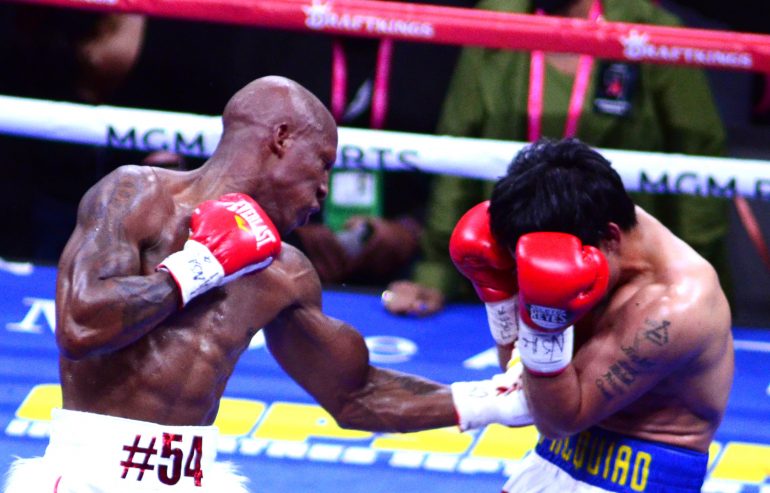 Pacquiao was consistently beat to the punch by Ugas. Photo by German Villasenor
21
Aug
by Dan Rafael

LAS VEGAS – Yordenis Ugas, a little known fighter with a dubious claim to a welterweight world title, is a lot more well known now and can rightfully claim the belt.

Riding a strong right hand and jab, Ugas outpointed heavy favorite Manny Pacquiao, and may have sent the Filipino legend into retirement, as he retained the WBA title before a pro-Pacquiao crowd of 17,438 on Saturday night at T-Mobile Arena. 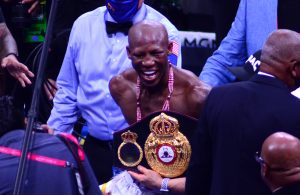 Ugas solidified his credentials as a world titleholder and a player in the welterweight division with his points win over Pacquiao. Photo by German Villasenor

“I’m a warrior. I’ve been doing this since I was six years old. I knew deep down inside he wasn’t going to beat me tonight,” Ugas said through an interpreter. “I felt that coming into the fight. We had a plan. We were going to move him, jab him. That was the key to the fight — move him and keep him off balance. That was the game plan.”

Ugas, The Ring’s No. 5-rated welterweight, was not even supposed to be facing Pacquiao, but wound up in the fight on 11 days’ notice when unified titlist Errol Spence Jr. was ruled out against Pacquiao after he was diagnosed with a torn retina in a pre-fight medical exam.

Because Ugas’ opponent in the co-feature, Fabian Maidana, suffered a cut around the same time as Spence’s diagnoses, Pacquiao and Ugas agreed to meet in the new main event of the Fox Sports pay-per-view – and Ugas toppled one of the most iconic fighters in history.

“I did my best tonight but my best wasn’t good enough. No excuses,” Pacquiao said. “Tonight the champion was named Ugas. I’ve done a lot for boxing and boxing has done a lot for me. Now I want to spend time with my family and think about my future in boxing.

“I am a fighter inside and outside the ring and look forward to getting back to the Philippines and serving the people in the Philippines. Congratulations to Ugas and his team.”

The judges had it 116-112, 116-112 and 115-113 for Ugas, who at one point was out of boxing for more than two years after suffering a couple of losses and having had problems making the junior welterweight limit of 140 pounds. But when Ugas decided to resume his career, he found trainer Ismael Salas, moved up the 147-pound welterweight division and now is 12-1 since the return, losing only a highly disputed decision to Shawn Porter, challenging him for a welterweight world title.

“I had some two years off, I came back, I got the right team behind me and I felt I couldn’t be beat,” Ugas said.

The 35-year-old Ugas (27-4, 12 KOs), a 2008 Cuban Olympic bronze medalist, who defected and fights out of Miami, got the victory against a Pacquiao who looked ragged at age 42 and having not fought since he won the WBA title by decision in a masterful performance against then-undefeated Keith Thurman in July 2019 to become, at age 40, the oldest welterweight champion in boxing history.

But Pacquiao was unceremoniously stripped in January, supposedly due to inactivity, despite the global coronavirus pandemic that kept many boxers sidelined. Ugas, who had claimed the secondary title, was elevated to take the belt that had belonged to Pacquiao, and he said for the past two weeks that whatever the status of the belt he would prove he was the rightful holder.

He did just that and may have brought down the curtain on Pacquiao’s legendary 26-year career in which he set various boxing records, including winning titles in eight weight classes (flyweight and junior featherweight to junior middleweight), winning the lineal title in five divisions (flyweight, featherweight, junior lightweight, junior welterweight and welterweight) and holding world titles in four decades (1990s, 2000s, 2010s, 2020s).

“I’ve been living under Manny’s shadow for a year,” Ugas said. “Now we fought in the ring to find out who the champion is. We decided it in the ring.”

Pacquiao said he was hampered by cramps in his legs.

“I know his style, but the thing is I want to do my plan but my two legs were cramping. I could not move around,” Pacquiao said. “I am not making excuses. (In my) early days I would move around and outbox him but this time my two legs were hurting me in the second round to the 12th round, but I am not making excuses. I tried countering him. So that’s boxing. I’ve done a lot in boxing and I’m happy we’re safe.”

He attributed his leg issues to “too much hard work, training. I run in the mountains. I don’t know. We’re not young anymore.”

The fight began at a measured pace with Pacquiao darting in and out with Ugas looking to counter. The crowd soon began to chant “Manny! Manny! Manny,” which it would at various times throughout the fight, and the round ended with Ugas shoving Pacquiao to the canvas.

The action picked up in the third round as Ugas landed a solid right hand and Pacquiao’s right eye began to swell. There were several exchanges and Pacquiao fired combinations and landed a good left hand.

After Ugas landed a low blow with his right hand early in the fourth round, referee Russell Mora warned him and gave Pacquiao time to recover. 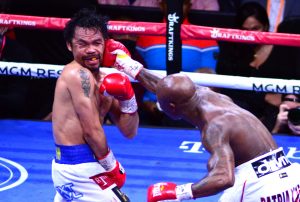 Ugas’ right hand was a key weapon vs. Pacquiao. Photo by German Villasenor

The fight never really found an offensive flow, although there were some good exchanges, such as in the sixth round when Pacquiao connected with an uppercut and Ugas responded with two good right hands.

Ugas’ right hand was a big factor for him and he landed some excellent ones early and late in the eighth round. Mora warned Ugas for shoving Pacquiao to the mat early in the ninth round.

There were plenty of close rounds, but whenever Pacquiao landed anything the crowd erupted, like in the 10th round when he landed a nice combination. But Ugas was steady with his right hands and made several rounds hard to pick between the two.

Ugas, perhaps feeling he really needed the 12th round, had perhaps his best round of the fight, landing numerous hard right hands upside Pacquiao’s head for which Pacquiao had little response.

When it was over they both raised their hands in victory even though Pacquiao’s battered and swollen face did not make him look like a winner.

It was 20 years ago this summer that Pacquiao arrived on these shores from the Philippines as a little known former flyweight champion and weeks later found himself as a late replacement opponent to challenge Lehlo Ledwaba for his junior featherweight title at the MGM Grand.

He destroyed Ledwaba to win the 122-pound title and set in motion a two-decade run of greatness that may have finally concluded with the loss to Ugas.

“I hate to see the day he retires but this could be it,” Freddie Roach, Pacquiao’s Hall of Fame trainer, said. “He didn’t have a great performance tonight.”

Ugas said if Pacquiao wants a rematch he will gladly give it to him.

“Two hundred percent. Manny is a great legend, a great fighter,” Ugas said. “If he wants a rematch, no question about it. A legend like that deserves it.” 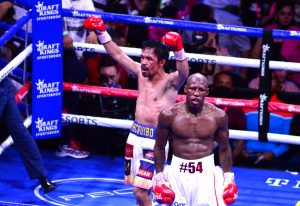 Pacquiao proved to be a physical marvel even in a loss. Photo by German Villasenor

But most thought a loss would end his career, especially because those around him believe he will seek the presidency of the Philippines. The election is in May and Pacquiao said this week he will announce whether he is going to run in September.

While he has professed that he still loves boxing, Father Time appears to have caught up to him. He also has said repeatedly that he feels the pull of public service as a way to help the many poor in his country. If he decides to retire in favor of continuing his career in politics and public service, he may walk away from the ring as a loser but as a winner in his life.

“I want to fight but the thing is I have to consider my body,” Pacquiao said. “There’s a lot of things I need to accomplish to help people. That’s my mission. I want to be an inspiration to all the people, especially the Filipino people.

“You may not see Manny Pacquiao in the ring in the future. But I am so happy with what I have done in boxing.”