Manny Pacquiao: My title was given to Ugas. That is not how you become a champion 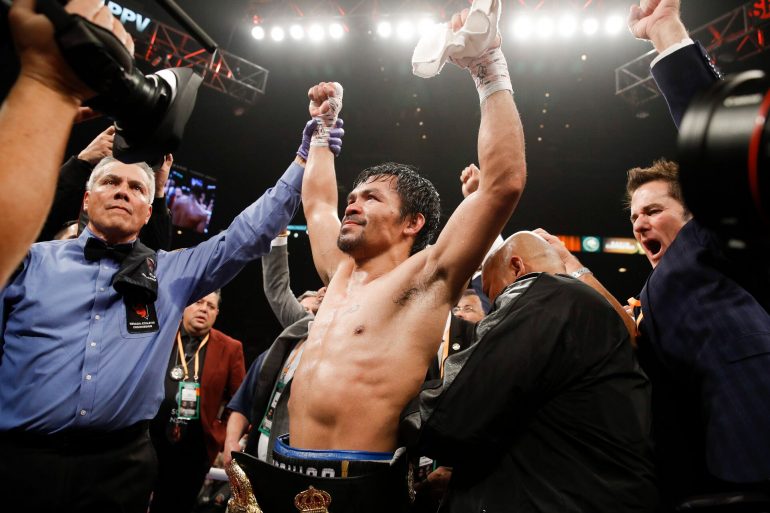 LAS VEGAS — When Manny Pacquiao dropped Keith Thurman – a man 10 years younger than him — in the first round and outpointed him in a masterful performance to win the WBA welterweight world title in July 2019 at the MGM Grand Garden Arena it was another significant piece of boxing history for the boxing legend.

Pacquiao, who held the WBA’s secondary 147-pound belt entering the fight, claimed the real deal from Thurman to become, at age 40, the oldest fighter in boxing history to win a welterweight world title. It was another major accomplishment for Pacquiao in a career filled with them, including having won world titles in a record eight weight classes and having held world titles in a record four decades (1990s, 2000s, 2010s, 2020s).

But the WBA, which has been a major source of irritation to boxing fans and media for years because of its insistence on handing out multiple titles in the same weight class, eventually stripped Pacquiao of the title in January due to inactivity, even though the world was mired in the coronavirus pandemic and many top fighters had been inactive.

Upon stripping Pacquiao – technically he was classified as a “champion in recess” – the WBA elevated secondary titleholder Yordenis Ugas by giving him the title Pacquiao won from Thurman.

Initially, Ugas was scheduled to defend that belt for the first time against Fabian Maidana in the co-feature with Pacquiao challenging IBF/WBC titleholder Errol Spence Jr. in the main event of a Premier Boxing Champions card on Saturday (Fox Sports PPV, 9 p.m. ET, $74.99) at T-Mobile Arena.

But when Spence was forced out 11 days before the fight because of a torn retina and Maidana was also ruled out due to a cut, Pacquiao and Ugas agreed to fight each other in the new main event. One of the byproducts of the match is that it will settle the issue of the WBA title, which both men have a claim to. 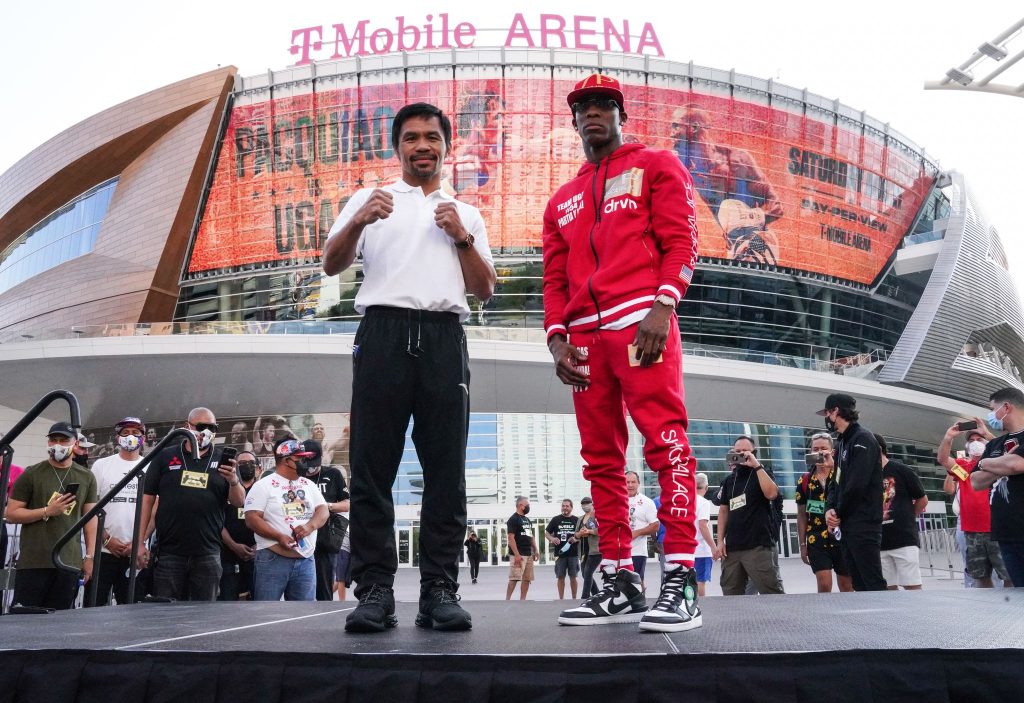 Pacquiao has won a slew of world titles during his historic 26-year career, but he would still like to have the championship he won in the ring from Thurman but was unceremoniously taken from him.

“(Ugas) got my belt without fighting me. It’s kind of embarrassing,” Pacquiao told a small group of reporters following Wednesday’s formal news conference, which was held inside the MGM Grand Garden Arena.

During the news conference, Pacquiao also addressed the unusual situation about the belt. He said he was “praying for a fast recovery” for Spence but that as long as he was unable to fight, Pacquiao was glad Ugas agreed to step in.

“I’m glad that we can settle that dispute about the WBA title. It’s always better to talk in the ring,” said Pacquiao, who took great pains not to take shots at the WBA for its actions when later asked about the sanctioning body. “Good thing here’s Ugas and he wants to challenge me in the ring for the WBA championship. It’s a good thing we can settle.

“I didn’t like that someone took my belt without challenging me in the ring. Both of us are champions, but we’ll see who has the belt after Saturday.” 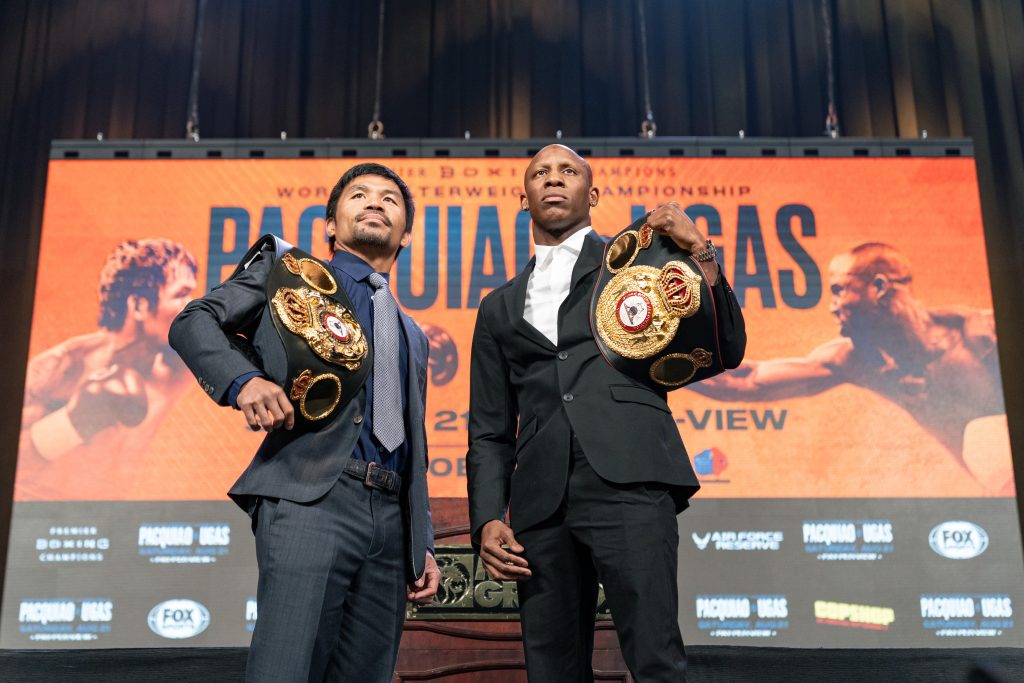 And on Tuesday, during the fighters’ grand arrivals, Pacquiao also offered his two cents on the belt situation.

“My title was given to Ugas,” Pacquiao said. “That is not how you become a champion. You earn it by winning it inside the ring. We will fight for the title. That is the proper way a champion is crowned. In the end, I want to win the belts. I’m so excited for this championship fight and I don’t care if I’m the challenger or champion coming into it.

“I am excited to win another world championship on Saturday. I don’t care who has the belt right now. We’ll see who walks out of the ring with it.”

Ugas (26-4, 12 KOs), 35, a former Cuban national team star fighting out of Miami, of course, was not responsible for elevating himself. The WBA caused that mess. What is important, Ugas said, is what goes down on Saturday night.

“I got elevated to being the WBA champion in January,” Ugas said through an interpreter. “But now we can say that whoever wins is the true WBA welterweight world champion.”

Should the Philippines’ Pacquiao (62-7-2, 39 KOs) win the fight, it would mean even more history for the fighting senator. He is 42 now and would break his own record as the oldest man to win a welterweight world title.

Asked about that possibility during the media session after the news conference, Pacquiao perked up and smiled. He seemed to sense the irony of having been stripped paving the way for another potential record.

“I like that. I’m happy for that, adding a record to my resume,” Pacquiao said. “Another accolade. I inspired people. I want to give inspiration to the people and putting another record in boxing history, that’s not easy. So, it’s an honor for me.”

PACQUIAO NOT WORRIED ABOUT SWITCHING FROM LEFTY SPENCE TO RIGHTY UGAS