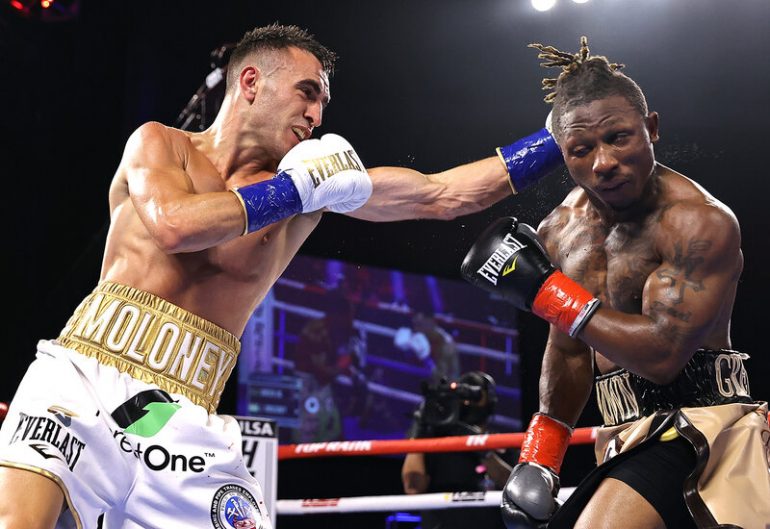 Australian bantamweight contender Jason Moloney got back to winning ways with a 10-round unanimous decision over Joshua Greer Jr. at the Hard Rock Hotel & Casino in Tulsa, Oklahoma on Saturday.

Moloney, who is rated 5 by The Ring at 118 pounds, was largely happy with his performance but feels he can still improve.

“It felt bloody good to be back in the ring after nearly 10 months,” Moloney (22-2, 18 knockouts) told The Ring. “Having watched the fight back, I thought I won clearly, but it wasn’t my best performance.

“I think if I had of put my foot on the gas in the middle rounds, I could have got the stoppage and made a real statement because I was having success outboxing Greer. I guess I just stuck to what was working.”

Moloney is grateful for the opportunity to get back in the win column after tasting defeat against Ring Magazine champion and IBF/WBA titleholder Naoya Inoue last October.

“It was great to get the win over a very solid opponent,” said Moloney. “There was a lot on the line and Greer certainly came to fight so hopefully everyone enjoyed the fight.”

The 30-year-old will now enjoy some time with his family, but he’s already thinking of the future.

“Hopefully this win will open up some big opportunities,” Moloney said. “I want to fight for the world title as soon as possible, so I would really love to fight either [WBC titlist Nonito] Donaire or [WBO beltholder John Riel] Casimero. But I guess I’ll have to see what my team can do and [see] how things play out.

“If those fights can’t be made, then I just want to stay busy and keep fighting. Another good test against a top-5 or top-10 rated fighter would be great. I’m willing to do whatever it takes to get a world title around my waist, so really, it’s anyone, anywhere, anytime. I’m always ready.”

Moloney’s manager, Tony Tolj, was happy with how things played out and is eager to match his fighter with the best in the division.

“There was a bit of ring rust early, but the longer he spent in the ring the more the class showed and he dominated Greer,” said Tolj.

“Next, I would like for him to fight another solid, top-5 rated boxer and keep active while we wait to get a shot at the world champion. We would love a fight with Donaire or Casimero.”