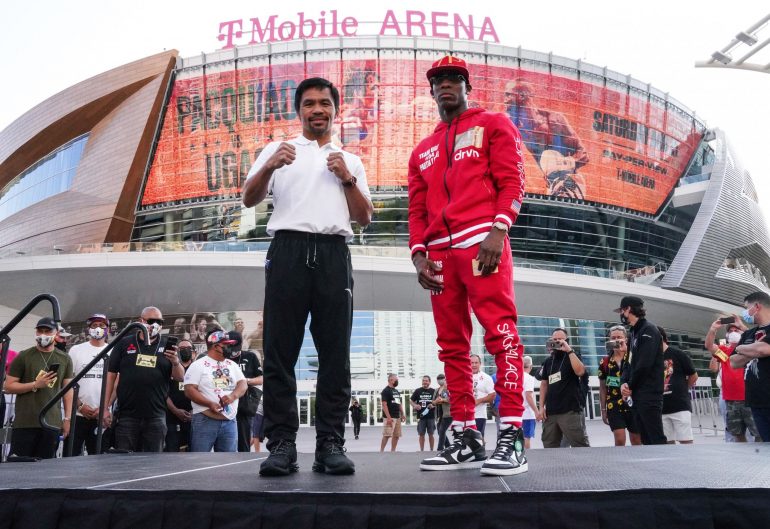 LAS VEGAS – When unified welterweight world titleholder Errol Spence Jr. was ruled out of his fight with Manny Pacquiao after being diagnosed with a torn retina during a pre-fight medical exam less than two weeks ago, Pacquiao had a choice to make.

He could cancel the event, waste months of training and not make a payday of more than $20 million or he could instead agree to face WBA welterweight titlist Yordenis Ugas, who was set to defend his title in the co-feature against Fabian Maidana until Maidana suffered a cut and was ruled out of their fight about the same time as Spence was given his diagnosis.

In the end, it wasn’t a tough decision. Pacquiao had been out of the ring since a stellar performance in a decision win over Keith Thurman in July 2019 to take the WBA title that was later stripped from him as Ugas was elevated from being a secondary titlist.

Pacquiao wanted to fight and so did Ugas, so the match was made on 11 days’ notice with the biggest challenge for Pacquiao being that he would have to switch from facing a left-hander in Spence to a right-hander in Ugas.

Although Pacquiao spent his training camp preparing for a southpaw, he has seen it all in a legendary 26-year career in which he has won world titles in a record eight weight classes.

He said there was no issue for him to switch to facing a right-hander on short notice, so it will be he and Ugas in the ring in the main event of a Premier Boxing Champions card on Saturday (Fox Sports PPV, 9 p.m. ET, $74.99) at T-Mobile Arena.

“I always consider myself a bipartisan boxer,” Pacquiao said in a nod to his other job as a politician and senator in the Philippines. “I am happy to fight either right-handed or southpaw fighters. It’s no problem for me at all to switch the styles that I’m going to face.

“I know that Ugas is also very prepared for his fight because he was going to be on the undercard. If there was no Ugas on the undercard, it’s possible we would have cancelled the fight. It’s a good thing we had another welterweight champion on the card for this scenario that happened. The only danger for this fight is the change in stance. Both Spence and Ugas are aggressive fighters, which I like. We can create a lot of great action in the ring that the fans will love.”

When Pacquiao had his first sparring session after learning of the change opponents, he said it did not take long to adjust to facing a right-handed sparring partner.

“For the first 30 seconds things looked a little odd in sparring, but I adjusted quickly, and it was business as usual,” Pacquiao said. “Naturally I am disappointed in the situation but thank God the tear in Errol’s retina was discovered before it could be damaged further.”

Ugas (26-4, 12 KOs), 35, a 2008 Cuban Olympic bronze medalist, who defected and fights out of Miami, is also making a change, going from training to face the right-handed Maidana to facing Pacquiao (62-7-2, 39 KOs), 42, who is not just a run-of-the-mill southpaw. He is perhaps the greatest southpaw in boxing history.

“It’s all about making adjustments at this point,” Ugas said through an interpreter. “I’ve had a lot of experience doing this before fights. It’s happened multiple times, so I’m truly prepared at all times to adjust to whatever comes my way.”

Like Pacquiao, Ugas did not hesitate to take on a new opponent, especially given that it was a chance to face an all-time great and see an increase in pay.

“When I got the call that I was going to face one of the best fighters in history, it just pushed my excitement to new highs,” Ugas said. “I can’t wait to show everyone what I’m capable of. I’m used to taking fights at the last minute. It’s really nothing new to me. Once I knew I was fighting Pacquiao, I got right back to work, because I’m always ready to fight anyone they put in front of me.

“Fighting Manny Pacquiao is very significant to me. It means the world to me. I’m not fighting for the money, I’m fighting for my legacy, and for my country. This is the most important fight of my life.”