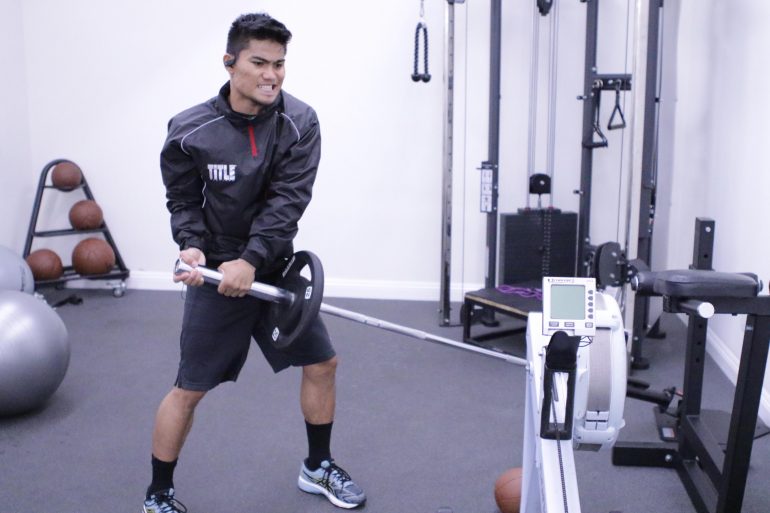 When Mark Magsayo first signed with MP Promotions, Sean Gibbons knew he had a work in progress on his hands. The vision he set out for the undefeated featherweight contender would be to give him two fights to acclimate to a new training program under Freddie Roach at the Wild Card Boxing Club in Los Angeles, and then put him in a title eliminator in his third fight.

The WBC eliminator is set for this Saturday when he faces two-time title challenger Julio Ceja on the pay-per-view card headlined by Manny Pacquiao vs. Yordenis Ugas at T-Mobile Arena in Las Vegas.

The transition hasn’t been seamless, with Magsayo struggling to a split decision victory over Rigoberto Hermosillo in his first fight with MP Promotions in October of 2020, before blowing away the overmatched Pablo Cruz in his last fight this past April. Gibbons says he can only tell whether he’s got the next featherweight champion on his hands after the final bell rings on Saturday.

“I watch him in the gym, Freddie is working with him and giving him pointers and he’s sparring with real guys and going at it. We won’t know it until he gets in the ring but I believe this is the fight to put him on the map,” said Gibbons.

Magsayo (22-0, 15 knockouts) of Dauis, Bohol, Philippines is in an enviable position in the featherweight division, with a top 5 ranking with three sanctioning bodies. His bout against Ceja (32-4-1, 28 KOs) should offer some answers. The 28-year-old from Tlalnepantla, Mexico has a number of notable wins, including knockouts over former titleholders Anselmo Moreno and Hugo Ruiz, but is winless in his last three bouts. His last fight was in November of 2019, when he came in more than four pounds overweight for a junior featherweight bout with Brandon Figueroa. The bout ended in a split decision draw.

“I’m excited to fight with him because he’s a brawler, he comes forward all the time. I need to win this fight to become a world champion,” said Magsayo.

“This is a good fight because he always moves forward. Maybe he’ll always eat my punches because he’s always going forward. Maybe there’s a knockout, but my goal is to go the twelve rounds.”

Magsayo says he feels more confident in his abilities under Roach and assistant trainer Marvin Somodio, who he says are diligent about correcting his mistakes in the gym. He’s gotten some lively sparring at Wild Card, including against junior lightweight prospect Gabriel Flores Jr.

Training under Roach means he has the added benefit of spending some time in the gym with Pacquiao. Magsayo says he has looked up to Pacquiao since he was eight years old. The two trade pleasantries about their training when they cross paths in the gym, though the media and VIP circus around Pacquiao usually means his attention is divided. Still, the experience has been a blessing for the 26-year-old Magsayo.

“When he trains I watch his moves, his style,” said Magsayo.

A win could put Magsayo in line for a shot at the WBC featherweight title, which is currently held by Gary Russell Jr., though former WBC junior featherweight titleholder Rey Vargas is the logical next in line since moving up in weight.

Magsayo knows that this high profile platform is where he needs to show he is ready for that next level, and to show that he is more than just a fun fighter to watch.

“This is when we find out if Mark Magsayo is a real fighter or he’s just a tough Filipino, OK kid,” said Gibbons. “He’s fighting a real, real guy.”