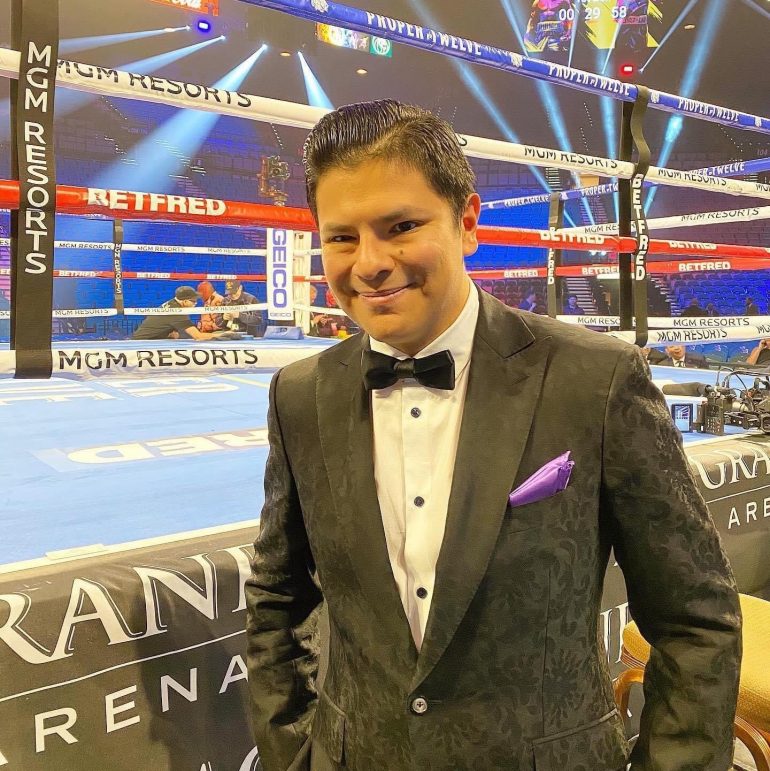 As he walked out still damp from swim practice, the brush of a chilly breeze forced Ray Flores Jr. to clench his shoulders and yank his jacket tight to his neck. Little did he know he was stepping into a seminal life-changing moment. His father, Ray Flores Sr., was waiting for him in the warm, humming car out front of East Chicago Central High School one winter day in 2002.

Ray Sr. was a Spanish teacher who wanted more for his three sons. He had a deep, baritone voice that could punch through walls. It commanded respect every time he spoke, especially to his boys.

Ray Sr. had a way of being direct without being confrontational.

So, when Ray Jr. tucked himself into the car for the 10-minute ride home that afternoon, he caught the brunt of it. Ray Sr. was transparent with his boys. Raising them, whatever was on his mind he said.

As they drove home, Ray Sr. darted a look at his oldest son over a brewing concern and asked, “Listen Ray, are you going to become an Olympic swimmer? I hear you talking about swim practice and stuff, but what about your education? What about your future? You really need to apply yourself to something you can hang on to move forward.”

Ray Jr. can look back at that epiphany as to why he’ll play a central role in the broadcast of the Manny Pacquiao-Yordenis Ugas fight for the WBA welterweight title on the FOX Sports PBC Pay-Per-View this Saturday (9PM ET/6PM PT) from the T-Mobile Arena, in Las Vegas, Nevada.

“My father saw a critical moment where the swimming and my social life was becoming more important than my education and he wanted to shake me up a little bit, and I’m glad he did,” admitted Ray Jr., who will be calling the media press conferences for PBC this weekend, as well as the FOX international broadcast of the fight. “If it wasn’t for that particular conversation, I would have swum all four years in high school. I don’t think I would be where I am now if that talk never took place.”

Ray Jr., who will turn 35 on August 30, would watch Julio Cesar Chavez fights with his father when he was a child, feet dangling from the edge of the living room sofa, mimicking what the fighters were doing on the screen. Ray Sr. would playfully chide him that he would only sit still for fights and Chicago Bears’ games.

Otherwise, Ray Jr. was constantly moving. He still is. He easily travels 40 of the 52 weeks a year.

Though he’s in his mid-30s, Ray still looks like he’s 16. He was actually that age when he walked into ECTV. Ray got an internship and worked an hour a week doing local community news and started a teen talk show.

When the internship was over, he was impressive enough to be among a handful of students that the local station asked to stay on and work after school. He would do an hour-and-a-half a day during the week when school got out at 2:30.

Soon after, the city of East Chicago, a hamlet in Northwest Indiana about a 31-minute drive from Chicago, bought ECTV, which allowed Ray to suggest broadcasting local high school basketball and football games. From there, Ray had a chance meeting with Miguel Torres, East Chicago’s only semblance of a sports star at the time.

Torres was a World Extreme Cagefighting champion, who eventually graduated on to the UFC, before MMA was nationally regulated. Ray started following Torres and asked if ECTV could start covering his fights. Ray Sr. would make the short trek to the Ramada Inn in Hammond, Indiana, where Ray Jr., then 17, would conduct fighter meetings and then call Torres’ fights from the Hammond Civic Center, a quaint 4,000-seat arena.

“I did so many events there that I grew up in that building as a commentator, and as a ring announcer,” recalled Ray. Jr. “Fight fans growing up in Philly had a legendary place like the Blue Horizon. I had the Hammond Civic Center. We were so low budget that I had to literally sit next to the camera, plug in my microphone in the upper deck of this 4,000-seat arena and called the fights next to the camera with my notes in my lap.

“I think that’s where things started for me. In 2005, I began a new boxing and MMA radio show, but I wondered how I would do it, considered boxing is such a visual sport. I got a lot of help from old Chicago Tribune boxing writer Michael Hirsley would come on. But there were some obstacles.

“From an MMA standpoint, I got a great start quickly from guys like Joe Goytia and Mike Davis gave me the chance when I was a sophomore at Columbia College Chicago (where he graduated with a BA in radio and television). Joe called me up to be the ring announcer for his fights that paid $200 a night. You’re a college kid, so $200 is a lot of money.

“In boxing, Bobby Hitz, the Chicago promoter, gave me my opportunity a year later, in 2008, 2009. But the real breakthrough in boxing came in December 2011. Joe Martinez, who works for Golden Boy, did a local MMA fight that I was working, and I did the first half of the night and Joe did the second half of the fight.

“I met Joe in the summer of 2011 and he took a liking to me. He called me out of the blue in November of 2011 and asked me if I could fill in for him in Indio, California, and I sent them a tape. I’m so blessed, because so many people are so great to me. From there, I started doing one show a month for Golden Boy since Joe was so busy.” 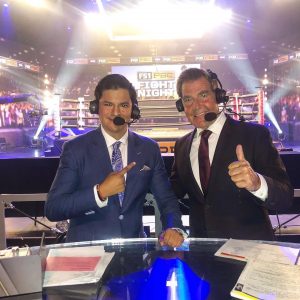 Ray began announcing one card a month for Golden Boy and doing Floyd Mayweather undercards on large shows, like Mayweather’s fight against Canelo Alvarez in September 2013. During the Mayweather-Marcos Maidana undercard in September 2014, Sandy Goossen-Brown, Joe’s sister and Tom Brown’s wife, heard Ray and told Tom about him. In December 2014, Ray announced ESPN’s “Night of Champions” when he ran into Brown, who runs TGB Promotions.

Brown asked Ray to do a Showtime ShoBox show the following week. In June 2015, Brown began bringing in Ray to host press conferences. Banner Promotions’ Artie Pelullo, Marc Abrams and Matt Rowland helped him take another step in April 2015 in getting the Lucas Matthysse-Ruslan Provodnikov announcing assignment on the HBO card.

Ray received some pushback from some major network people, but he had strong allies in PBC, Brown, Kelly Swanson and Sam Watson pushing his cause. Eventually, when given the chance, he proved himself to the doubters.

“Watching the prelim fights, there was Azumah Nelson fighting Gabriel Ruelas, and the trainer for the Ruelas brothers happened to be the legendary Joe Goossen, who I work with now on FS1. I was watching Joe corner Gabe Ruelas 30 years ago, when I was five. Talk about life coming full circle.” 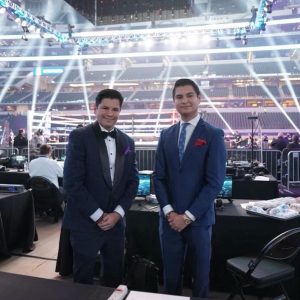 Ray made sure to create a good path for younger brother Miguel to follow.

Ray Jr. could be the most viewed boxing announcer in the world today. He’s also the only ring announcer who then broadcasts the same fights as the blow-by-blow man. He handles PBC events as the media host, handling press conferences and grand arrivals, is the Triller blow-by-blow announcer and is the international broadcaster for the PBC fights on Showtime and FOX.

Miguel Flores, 27, sounds just like his brother. And if not for Ray Jr., Miguel wouldn’t be where he is on the boxing broadcasting tree.

Their goal is to be like the Buffer brothers, Michael and Bruce, one day.

Miguel is heading in the same direction as Ray.

“I’m very proud of Ray and I wouldn’t be where I am without him,” Miguel says. “He has a great, distinctive voice, he’s passionate about sports and anything to do with sports and boxing. He was there with Miguel Torres, and Ray would even use his own dime to cover some of his events.

“Ray wasn’t handed anything. He started honing his skills at a young age. He did everything and loved it. A crucial part of his development and what you see now is the polished experience he got with ECTV and all of the things he did there. My dad really pushed that, and the voice definitely comes from our father. 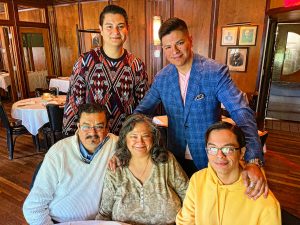 Miguel (standing left) and Ray have a special surprise for their parents, Ray Sr. and Sandra, seated with younger brother Alejandro, this weekend in Las Vegas for the Pacquiao-Ugas fight.

“If me, Ray and my dad were to all talk together, it would be tough to distinguish us. But if you were around us a lot, you could tell the difference. I remember Ray calling Bulls’ games standing in the living room watching games. I don’t remember my parents thinking Ray was nuts (laughs). They encouraged it. Teachers would tell my parents all of the time how special Ray was.”

This weekend is a big deal for Ray Jr. personally. It’s not big because it’s a Pacquiao fight or for the attention the fight brings. It’s big because for the first time, Ray Jr. and Miguel get to treat their parents, Ray Sr. and Sandra, to a big fight in Las Vegas.

“It’s something very special,” Miguel said. “Being in this industry, there’s a lot of running around and a lot of the work that goes into what we do. We’re on the road three and four weeks at a time, and it’s not a normal life, but sharing this with Ray and my parents will make this weekend special.

“Ray is the one that started it. He set the path. It’s one of those weekends that we’ll never forget—and I get to share it with my parents and my brothers. It’s what makes what I do so much better. I have a brother like Ray.”