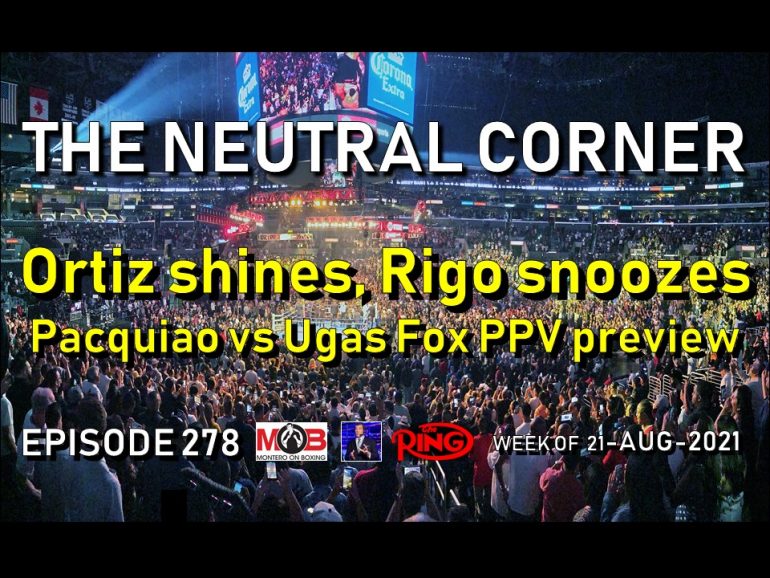 On episode 278 of The Neutral Corner boxing podcast, host Michael Montero caught up on the latest news in the fight world.

Errol Spence Jr. had to withdraw from his scheduled fight with Manny Pacquiao due to an eye injury. Cuban Yordenis Ugas, who was set to fight on the undercard, was bumped up to the main event and will now attempt to play spoiler. Perhaps Spence will fight the winner early next year after rehab.

In other news, the WBA has suspended judge Gloria Martinez Rizzo for six months after her dubious scorecard for the Mykal Fox vs Gabriel Maestre fight. WBA president Gilberto Mendoza will apparently meet with Rizzo soon to discuss further disciplinary action, including possible expulsion from the organization, following the discovery of racially insensitive tweets Rizzo posted in the past. A Fox-Maestre rematch may also be ordered.

There were four cards of note on Saturday, August 14.

In the U.K., Joshua Buatsi beat Richard Bolotniks by TKO in the 11th round. Bolotniks, of Latvia, gave Buatsi (15-0, 13 knockouts) his toughest challenge to date, taking him past the eighth round for the first time as a pro. The fight headlined a Matchroom Boxing card on DAZN.

In Frisco, Texas, undefeated welterweight contender Vergil Ortiz Jr. improved to 18-0 (18 KOs) with a TKO 8 win over Egidijus Kavaliauskas. Ortiz, who had never fought past the seventh round beforehand, dropped “Mean Machine” four times. At just 23 years old, the Dallas native appears to be the future of Golden Boy Promotions, who plans to bring him to the Los Angeles area for his next fight. This bout headlined a GBP card on DAZN.

In Carson, California, John Riel Casimero and Guillermo Rigondeaux stunk out the joint in a PBC on Showtime headliner. The defending WBO bantamweight titleholder struggled to get anything done against Rigondeaux, but the Cuban did little more than run throughout the entire fight. In the co-main, the bantamweight fight between Gary Antonio Russell and Emmanuel Rodriguez ended in a No Decision after a headbutt in the opening round caused a bad cut on the Puerto Rican’s face. In the TV opener, former 118-pound titleholder Rau’shee Warren scored a KO 2 win over Damien Vazquez.

“Part of me is shocked at Spence pulling out of the Pacquiao fight, but part of me is kind of relieved,” said Midwest Ceylon. “It’s been such a joy to watch Pacquiao fight all these years. I think Spence was going to give him a beatdown. So I’m relieved, but also disappointed, because I wanted to believe that the impossible could happen.”

“Rigondeaux’s performance may have been the worst I’ve ever seen from a world-class fighter in a main event,” said Nacho. “Especially for a title fight. The most annoying part was after the fight when Showtime interviewed him, Rigondeaux acted like he could care less about what the fans and media thought.”