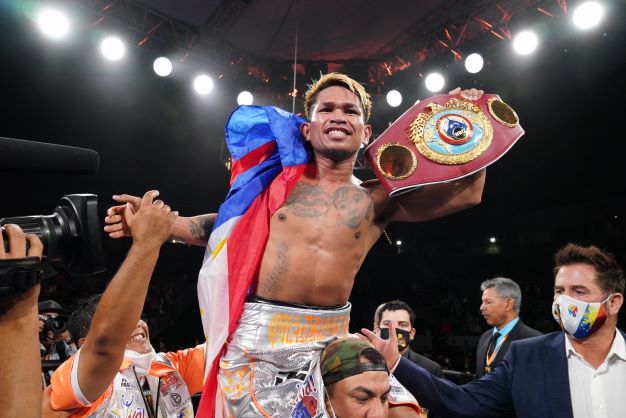 It was a dreadful fight to watch, with Rigondeaux running and Casimero chasing throughout the majority of the rounds.

Casimero (31-4, 21 knockouts) saw his six-fight knockout streak come to an end, but he became only the second fighter to defeat Rigondeaux as a pro.

“I want knockouts,” he said after the fight. “I did my best to knock him out, but Rigondeaux was always running. There was no fighting.”

Sean Gibbons, president of MP Promotions, added, “He’s very frustrated, it’s embarrassing. Casimero came in the best shape to come and put on a real fight. They should hold up that man’s purse.” 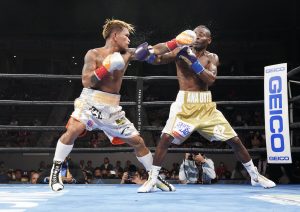 Rigondeaux (20-2, 13 KOs), who was credited with landing only 44 total punches, felt that he won the fight. “That’s my game plan, to frustrate boxers. That’s how I fight. God gave me those skills, and that’s how I display them. That’s my style.”

In the first round, Casimero landed a punch to the back of the head and put Rigondeaux down to a knee. The Filipino landed several more punches to the side of the head while Rigondeaux was down. Referee Jerry Cantu broke the action, ruled it a no knockdown, and gave Casimero a stern warning.

Unfortunately, that would be the only action of note. The boo birds were out by the end of the second round and kept up through the final bell. 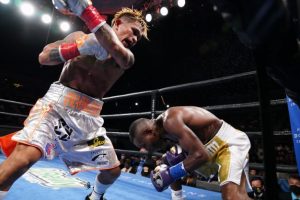 A pattern repeated round after round, with Rigondeaux on his bicycle and Casimero following him around the ring. Occasionally Casimero would reach with a punch and the Cuban would slip it, counter, and get back on the bike. It was a difficult fight to score. Rigondeaux appeared to land the cleaner punches, but Casimero was the aggressor. Fans eviscerated both fighters on Twitter, but especially Rigondeaux, throughout.

The difference seemed to come in the championship rounds, where it appeared that Casimero did the slightly better work. But a case could be made for either fighter winning, as well as a draw. Judge Tim Cheatham saw it 115-113 for the Cuban, but he was overruled by Daniel Sandoval and Robert Hoyle, who scored it for Casimero, 116-112 and 117-111.

The punch stats were close, as Casimero was credited with landing 47 of 297 total blows (16%), compared to 44 of 221 (20% for Rigondeaux. Casimero landed more power shots (41 to 28), with Rigondeaux landing more jabs (16 to 6). Neither fighter landed double digit punches in any round. The combined total of 91 landed punches is the lowest for a 12-round fight in CompuBox history.

Casimero said he would like to unify titles with Nonito Donaire next and then face Naoya Inoue after that. As for Rigondeaux, despite the fact that he will turn 41 years old next month, he says that he will fight on.

Rigondeaux and Casimero headlined a bantamweight triple-header on Showtime. The action was broadcast live from the Dignity Health Sports Park in Carson, California, about 15 miles south of Los Angeles.

The co-main event didn’t last a single minute. Just 16 seconds in, Gary Antonio Russell and Emmanuel Rodriguez clashed heads. Russell was throwing a lead hook from the southpaw stance and Rodriguez a left hook from the orthodox stance. The Puerto Rican got the worst of it, immediately falling to the canvas with a bad cut on the bridge of his nose, which appeared to be broken. The impact of the head butt could be heard outside the ring. Fans were looking forward to this WBA bantamweight title eliminator, but unfortunately both men had to settle for a No decision.

In the TV opener, former bantamweight titleholder Rau’shee Warren scored a second-round knockout win over Damien Vasquez. Warren (19-3, 5 KOs), a southpaw from Cincinnati, dropped Vasquez twice in the first round with right hooks. In the second, Warren slipped a jab and followed up with a beautiful left-hand counter. The shot buckled Vasquez’s knees and snapped his head around. Referee Ray Corona called off the fight, giving Warren the stoppage at 2:18 of the second round.

Vasquez (15-3-1, 8 KOs), who had fought competitively in recent bouts with Juan Carlos Payano and Brandon Figueroa, has now gone 1-3-1 in his last five. Warren, a three-time Olympian for the United States Boxing Team, is the No.1 rated contender in the WBA bantamweight rankings. Japan’s Naoya Inoue is the recognized WBA bantamweight champion.