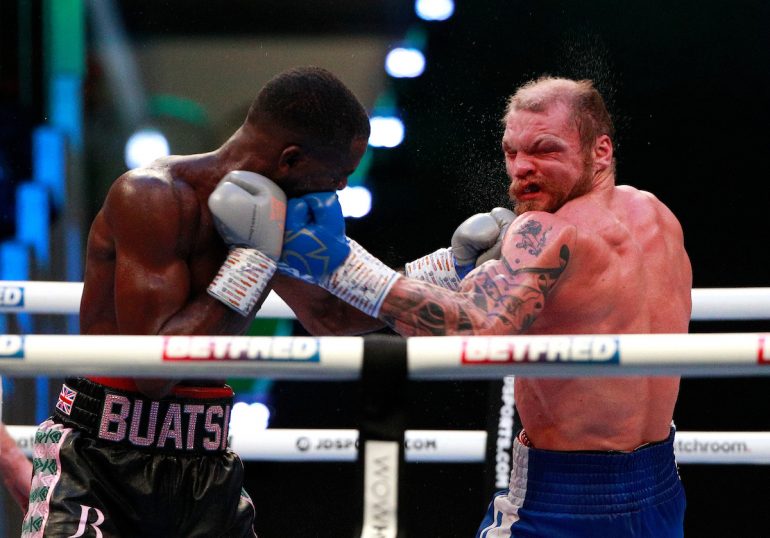 Joshua Buatsi was pushed hard by gusty Latvian Richard Bolotniks but found the answers and landed a big right hand in Round 11 to close the show and wind-up week three of Fight Camp.

“Big credit to him, he pushed me,” admitted Buatsi, who had his man down and almost out in Round 6 before punching himself out. “When I sat down, I said, ‘Buatsi, who told you to empty the tank?’”

Buatsi showed grit. While he was never in real jeopardy, he went into unchartered territories. He didn’t know he’d get a second wind. He didn’t pace the fight well. He wasn’t accurate enough or patient enough to close the show in Round 6. But he was good enough and he would have learned lessons.

Buatsi started quickly, reddening Bolotnicks’s nose with his jab but Bolotniks laned a right hand to keep Buatsi on his toes.

The Latvian, now 18-6-1, was second best to Buatsi’s impressive speed with the left hand in the second round and the former Rio Olympic silver medalist seemed to hurt the visitor to the body. Some early Buatsi work in Round 4 saw Bolotniks cut by the left eye although Joshua was warned by referee Howard Foster for landing low. Still, Buatsi – looking tremendously poised – hooked off the jab and landed with a decent right hand towards the end of the session.

He cruised through the fifth, well in control, and Virgil Hunter told him to look for the right uppercut before the sixth.

Within a minute, he had landed the shot and it was a clean punch. Somehow, moments later, Bolotniks survived a torrid round. Buatsi floored him with a wonderful left hook and while the Latvian made it back to his feet, Buatsi flew in behind both hands, landing plenty but missing too many in his eagerness to get rid of his man.

Buatsi gassed and needed to take the round off in the seventh to try and get his wind back.

Referee Howard Foster docked Buatsi a point for punching low in the eighth as the stubborn Bolotniks held his ground and kept punching back.

“Don’t give him hope,” said Hunter to Buatsi in between sessions, sensing Bolotniks was growing in confidence.
Towards the end of the ninth, though, Buatsi seemed to get a second wind and he began to pummel Bolotniks in the 10th, breaking him down with crisp jabs and body shots.

Buatsi was slower in the 11th but he was measured and clearly in the ascendency and then, with Bolotnicks’s back to the ropes, Buatsi landed a right to the body, thundered home an overhand right and the Latvian went down and out.

It had been a hard fight, a real test for Buatsi who, while he wasn’t troubled hugely by the man in the opposite corner, will have learned more about pacing fights, fight management and will now have the knowledge that he carries his power late.

Bolotniks was given oxygen in the ring afterwards but soon made it back to his feet okay.

Foster’s intervention came after 2:08 of Round 11.

Eddie Hearn called it “an unbelievable performance”. “That fight was perfect in so many ways,” said Hearn, who thought Buatsi would be out next in America, possibly in November and December. “You can’t go from knocking out people for fun to going in with the likes of Beterbiev, Bivol and Smith.”

Cordina started landing right hands early and caught Hernandez with several crisp shots before piling through a heavy right hand behind a jab and that was that.

Leeds prospect Hopey Price is now 5-0 with just one stoppage win but he nearly made it two stoppages when he dropped Claudio Grande with a superb southpaw left hand with the last punch of the fight. Grande made it back to his feet to hear out the count and made it to the scorecards, just, losing 58-55.