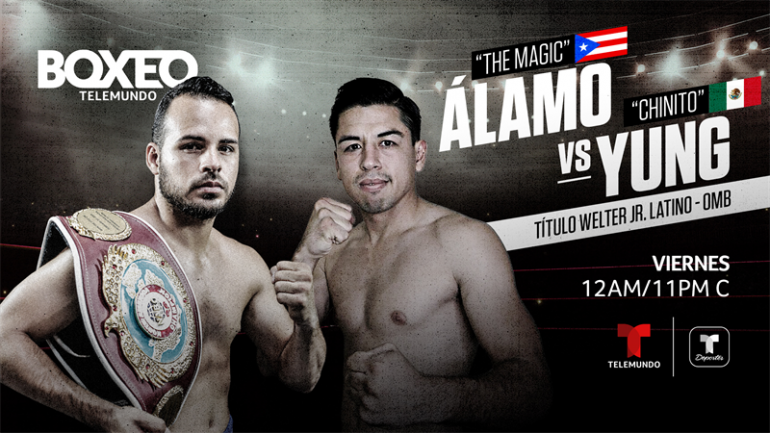 The victory over Yung was Alamo’s third consecutive win since fighting to a draw against fringe contender Antonio Moran in October 2019. In his previous fight on March 5, the 26-year-old defeated Mexico’s Jesus Beltran by unanimous decision.

Alamo scored the only knockdown of the fight near the end of the opening round, dropping Yung with a stiff jab to the head. Yung was not visibly hurt as it looked like he also lost his balance at the time Alamo landed the punch.

Yung was the aggressor through the first five rounds, backing Alamo up against the ropes. Alamo would use Yung’s momentum against him, utilizing head and lateral movement to make Yung miss badly, countering with two or three-punch combinations.

As the bout progressed, Yung’s aggression and punch output dropped significantly. By Round 8, Yung looked worse for wear, throwing one punch at a time. Seemingly exhausted, Yung mostly threw arm punches, missing badly at times as Alamo outboxed him in the center of the ring.

Prior to the fight against Yung, Tuto Zabala Jr., Alamo’s promoter, was hopeful that a fight against a top contender on a bigger stage was possible for later this year. Alamo believes he is currently the top junior welterweight.

“There was no need to look for a knockout,” said Alamo, who is trained by former 105-pound titleholder Ivan Calderon. “I’ve demonstrated that I’m an excellent boxer. I didn’t see the point in looking for a knockout when I was controlling the fight.

In preliminary action, junior lightweight prospect Otar Eranosyan dropped Juan Carlos Peña once in Round 2 and once again in Round 4 to win by knockout.

Eranosyan, who is originally from the country of Georgia and now resides in Miami, Florida, improves to 9-0, 6 KOs. The victory over Peña on Friday night was a rematch from their January 30 clash, which Eranosyan also won by knockout in Round 4.

Peña, who is originally from the Dominican Republic, drops to 32-4, 23 KOs.

The All Star Boxing card was the first telecast of the “Boxeo Telemundo” summer series.