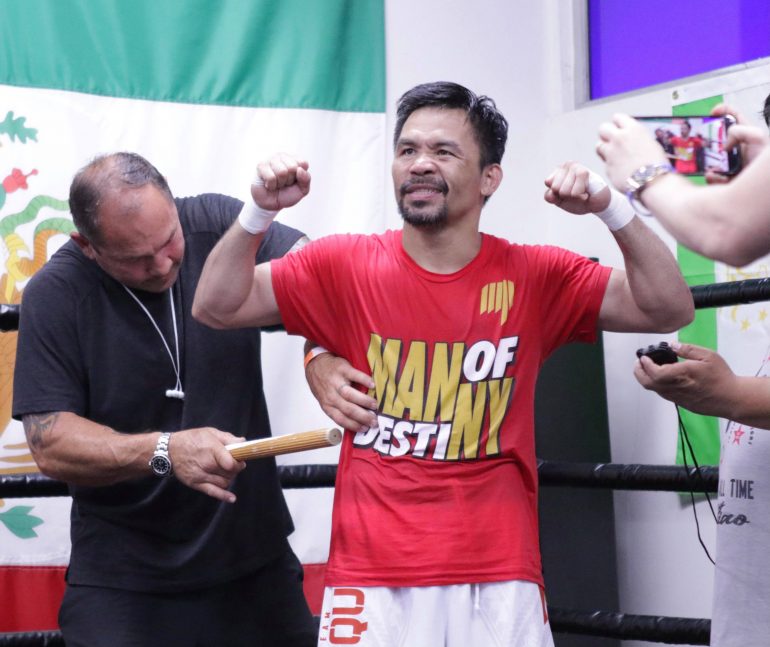 Taking a fight on short notice is one thing, but agreeing to a high-stakes championship bout against a fighter with a different boxing stance and with little or no time to change the narrative of the entire multimillion-dollar promotion seems to be an even riskier proposition.

But the protagonists of this fight are no strangers to taking life-changing risks, and that trait alone appears to be the main reason why 42-year-old Manny Pacquiao (67-7-2, 39 knockouts) will take an equal or even greater risk than the one he was willing to take when he signed up to fight Errol Spence Jr. on August 21, but this time against Cuba’s Yordenis Ugas instead.

In a plot full of twists and turns worthy of a Dumas novel, an injury suffered by Spence (torn retina) opened the way for the multi-titlist Filipino senator to face a fighter who was already scheduled to defend a belt that once belonged to him (and which he still feels was taken unjustly from his hands) on the very same card headlined by Pacquiao-Spence.

Cuba’s Ugas had been a ‘regular’ champion in the WBA’s wretched ranking-within-a-ranking of multiple title belts since he defeated Abel Ramos back in September of 2020 with the vacant version of that title on the line.

He was, however, promoted to ‘super’ champion (the title won by Pacquiao in his epic, age-defying win over Keith Thurman back in July, 2019) last January due to Pacquaio’s inactivity.

Ugas (26-4, 12 KOs) was getting ready to face Argentina’s Fabian Maidana in the co-feature bout that will still take place in Las Vegas’s T-Mobile Arena and broadcasted live on Fox Sports PBC Pay-Per-View. But in yet another bizarre twist, Ugas didn’t even have to cancel that fight to get to Pacquiao, since Maidana (brother of former welterweight titlist Marcos) suffered an eye injury of his own (a cut under his left eye) that forced him out of his fight as well.

The dispute to determine the ownership of the ‘super’ WBA title will then be settled once and for… a few days or months, at least (or for as long as it takes for the WBA to find another excuse to hand over a version of that belt to another fighter). Spence’s absence, however, takes one belt off the table: the fabled Ring magazine championship will remain vacant now that the fight does not involve two of the top three fighters ranked by the magazine in the 147-pound division.

The stage is set, and now they are both ready to validate their claims in the most undisputable manner: a 12-round championship fight for all the marbles. Or at least until the WBA manages to manufacture a different set of marbles to peddle elsewhere.

This is what both fighters shared with the press in a conference call today.

“First of all, I like to say I pray for (Errol Spence’s) fast recovery. I think I did my best in training for this fight and worked hard in the gym. I am happy that my hard work is not wasted. (It’s a) good thing that I can show my hard work and what I did in training,” said Pacquiao, in his opening statement. “I am not disappointed at all, because my hard work was not lost and because Ugas was there and ready to fight. But the most important thing is (Spence’s) health.”

As a representative in the Philippines’ congress since 2010 and senator since 2016, Pacquiao has juggled with both careers since then. Seeing a few words from his day job seeping into his pugilistic discourse, then, is totally understandable.

“I consider myself a bipartisan boxer,” said Pacquiao, likely meaning to say ‘ambidextrous.’ “I am used to fighting right and left-handed so it’s not going to be a problem,” said the left-handed fighter, who was planning on facing a fellow southpaw in Spence, but will now have to face a right-handed foe instead. “The only adjustment I will make is (the stance). It’s the only thing, because Spence is aggressive, and Ugas is aggressive also. We can create more action in the ring and the fans will love it.”

Regardless of the angle from which he will be receiving punches, Pacquiao still feels that the excitement will be guaranteed.

“What I want to say to the fans is that is not an easy fight. Ugas is a real champion and we have to settle this inside the ring. I never took this fight lightly. Spence and Ugas have similar styles, they may be left or right-handed but their general styles are the same.”

The motivation for both men, however, couldn’t be more different. While Pacquiao has already left an indelible mark in his country’s political life, Ugas’ legacy in that respect is still in progress, as he mentions below. Pacquiao, then, finds strength in a different realm.

“The motivation is my family expecting me to win the fights and the support and enjoyment of the fans who will be in the arena,” said Pacquiao, when asked about how the controversy with the WBA titles will play out in his mind in terms of inspiration. “The thing I want them to remember is that Pacquiao is a good guy, not only inside the ring but also outside the ring. And not only in boxing.”

When the issue of his legacy came up, coupled with the minor humiliation that he will now be entering the ring as the challenger for a belt that rightfully belonged to him before being just handed out to Ugas, Pacquiao saw no relevance in the unusual situation.

“I think this fight is good, and I am excited for this championship fight. I don’t care if I am the champion or he is the champion. Let’s finish this fight and we’ll see who is the titleholder,” said Pacquiao, who aside from breaking an almost two-year hiatus with this bout will also be in position to break his own record as the oldest man to win a welterweight belt at 42 years of age.

“It is good that I break my own record. I like that! Making history!” he laughed, when confronted with this new potential accolade in a career that has seen many. “If Ugas had not been in the undercard the fight would have been cancelled, but it is a good thing that Ugas is in the same card and in the same weight. It’s been a while and I can’t wait.”

Ugas: “I am not taking this fight for money, I do it for my legacy”

Knowing that he owns his opportunity to a colleague’s misfortune, Ugas started his intervention by indicating that “I want to wish Spence a speedy recovery and that he may return 100% healthy. I am very emotional because I am fighting against one of the best fighters in history, and looking forward to face one of the fighters I admired all my life.”

Ugas went on to describe the timeline of his sudden transformation into a main event fighter in a PPV event against an all-time great, a vertiginous set of events that transpired in only a matter of hours.

“When they told me Spence was injured, they told me Maidana was also injured. But I was training to fight on the 21st, anyway. On Monday they told me that this could happen, and on Tuesday they made the announcement. It was all very fast, to tell you the truth. But I am a fighter and I am ready to do this at any time. But I have fought with one week’s notice, or even one day. I fought with both right and left-handed fighters, and I am moving ahead with only a few minor adjustments.”

Even so, Ugas himself would undoubtedly agree that Pacquiao is not just another southpaw. A victory against him would place the Santiago de Cuba native in a category of his own, and he claims to find all the motivation he needs in that fact.

“Facing Pacquiao means a lot for my legacy,” said Ugas. “I am not taking this fight for money, I do it for my legacy. Many people would love to have this chance, and I have it. It is the biggest opportunity of my life.”

Ugas’ career was put on hold for two years between 2014 and 2016, but he claims he returned even stronger than before, and that the claims that his title is somewhat tainted by the WBA’s handling of the situation only motivates him further.

“I should have been a champion against (Shawn) Porter,” he claims, mentioning the March 2019 fight with the WBC title at stake in which he was defeated by a disputed split decision. “In 2014, I had two defeats and I went home. I had a son; I did other things. I never thought I would fight against Pacquiao, and defending a championship to boot. But I feel I’ve been one of the most active fighters in the last few years. I am a champion, and I feel like a champion. Pacquiao is a great fighter and the favorite, but I am ready to spoil the night for him.”

Ugas’ strongest statement, however, came when the issue of motivation came into the discussion. Borrowing a page from Pacquiao’s own passion for the tribulations of his people, Ugas stepped onto the soap box to deliver a heartfelt diatribe about his native country’s current situation, and the way in which he finds inspiration in it to continue fighting.

“Everyone knows that I fight for the rights of my country, I fight against the dictatorship. Everyone knows that I raise my voice all the time for this. This fight is an incredible platform for me to promote the idea of ‘Homeland and Life’ for all Cubans,” he said, echoing the new political chant of his people in the streets during the current revolt, in open defiance of the decades’ old rallying cry of the Communist revolution, ‘Homeland or Death’.

“I am preparing for the best Pacquiao, a fighter who has always been in the best shape. It is a mistake to underestimate him. I am ready for the best possible Manny ever. I am a fighter who comes to fight, to leave everything in the ring. I started boxing at 6-years old and this is the greatest night of my life. And I am not going to disappoint my fans. This fight is dedicated to all the men and women who are fighting for change in my country, fighting for freedom. I will fight my heart out to dedicate this victory to the Cuban people.”