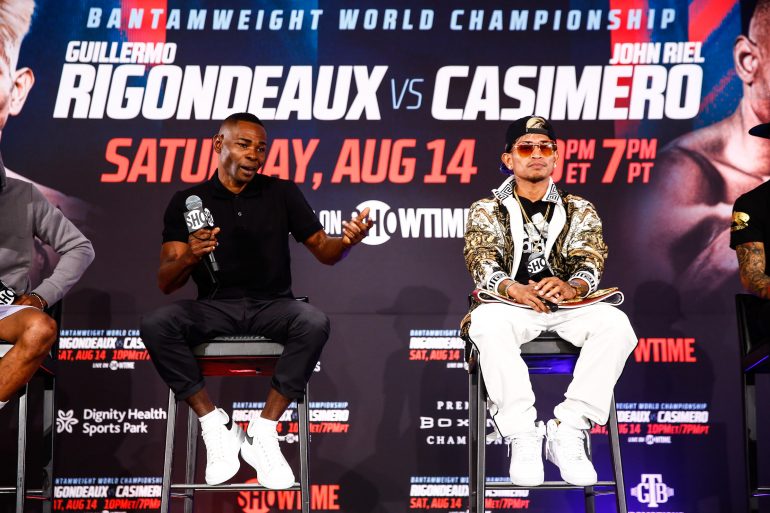 Casimero, who is rated No. 2 by The Ring at 118 pounds, lost his first world title attempt to then-IBF flyweight beltholder Moruti Mthalane (L TKO 5) but rebounded strongly to win world titles at 108 and 112. The globetrotting Filipino power-puncher then moved up to junior bantamweight but fell short against compatriot Jonas Sultan (UD 12). Following a period of reflection, Casimero moved on to bantamweight and, as underdog, stopped Zolani Tete (TKO 3) to win the WBO 118-pound title. He has made one successful defense.

Rigondeaux, who is rated No. 8, is a two-time Olympic gold medalist and one of the most decorated amateurs of all time. He won the WBA 122-pound title and unified with Nonito Donaire (UD 12) to add the WBO belt to his collection. The super-slick lefty then spent years in the boxing wilderness, fighting sparingly, and was eventually stopped in six rounds by then-junior lightweight titleholder Vasiliy Lomachenko in December 2017. He’s only had three fights since and won them all.

It’s an intriguing clash of styles; the attack minded champion versus the defensive wizardry of the challenger. What does Rigondeaux (20-1, 13 knockouts) have left at almost 41 years old? Can Casimero (30-4, 21 KOs) drag Rigondeaux into a firefight or will the Cuban maestro slow the pace and pick Casimero off? 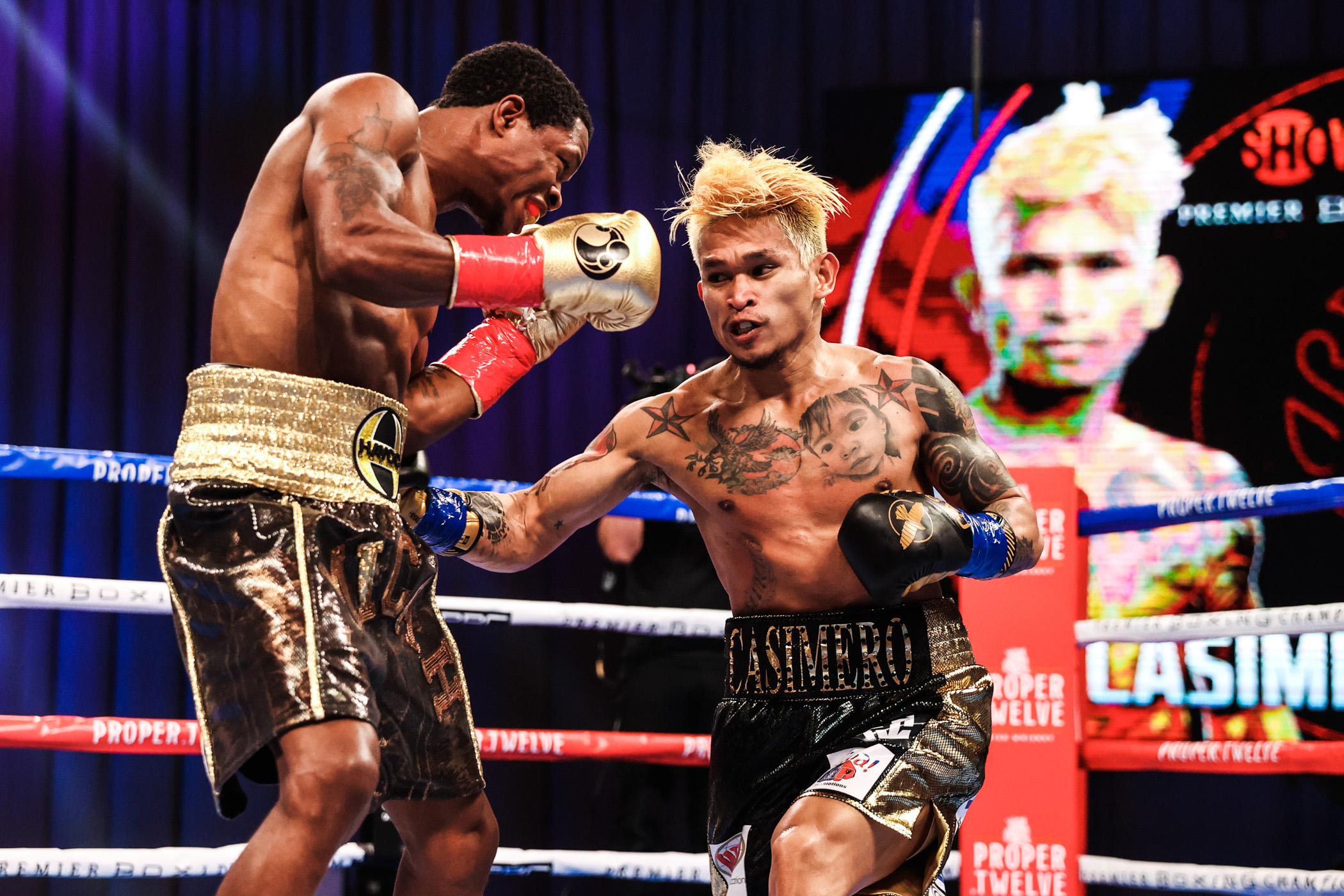 TOM GRAY: CASIMERO TKO
“I think the timing is perfect for Casimero. As great as Rigondeaux was, his age and inactivity are due to catch up with him. Casimero is powerful and difficult to time, assets that will trouble a part-time professional regardless of his prior credentials. I foresee a come from behind stoppage.”

ANSON WAINWRIGHT: CASIMERO TKO 10
“Casimero fights at 100 mph, while Rigondeaux is a past master of picking his shots and making fighters pay. It’s one of those fighters where any outcome is possible. Casimero figures to come out fast and bring the fight. Rigondeaux will be much more economical and pick his shots. The pace of the action is something that will trouble Rigondeaux and ultimately be his downfall. I like Casimero to get the stoppage in the final quarter of the fight. However, I definitely wouldn’t be surprised if Rigondeaux ran Casimero into a shot and got the win.”

LEE GROVES: RIGONDEAUX UD
“While it is true that Casimero is younger, more aggressive, a big hitter and has been more active, Rigondeaux showed in his most recent fight against Liborio Solis that he is still a formidable technician capable of shutting down opponents when he decides to do so. Also, because he’ll have a three-inch height advantage and a three-and-a-half-inch wingspan edge, he’ll have the power to dictate terms and potentially lull the Filipino into the sleepy boxing match he prefers. As long as he doesn’t foolishly trade with Casimero as he did with Solis and Ceja — and as long as he lands hard enough and often enough to win rounds while in shutdown mode — his technical prowess and otherworldly knowledge should prove sufficient to dethrone Casimero.”

MARTY MULCAHEY: RIGONDEAUX TKO 10
“Guillermo Rigondeaux, like Bernard Hopkins or Donnie Nietes, does not have some genetic advantages that prevents him from aging like normal humans…. he is just a fantastic boxer who knows all the tricks. It takes a special talent to unseat someone like Rigo, and I do not think John Riel Casimero is in that category. I look for Rigo to stay patient initially, boxing from a distance and frustrating Casimero into more and more lunging punches. By the fifth round Rigo will have seen all he needs to see and he’ll cut the distance and start landing harder shots. By the 10th, the referee will have either seen enough or Rigo will have stopped the brave but outclassed Casimero with a two-knockdown round.”

MICHAEL MONTERO: CASIMERO UD
“The last time we saw Rigondeaux, he sleepwalked through most of his bout with Liborio Solis. Meanwhile Casimero is riding a six-fight KO streak. If this fight were signed a few years ago, I’d favor the Cuban, but I believe youth will be served on August 14. Gimme John Riel Casimero by unanimous decision.”

NORM FRAUENHEIM: CASIMERO UD
“Guillermo Rigondeaux’s nickname is “El Chacal” (The Jackal). But it might as well be ‘The Enigma.’ It’s hard to know exactly who Rigondeaux is. It’s even harder to pick against him. His astonishing record goes all the way back to the 2000 Sydney Olympics. He won gold then. He won gold again in 2004. If he had stayed in Cuba, he could have gone on to win in Tokyo, making him a six-time gold medalist. As an amateur, he was that good. But as a pro, he’s been hard to define. Now 40, he can still beat the younger Casimero. It depends on which Rigondeaux shows up. Dull or Dynamic? But either version will run into Casimero’s power, which figures to punish early and exhaust later in a convincing victory for the Filipino on all three cards.” 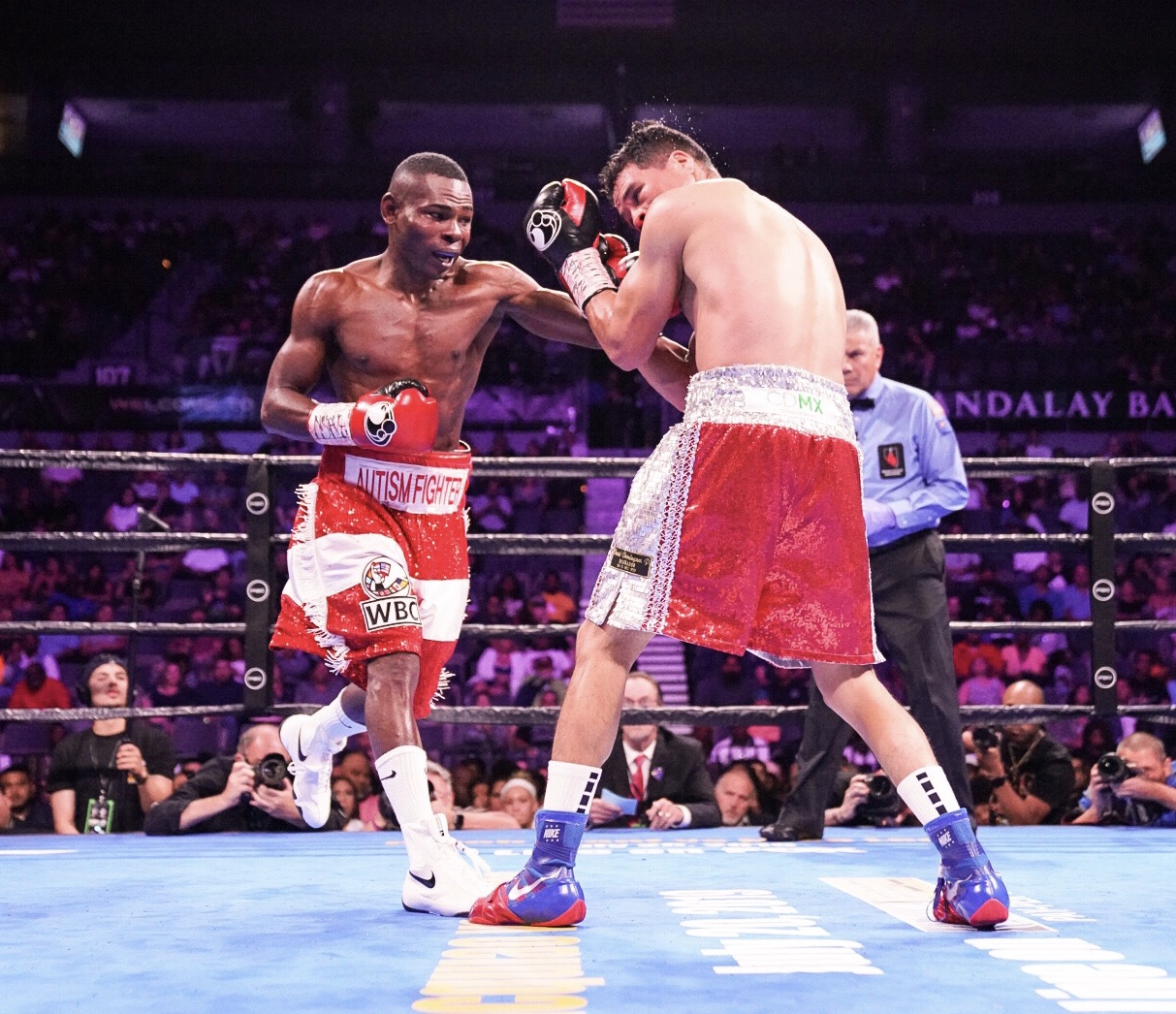 DUKE MCKENZIE (FORMER THREE-DIVISION TITLEHOLDER/TV ANALYST): CASIMERO TKO
“This fight should be called, “Right Time, Right Place.” Surely Casimero is too fresh and ambitious to lose this fight. Rigondeaux was an excellent champion in his day and a fine ambassador for boxing. I can see a controversial stoppage at mid-way point in Casimero’s favor.”

RAUL MARQUEZ (FORMER WORLD CHAMPION/COMMENTATOR): CASIMERO TKO
“Rigondeaux needs to box and use his veteran experience. Casimero is very strong and creative with his combinations. He’s very patient but once he finds the right distance, he will catch Rigondeaux between six to eight rounds.”

MARC RAMSAY (TRAINER): CASIMERO TKO 9
“In the last few years, John Riel Casimero has proven to be a boxer of quality, which should give us a good fight. But the real question is what has Rigondeaux left in the tank? He is now over 40 years old and is no longer active. His last performance was not convincing. I believe that the longer the fight goes the more difficult it will be for veteran Rigondeaux. I’m anticipating a late stoppage.”

WAYNE MCCULLOUGH (TRAINER): CASIMERO KO 7
“This is a fight with the better technician, Rigondeaux, versus the explosive hard-puncher, Casimero. Casimero will probably have the advantage as the younger man but will have to be in top shape to get the win. Rigondeaux is skillful and will have to be sharp to keep Casimero off but that could be tough as Casimero fights coming forward. Both guys can hit hard and it may well be the fighter who gets the first hard shot in that wins. Casimero will keep pushing for the knockout and might get it in the middle rounds unless Rigondeaux can keep him off with his skills. I think Casimero wins by KO in seven.”

TONY TOLJ (MANAGER): CASIMERO UD
“Casimero is a dangerous puncher, but Rigo is a crafty and incredible talent who is very precise. I think with [Rigo’s] time on the sidelines and Casimero’s youth, l have to go with the younger lion in this contest. Casimero by unanimous decision for me.”

JASON MOLONEY (BANTAMWEIGHT CONTENDER): CASIMERO KO 6
“It’s an interesting fight which could really go two ways. Rigondeaux could put on a boxing master class and win a very wide points decision or Casimero will win by KO. In Rigondeaux’s past couple of fights he seems to be getting hit and hurt more often. Perhaps his reflexes and chin aren’t as good as they used to be. For that reason, I’ll pick Casimero by KO 6.”

ANDREW MOLONEY (JUNIOR BANTAMWEIGHT CONTENDER): CASIMERO TKO
“This is a hard fight to pick, mainly because it depends what Rigondeaux shows up. I believe the Rigondeaux of a few years ago wins this fight comfortably, but due to his age and inactivity I believe Casimero will win this fight. Casimero by mid-late stoppage.”

RUDY HERNANDEZ (TRAINER): RIGONDEAUX PTS
“That’s a hard fight to predict… both counterpunchers, both with power. I think the fight will be slow and that will benefit Rigondeaux. I don’t see it being exciting but a knockout either way would be spectacular and that will make it worth watching. Rigondeaux’s experienced and if he’s got anything left, he will pull off of a close decision.”

SAMPSON LEWCOWICZ (PROMOTER, SAMPSON BOXING): CASIMERO KO
“Casimero by KO in the later rounds. The age and inactivity of Rigondeaux will be his enemy in this fight and he will pay the price.”

ALEX STEEDMAN (COMMENTATOR): CASIMERO TKO
“It’s probably fair to say that a prime Rigo would be more concerned where the next cookie was coming from rather than the rudimentary challenge presented by Casimero. But it’s easier guessing Rigo’s real age than it is establishing how much of the old talent persists. Recent wins suggest that he probably has enough to win this, but Casimero is on fire right now and brings the heat every time. If John Riel Casimero could get to Tete then he might be able to hassle Rigo too. Unthinkable until recently, I take Casimero to stop an ageing Rigo down the stretch.”

ZOLANI TETE (BANTAMWEIGHT): RIGONDEAUX TKO
“I would put my money on Rigo for his experience, his power and boxing I.Q. This fight won’t go the distance because Casimero’s stamina is questionable.”

JOHN SCULLY (TRAINER): RIGONDEAUX UD
“I can’t say I know how much Rigo has left but he seems to be working hard. As good as Casimero is, I believe if Rigo is as sharp as he once was, he is going to win a unanimous decision and look younger than his years.”

VICTOR SILVA (TV ANALYST): CASIMERO KO 9
“The fight will be in the legs of Rigondeaux. If he can move for 12 rounds he might win, but, for me, Casimero will win by KO 9.”