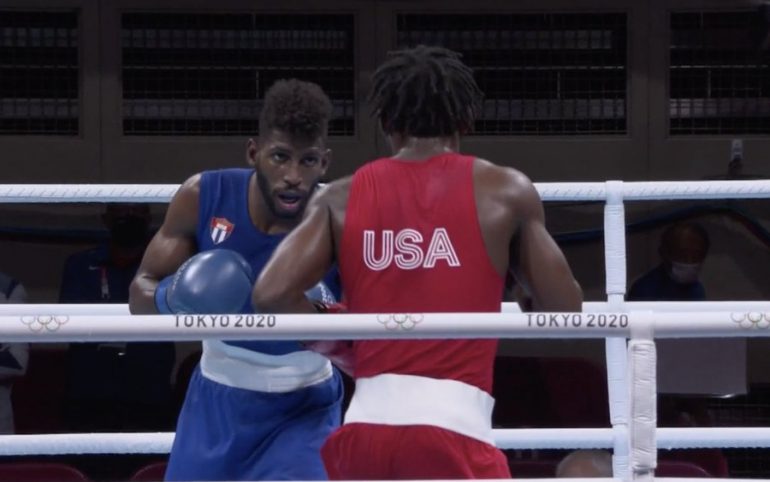 Andy Cruz of Cuba made it 4-0 against Keyshawn Davis in their amateur meetings, winning a 4-1 split decision over the American to take home the men’s lightweight gold at the Tokyo Olympics.

“I’m very happy because I could reach my goal. It was my goal to reach gold and I accomplished that,” said Cruz, 25, of Matanzas, Cuba.

Cruz, the two-time light welterweight World Champion, won the first round on 4 of the 5 cards with his speed and counterpunching, but the 22-year-old Davis, who has a 3-0 (2 knockouts) pro record, showed his toughness in the second, stunning Cruz with a counter right that had him buckled momentarily, to sweep the round on all 5 cards.

The bout came down to the final round, and once again, Cruz, who beat Davis three times in 2019, showed why he was a wide favorite to win, beating Davis to the punch time and again with the right hand, sweeping it on all five cards.

Cruz celebrated the victory by doing a Michael Jackson dance at center ring, while the Matchroom Boxing-promoted Davis of Norfolk, Va. hinted at future success in the professional ranks.

“I’m a champion whether I get the gold medal or not,” said Davis.

“Everything was worth it, man. Even though it’s a silver medal, I still learned a lot about myself in this tournament, leading up to the silver medal. I think I’m a better fighter now.”

The loss continues the United States’ men’s boxing gold drought that stretches back to 2004, when Andre Ward won the light heavyweight gold.

In the day’s opening bout, Kellie Anne Harrington earned Ireland its only boxing gold medal of the Tokyo Games, defeating Brazil’s Beatriz Ferreira by a 5-0 unanimous decision in the women’s lightweight final.

Two judges scored the bout a 30-27 shutout for Harrington, while the other three had it 29-28.

She currently works as a part-time cleaner at St. Vincent’s Hospital in Dublin, and plans to return to return to work after the Olympics.