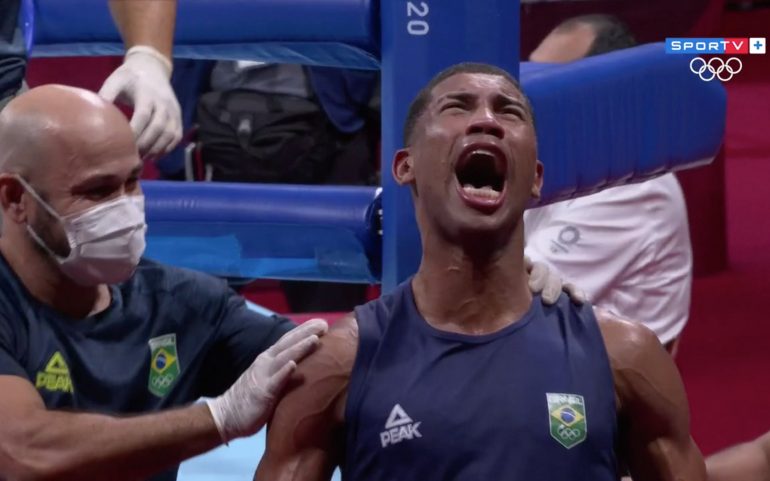 Ahead 20-18 on all five scorecards heading into the final round, all Oleksandr Khyzniak needed to do was play it safe for three minutes. Instead, the Ukrainian fought like a warrior, and it cost him the gold.

Brazil’s Hebert Sousa put the granite-chinned Khyzniak down on the mat with a perfectly timed left hook, leading to a referee’s stoppage at the 1:29 mark of the final round on Saturday, August 7.

Ukrainian wrecking ball Oleksandr Khyzhniak was well on his way to Olympic gold against Hebert Sousa, only for the Brazilian to produce a stunning left hook which sent Khyzhniak tumbling to the canvas. One of the great upsets – and comebacks – in amateur boxing history. pic.twitter.com/d6JhsrujYy

Khyzniak, an all-out brawler who was seemingly impervious to his opponents’ punches, had survived back to back street fights with Euri Cedeño of the Dominican Republic and Eumir Marcial of the Philippines on split decisions, but appeared even more dominant in this fight prior to the knockout.

In the opening bout of the day, Great Britain’s Galal Yafai outpointed Carlo Paalam of the Philippines to win the men’s flyweight gold.

There are four more gold medal matches planned for Sunday, with Keyshawn Davis and Richard Torrez Jr. seeking revenge for past defeats against Cuba’s Andy Cruz in the lightweight final and Bakhodir Jalolov in the super heavyweight final, respectively. Also, Beatrize Ferreira of Brazil faces Ireland’s Kellie Anne Harrington in the women’s lightweight final, and Lauren Price of Great Britain faces Li Qian of China in the women’s middleweight final.