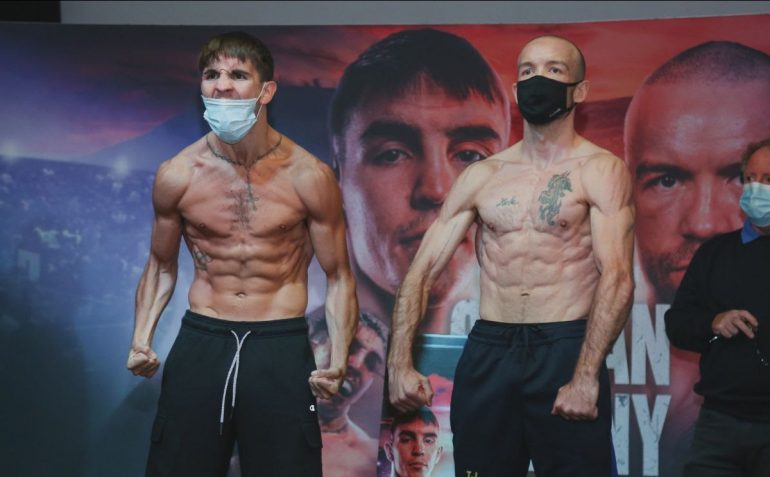 Although it was a competitive fight, Conlan was always a step ahead and was awarded the decision by the scores of 119-109 and 116-111 (twice).

Both men looked to establish their jabs in the opening round, baiting and feinting each other. The pattern continued in the second and third round. However, Doheny was able to bloody Conlan’s nose.

Conlan began to have more success over the next couple of rounds and dropped the former IBF 122-pound titlist with just over 40 seconds left in Round 5 with a body shot. Although Doheny was able to get off the canvas, he was visibly hurt and hung in there after a barrage of shots from Conlan. To his credit, he fired back and landed a good shot of his own in the final seconds.

Doheny responded well and gave his all but Conlan was able to use his ring smarts and skills to stay ahead.

The 29-year-old Conlan (16-0, 8 knockouts) was able to get the better of the sometimes scrappy action and pick up the points. It was never easy and Doheny, who beat Conlan’s older brother Jamie in the amateurs, made Conlan work hard in the second half of the fight.

Doheny (22-3, 16 KOs) continued to have moments and cut Conlan under the right eye in the eighth round. However, it was Conlan’s clever boxing that helped him take control of the fight. Doheny roared out and enjoyed a strong 11th round.

Both men stood and fought toe-to-toe whilst cheered on by the fans in the final round.

Afterwards Conlan spoke about what it was like fighting in front of his hometown fans.

“I’m honored and elated to be able to do this in front of the fans,” said Conlan. “Against a fellow Irishman, who you saw is a tough motherf_cker . It’s an honor to share the ring with TJ and I’m delighted to get the win.

“I knew I’d get him to the body but I knew he’d be there till the end because he’s a tough motherf_cker and he can punch too.

“Overall, I’m happy with the performance. At the end I could have just boxed my way to victory but I wanted to put it on for the fans.”

“I planned to go to 122 and this opportunity came up last minute and I said, ‘No problem.'” said Conlan. “I’m still looking to fight the winner of Stephen Fulton-Brandon Figueroa but now my options open up even more because I’m ranked highly with the WBA at featherweight.”