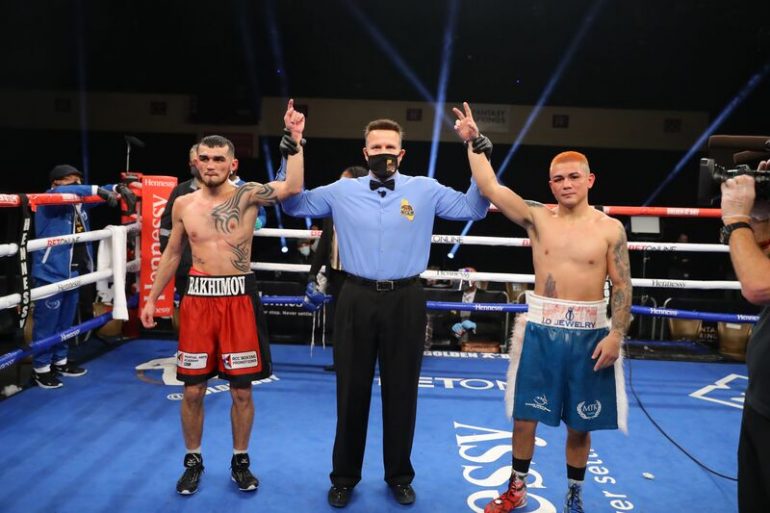 The 12-round bout will take place at the Conrad Dubai in the United Arab Emirates.

Rakhimov, who is rated No. 6 by The Ring at 130 pounds, is originally from Tajikistan and now resides in Ekaterinburg. On February 13, he fought to a majority decision draw against Joseph ‘Jo Jo’ Diaz, who lost the IBF title on the scales when he failed to make weight.

The 26-year-old Rakhimov owns stoppage victories over Azinga Fuzile, Malcolm Klassen and Robinson Castellaños. He is promoted by German Titov, managed by Egis Klimas and has a record of 15-0-1 (13 KOs).

Ogawa (25-1-1 1 NC, 18 KOs), who resides in Tokyo, fought for the vacant IBF title against Tevin Farmer in December 2017. He was initially awarded a close split decision but the result was changed to a no contest when Ogawa tested positive for the banned substance Androstanediol.

Since the Farmer fight, Ogawa has won three of his last four bouts. In his most recent outing, on October 2, the 33-year-old defeated Kazuhiro Nishitani by unanimous decision.

In the co-feature, cruiserweight Ali Baloyev (10-0, 7 KOs) of Kazakhstan will square off against hard-hitting Rolly Lambert Fogoum in a 10-round bout. Fogoum (11-1-1, 10 KOs), who is originally from Cameroon and now resides in Dubai, has won his last nine bouts, all by knockout.

In a clash of unbeaten fighters from Thailand, Apichet Petchmanee (9-0, 2 KOs) will face 19-year-old Phumiritdet Chonlathondamrongkun (7-0, 7 KOs) in a 10-round lightweight bout.