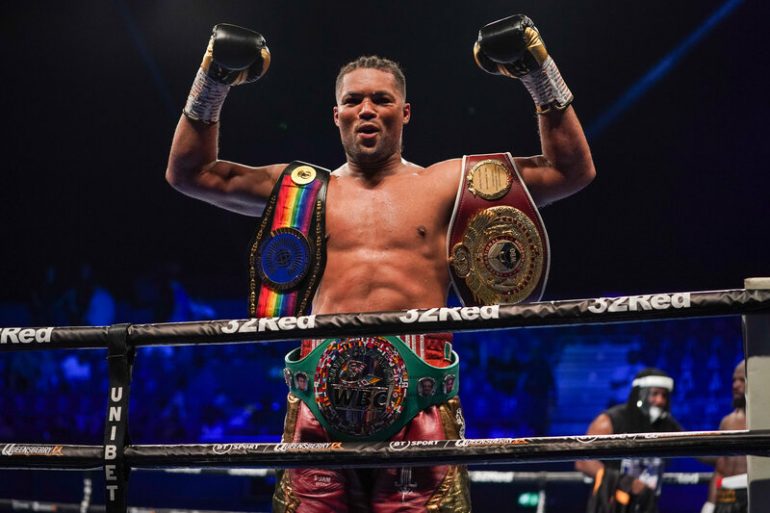 Heavyweight contender Joe Joyce came through the rugged challenge of Carlos Takam a week ago to stay in the frame for the leading lights including Anthony Joshua and Oleksandr Usyk.

Joyce and Frenchman Takam shared six rough rounds at Wembley Arena in London but the Englishman improved to 13-0 (12 knockouts) and is in line to face the winner of the heavyweight title contest between Joshua and his WBO mandatory challenger Usyk next month.

“It was a good fight, it was exciting, I think the crowd was overreacting to the shots that were thrown at me,” said Joyce, playing down the blows he was caught with. “They weren’t really bothering me too much, I felt pretty comfortable. I was landing the jab and other combinations. I thought it was a good fight, I saw that opportunity with the left hook and wobbled him and then came in for the kill. I had plenty more in the tank to take him down but I saw the opportunity and I wasn’t going to stop throwing punches until they stopped it.

“He wasn’t throwing much back, so it got stopped.”

Some contend the stoppage was early, including Takam, but others thought the intervention was timely because Takam was not firing back. When Carlos unraveled, he did so quickly. Joyce saw an opening and took it.

“I threw a combination and finished with a strong left hook and he staggered back and I followed in,” Joyce explained. “I just saw the cause and effect. The cause was my left hook, the effect was he wobbled backwards.”

The crowd roared in appreciation and Joyce approved of their reaction. His previous fight, a win over Daniel Dubois, was behind closed doors and he was happy to have the crowds back for the Takam battle.

“I sometimes react [to the noise] but I do my own thing and follow the plan and when I see openings and opportunities, I take them. I don’t let them slip by and let them recover,” Joe continued. “It’s great to have the crowd back to walk out to with the entrance music, to have friends and family there and have people supporting and be smiling at people on the way down and on the way back and taking pictures. It’s great to have them back, it makes it more exciting.” 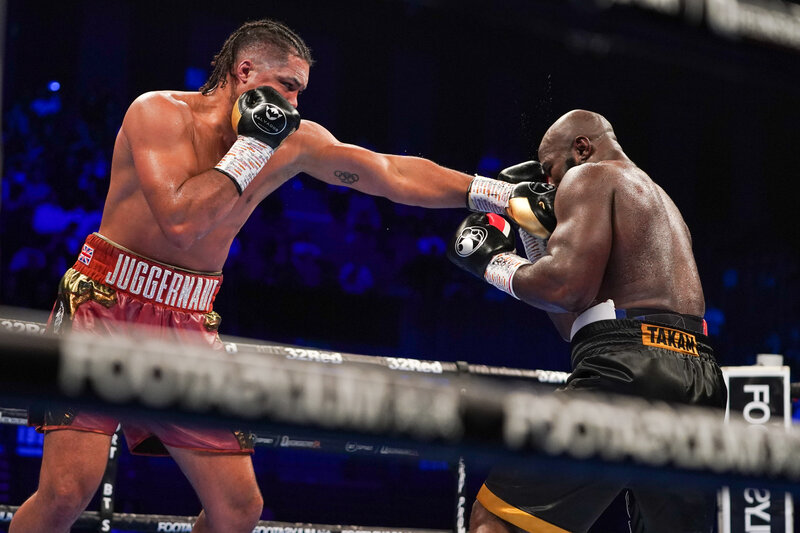 “Takam had success with the punches because he’s a good fighter and I remember one shot I thought ‘That’s a good shot,’ because I thought he was going to throw an overhand right and he was going to try and knock me out with it but he threw a straight right, right down the pipe,” Joe recalled. “He’s a good fighter, experienced, he’s been in with the best and he comes to win but I wasn’t going to let that happen.”

What of the negative criticism post-fight?

“I’m not too bothered,” Joyce said. “People can talk, but until they’ve won an Olympic medal or won the belts I have in such a short amount of time, they can keep chatting whatever they want.”

Besides, he’s now looking forward rather than back. He’s hoping to be ringside when Joshua – who he’s sparred plenty of rounds with – fights Usyk, whom he lost to in the amateurs, but revenge is not a primary motivator.

“No, I’m not too bothered, I respect Usyk,” he said. “Usyk’s a great fighter, a gold medalist, undisputed at cruiserweight and moved up to heavyweight and he’s got quite a resume. Ideally, I would have fought him while Joshua-Fury took place, but now Joshua is fighting Usyk, if he manages to win I’ll fight him again as a rematch.”

Joshua is the primary target because of the financial bounty that would be at stake and “The Juggernaut” reckons Joshua would be a harder fight for him than Usyk.

“I would be more surprised if Usyk beats Joshua than if Joshua beats Usyk,” he said.

For now, Joyce will have a couple of weeks off and then head back to the gym.

While he plans on keeping the same team, he might head to Las Vegas to work with former coach Ismael Salas and he talked of perhaps even fighting out there.

With Fury-Deontay Wilder 3 still to play out and the possibility of Joshua-Fury appearing once or even twice on the boxing calendar in 2022, Joyce might be waiting quite a while but he will be ready when the time comes.