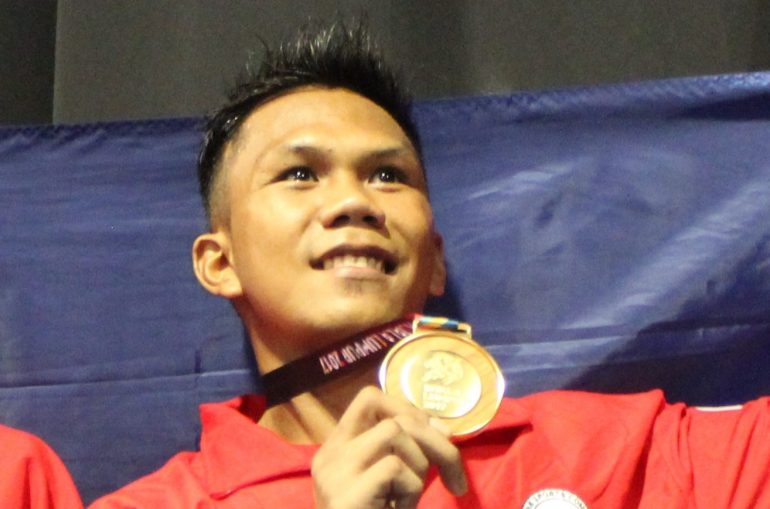 Eumir Marcial has yet to see the second round at the Tokyo Olympics.

The Filipino middleweight advanced to the semifinals with a highlight reel first round knockout of Armenia’s Arman Darchinyan on Sunday, August 1 at the Ryōgoku Kokugikan in Tokyo, Japan.

Marcial, 25, scored a standing eight count early on before a three-punch combination – punctuated by a right hook from the southpaw – left Darchinyan face-down on the canvas. The referee waved the bout off at the 2:11 mark.

Eumir Marcial assured 🇵🇭 a 3rd medal in Tokyo Olympics. On to the semis! pic.twitter.com/I6aWo2tv8s

Both Marcial and Darchinyan (the nephew of former world champion Vic Darchinyan) are also professional boxers who train under Freddie Roach at the Wild Card Gym in Los Angeles.

Marcial, who won a silver at the 2019 World Championships, had drawn a bye in the round of 32 and then defeated Younes Nemouchi of Algieria on an injury in the round of 16. He’ll face Oleksandr Khyzhniak of the Ukraine in the semifinals on Thursday, August 5.

Khyzhniak, 25, won the middleweight gold at the 2015 World Championships in Germany, and advanced to the semifinals with a 4-1 decision over Euri Cedeno of the Dominican Republic.

Khyzhniak holds a prior win over Marcial, in the semifinals of the Strandja Tournament in February of 2019. Marcial had received a standing eight count in the second round and withdrew at the beginning of the third round due to a left hand injury.

Marcial’s win means the Philippines is guaranteed at least two boxing medals, as women’s featherweight Nesthy Petecio has already advanced to the gold medal match, where she’ll face Japan’s Sena Irie on August 3. The Philippines has one other active boxing bet, flyweight Carlo Paalam, who will meet defending gold medalist Shakhobidin Zoirov of Uzbekistan in the quarterfinals.

Boxing has traditionally been the country’s strongest Olympic event, but the Philippines hadn’t taken home a boxing medal since 1996, when Mansueto “Onyok” Velasco earned the light flyweight silver in Atlanta.

The Philippines had earlier ended their dubious distinction as the most bemedaled nation without a gold after Hidilyn Diaz won women’s weightlifting gold for the country earlier in the week.

The Zamboanga City, Philippines native Marcial entered the tournament with a lot of attention behind him, having signed a professional contract with Manny Pacquiao’s MP Promotions. He turned professional last December, defeating Andrew Whitfield by unanimous decision on a Premier Boxing Champions card.