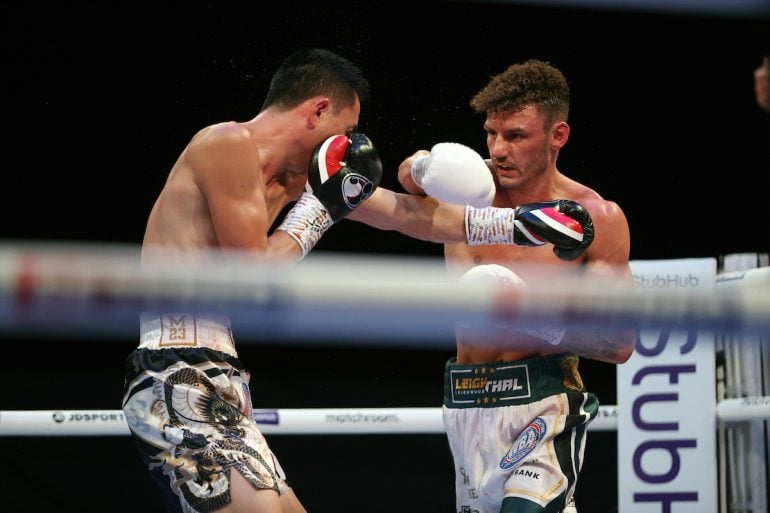 The Nottingham man, a hefty pre-fight underdog against The Ring’s No. 3 featherweight Xu Can, produced the performance of his life to stun and then knockout the feared Beijing man, stopping him with 17 seconds remaining in the 12th round.

He tried to work the body in the first round, surely making a concerted effort to slow down the inevitable charge from Can.

Can started the second quickly but a Wood uppercut and subsequent body attack had the man from China covering up. Towards the end of the round, Wood landed a clean right and another downstairs, too.

Can was taking plenty on the gloves but Wood landed two more rights and another uppercut in the third, all the while still investing to the body.

Wood was looking sharp, Can was his persistent self but his output was greatly reduced. Then the Nottingham challenger caught the eye with a right uppercut-left hook that jolted Can’s head back.

The usual avalanche of leather from Can was not forthcoming. Wood was keeping him honest with his power and accuracy and he kept him guessing with his variety, too.

Can didn’t seem to have the answers and his shorts were being dyed with his own blood.

Can would score with occasional shots but Wood was boxing with swagger and increasing confidence. He switched southpaw to open the eighth and landed some thumping shots in that session with little coming back in reply.

Can landed a flashy right at the opening of the 10th but Wood rode it and, later in the round while in the southpaw stance, the Nottingham man pounded home a right hand-left hook.

Wood was outboxing him in both stances and he scored well with a volley of shots in the middle of the 11th.

Leigh clumsily took a big right at the bell but he’d won another round by that point and just needed to stay on his feet to spring the upset.

Can’s face was swelling by the end and Wood scored with both hands around Can’s gloves before dropping him with a right hook. Can stood back up but Leigh piled in behind both hands and referee Marcus McDonnell waved it off with Can under fire.

“I only had six weeks’ notice for that fight but I live the life of a professional fighter,” said Wood.

Eddie Hearn called it an “incredible performance” and said the stoppage was “a real statement” and he felt Can hadn’t won more than three rounds. “Leigh can go back a real hero,” said Hearn. “He’s changed his life and it’s a brilliant story for British boxing.”