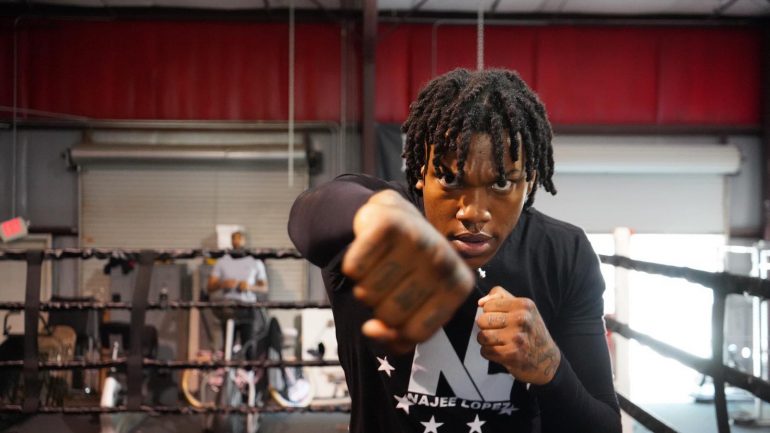 Najee Lopez woke up the morning after his second U.S. Olympic trials bout in December of 2019, and knew it wasn’t even worth getting out of bed. His right eye, which had been cut due to an accidental headbutt against Darius Fulghum, was completely shut, and he knew there was no way he would ever be cleared to compete at the medical exam. Despondent, he remained in his hotel room in Louisiana, pondering his future.

His Olympic trial dream didn’t end that day, though. A week later, he’d get a call from the Puerto Rican team – his late father Tito Lopez Sr. is Puerto Rican – asking if he’d like to fly over and compete for a chance to be their 201-pound representative. Lopez accepted their invitation, and he finished as the runner-up, but the COVID-19 pandemic had already shifted the way the sport was playing out. The Americas qualifier would once again be canceled, and traveling with the team for tournaments would become a difficult proposition. Lopez looked at the signs and decided it was time to turn professional.

That will come on August 14, when he faces an opponent to be named in a four-round cruiserweight bout at the Cosmopolitan Lounge in Decatur, Ga. The bout will be part of a card headlined by Lorenzo “Truck” Simpson vs. Manny Woods.

For Lopez, a 6’2” big man from Atlanta, moving on hasn’t been easy on any front. This next step in his career will be without his father, who died last December. Lopez had trained him since the first day he put on gloves at age 13, teaching him moves in their living room. His father guided him to a number of amateur achievements, including the 2015 National Junior Olympics title, and the gold medal and Outstanding Boxer Award at the 2019 Olympic National Qualifiers in a career that included over 140 bouts.

“My pops was always right there in my corner. Every fight he’d be in the corner,” remembered Lopez, whose older brother, Hakim Lopez, is a 9-0 (5 KOs) light heavyweight.

“I’m still grieving. I just told myself, I’m gonna put that stuff in the past and I’m gonna just go to the next level and turn pro.”

Lopez is the first signee for Cleveland-based manager Tim VanNewhouse since parting ways with Split-T Management earlier this year. Van Newhouse sees Lopez as the sort of talent he can build a stable around.

Lopez typically trains out of his family’s Granite City Boxing & Fitness Club when he’s at home in Georgia, but is now working with trainers Asa Beard and Mark Farrait in Tampa.