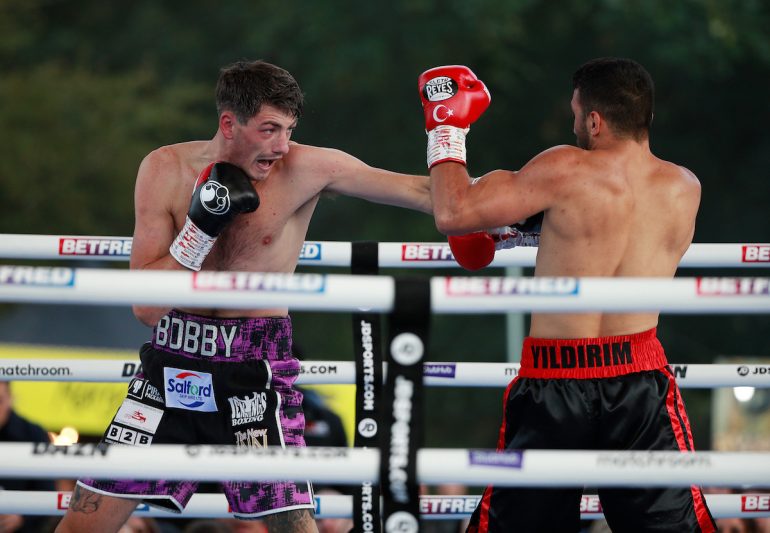 It was a hard fight and Yildrim thought he won. He certainly deserved more credit from the judges.

The taller Cullen was busier behind his long limbs and scored well in close and at distance but he couldn’t deter Yildrim’s march through the first round.

The visitor came into it more in the second as Cullen seemed to slow through the middle part of the round and Yildrim applied steady pressure through the next, even though he was sporting swelling by his right eye as he caught plenty of punches.

Cullen took a couple of booming rights in Round 4 and the early sting seemed to have left Jack’s shots as Yildrim stepped up his pursuit.

The sixth was a hard, physical and draining session and by Round 8 Cullen was left heavy-legged by a left hook and he bled from the nose.

It was a fantastic struggle and Yildrim sensed he was in control when he celebrated at the bell to close the ninth.

Sandy Ryan won her professional debut with a comprehensive points verdict over Kirsty Bavington in the opening bout to this year’s Fight Camp.

Ryan started well, popping the jab and landing some eye-catching shots, including a short right uppercut while in close.

Sandy, who stood between rounds to listen to instructions from her trainer Clifton Mitchell, switched stances throughout and crashed home a right in the second and another big counter right in the third. She was in the ascendancy throughout and showed click defensive moves against Bavington, who kept coming, despite taking a couple of big shots in the final session of a brisk junior welterweight six-rounder.