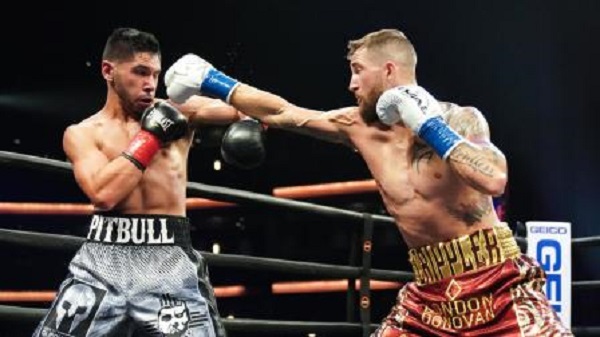 COVID-19 is on an unprecedented run versus Premier Boxing Champions cards.

Canadian welterweight prospect Cody Crowley is the latest victim. He tested positive for the virus and withdrew Thursday from his bout against two-time Olympian Gabriel Maestre.

Canada’s Crowley (19-0, 9 knockouts) and Venezuela’s Maestre (3-0, 3 KOs) were slated to tangle August 7 in a scheduled 12-round, FOX-televised affair, from The Armory in Minneapolis.

According to BoxingScene, PBC matchmakers are seeking a replacement opponent to face Maestre on short notice.

This marks the second time this week that a “FOX PBC Fight Night” main event was amended due to COVID-19.

It was reported Tuesday that Gerald Washington had withdrawn from his 10-round fight against Michael Coffie due to COVID. The two heavyweights were supposed to battle on Saturday evening, at Prudential Center, in Newark, New Jersey. Jonnie Rice has since stepped up on short notice to face the unbeaten Coffie.

Two bouts on Saturday’s undercard in Newark were also nixed on Thursday morning. Welterweight Justin DeLoach, who was supposed to fight Paul Kroll, and junior lightweight prospect Maliek Montgomery, who was tabbed to take on Angel Contreras, both tested positive for COVID-19.

However a bright spot on FOX’s three-bout August 7 card is the return of undefeated 147-pounder Eimantas Stanionis (13-0, 9 KOs), of Lithuania, who squares off against Brooklyn’s Luis Collazo (39-8, 20 KOs), a former WBA titleholder, in a 10-rounder.