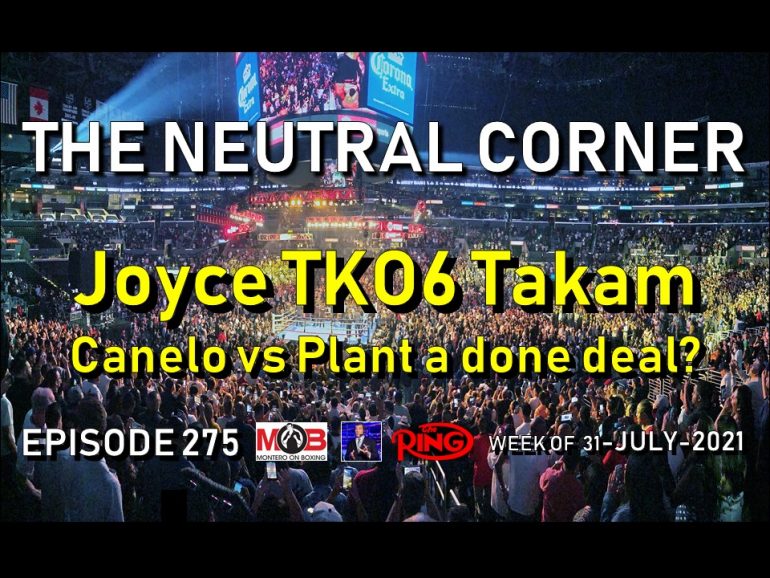 On episode 275 of The Neutral Corner boxing podcast, host Michael Montero gave his thoughts on the negotiations between Canelo Alvarez and Caleb Plant. A deal was close for the two fighters to completely unify all four of the super middleweight world titles on September 18 in Las Vegas.

However, after TNC Ep.275 was posted, it was revealed that negotiations between Canelo’s team and Premier Boxing Champions (PBC) had fallen apart. ESPN’s Mike Coppinger first reported the story. Apparently, there were disagreements over the contract. At present, the fight is off.

Per sources, Canelo was set to make $40M and Plant $10M, both career-high paydays, on a PBC on Fox PPV. A deal could still be worked out for September 18, but time is of the essence.

On Saturday July 24, undefeated heavyweight prospect Joe Joyce scored a TKO6 win over Carlos Takam. The veteran started well, scoring with overhand rights early on. But Joyce came on in the middle rounds and hurt Takam at the start of the sixth. Referee Steve Gray stopped the bout after Joyce followed up with an onslaught of punches, while Takam failed to counter once. The “Juggernaut” is now 13-0 (12 knockouts) and is rated No.2 by the WBO. He will be in line to face the Joshua vs Usyk winner at some point in the near future.

“I feel like The Ring made a huge mistake by not reinstating Joshua as No.1 when he beat Ruiz in their rematch,” said a caller from London. “Losses are overrated.”

“I think Chisora, Parker, Yoka, even Breazeale, would be good options for Joe Joyce at this point,” said Nacho. “He needs to face more guys who have gone rounds and have experience to get him to that next level.”

“I like the prospect of a Sebastian Fundora vs Sergio Garcia fight (rumored to land on the Pacquiao vs Spence PPV card),” said a caller from Minnesota. “I’m really looking forward to it.”

“As an Ohioan, I’d be pulling for Shawn Porter if the fight with him and Terence Crawford comes together,” said Andrew. “But I’m really nervous that boxing politics might get in the way of that fight”.

“I’ve been looking everywhere, but can’t find a report on the WBC 30-day weigh-in for Errol Spence and Manny Pacquiao,” said Thad. “I’m curious, that’s something I’ve been looking for because I want to bet on that fight.”

“I know that GGG is 39 years old and that he was ducked in his prime,” said Jack. “But right now he has a chance to fight Andrade, and it looks like he’s going to stay inactive until the end of the year when he fights Murata. I’m just upset because I think he would beat Andrade easily.”