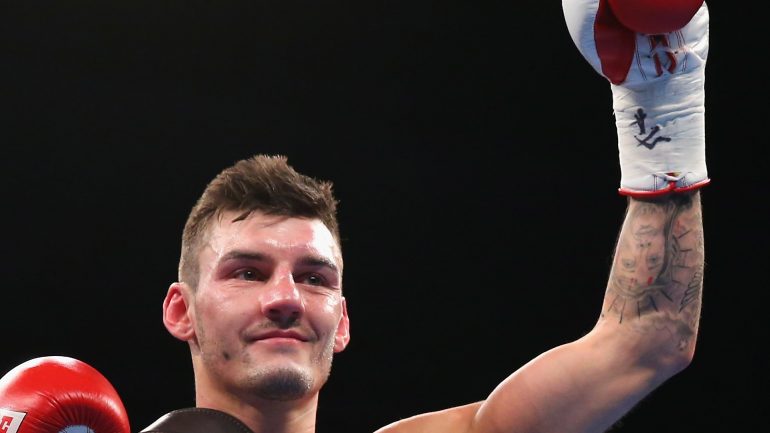 “As every fighter says, I’m in a very good place,” Leigh Wood smiles, trotting out the mandatory fight week sentiments.

But then he stops to specify why he’s feeling confident ahead of this weekend’s shot at Can Xu, The Ring’s No. 3 featherweight.

“Obviously I’ve had more time with [new trainer] Ben Davison than I did for my British title fight [against Reece Mould]. I only had about six or seven weeks with him, so it was all new and I had to trust what Ben was saying and making me do and now I’ve got a lot more trust in him after the last performance. I’ve spent a lot more time with him before this fight and I’m very confident in the game plan and the things we’ve been working on to get the win.”

Wood, 24-2, defeated Mould via ninth-round stoppage back in February with an impressive performance that saw him capture the British title.

On the same night, Josh Warrington lost to Mauricio Lara when he had hoped Can Xu was going to be in the opposite corner rather than the unheralded Mexican.

That Can Xu is world class and the bookmaker’s favorite means Wood is in the underdog role, but he said that doesn’t take the pressure off – because he doesn’t feel the pressure at all.

“I only put pressure on myself,” he explains, “the same as a British title fight, Commonwealth title fight [when he beat Abraham Bonsu], I take it for what it is. I don’t even think about what it’s for [title or ranking-wise], that’s first and foremost. Secondly, I take away how much I’m getting paid because that’s irrelevant to me as well, and I take away the status of what it’s for and I just focus on me and him, so all I’m focused on is my opponent. There’s no pressure. There are expectations but there’s no pressure. I know what I need to do and I’m going to get the job done.”

The Nottingham man is 32 and entering just his second fight with Davison but he said their relationship is blossoming the more time they spend together.

“He cares about his fighters,” Wood continues. “He’s not doing it for the money, he’s doing it to help us fulfil our potential. For example, the amount of time and effort for the British title fight and the amount he got paid wasn’t great, but he does it because he wants his fighters to achieve their potential and that’s the best thing about Ben. “He’s genuine and he knows his boxing as well.”

Between the two of them they’ve been drawing up the strategy for what they hope is a winning formula. But Wood admits Xu is “a great fighter.”

“He’s great at what he does,” Leigh adds. “If you let him get momentum and do what he’s good at you’re in for a very hard night, so there are things I need to do to take away that he’s good at and it’s going to be a very good clash of styles.”
Is Wood looking for an entertaining fight? When the aforementioned Warrington-Xu contest was on tap, fans salivated at the potential of an all-action war.

“If you look at a history of fighters with a high output, like a volume puncher, against a big puncher like I consider myself to be – I’ve won six titles all by knockout – what you normally get is the volume puncher [Xu] throwing a lot of punches but their hands aren’t by the side of their head and a big puncher can time a shot, so it should make for an exciting fight and it’s a 50/50 pick ‘em,” Wood continues.

“Is the big puncher going to land and close the show or is the volume puncher going to keep throwing? But it’s going to be a very smart and educated game plan by myself where I take away his best asset without him knowing what I’m doing.”

Wood came close to stealing the show against Warrington’s stablemate Mould earlier in the year and certainly had people sit up and take notice. It’s what has got him the Xu fight.

“Reece is a good fighter and I don’t think he needed to win that [British] title to prove he was at that level,” says Wood. “I think he was already European level, he’s a very good fighter but I put my trust and faith into Ben, followed the game plan and, like Ben said, I punch very hard and there aren’t many kids at my weight who can produce that power and that’s a great asset to have in the bank.”

Wood’s stock has never been higher and he credits his two defeats with helping him improve as a fighter. In 2014 he was stopped in six by future European champion Gavin McDonnell and in 2020 he lost a majority decision to future world title challenger Jazza Dickens.

“You learn so much from a loss,” Wood explains. “Not only do you go away and get better, if you’ve got the right attitude, you go away and get better and learn as you go and it’s all about experience. If you’ve got the attitude when you get beat and you beat yourself up, you’re going to be a million miles away from where you need to get to. But it’s all about picking things up. The McDonnell fight, I shouldn’t have even been at that weight but I learned how to make weight and about the pace of a fight and I learned it the hardest way. And when you learn the hard way, you tend not to forget it. The Dickens fight, he was the first southpaw I boxed a pro and a good one at that. I felt I couldn’t land clean, but I didn’t go into that fight with a game plan and that’s what I’ve learned. You need to have a plan and you need to know straight away what you’re going to do to take away what your opponent’s best at.”

The stage is set. Xu-Wood is part of a huge night at what’s often been called Matchroom Square Garden as Fight Camp kicks off its three-week summer stint in Essex on a bill headlined by Conor Benn-Adrian Granados in front of several hundred fans.

“Obviously it’s Matchroom’s first fight without Sky, live on DAZN, so I’m sure they’ll make it a spectacle. I don’t think I’ve boxed outdoors before so that’s new but it’s nice to have a crowd back. I waited 20 years to win the British title and looked around an empty room. I couldn’t go on holiday, I couldn’t go to any pubs and bars so it’s going to be different to have a few people there.”