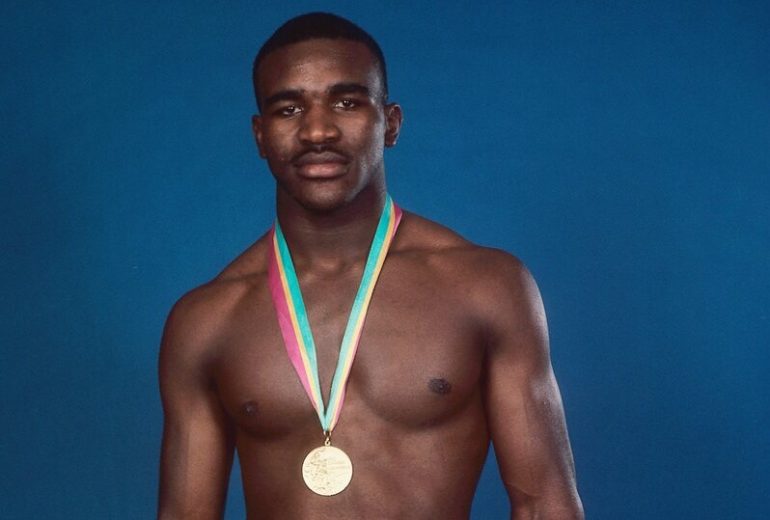 Olympic boxing is well under way in Tokyo. The action will play out over the next week, with the finals in the eight male weight classes taking place between August 3 and August 7. During that time, we’re sure to discover some stars for the future.

Over the years, the biggest names in professional boxing have been given a considerable leg up due to their exploits at the Olympic games. Here are 20 male medal winners who have shared their various experiences with me over the years.

NINO BENVENUTI
Welterweight gold medal (Italy) and Val Barker winner
“That was the greatest victory of my life, the most meaningful. Representing Italy at the Olympics was what I dreamed about since I was a boy. You can imagine what winning the gold medal in Rome meant to me. I consider my Olympic win as my best overall. You know why? Because it lasts forever. I’m now a former middleweight champion of the world, yet I’m still an Olympic gold medalist.”

GEORGE FOREMAN
Heavyweight gold medal (USA)
“That was the start of my dreams. I never knew a dream could come true until the Olympics. I stood on that platform listening to my national anthem with the gold medal around my neck. The best thing and most wonderful feeling I had in boxing – period. Never had anything like that happened to me before or after.”

MELDRICK TAYLOR
Featherweight gold medal (USA)
“I reached the pinnacle of amateur boxing, winning a gold medal. That is the ultimate thing to do.”

PERNELL WHITAKER
Lightweight gold medal (USA)
“I was with 11 of the greatest guys you could wanna be with. We were teammates, we were together all the time, we supported one another when guys had fights, everybody showed up. It was fun being around. It’s like one big family, having 11 brothers. The Olympics was different. It was the most successful time in my life winning the Olympic gold medal.”

FRANK TATE
Light Middleweight gold medal (USA)
“I saw the ’76 Olympics and Muhammad Ali [commentating] on TV and I said, ‘Man, I can do that!’ I told my momma and she laughed at me and said, ‘Boy, be quiet!’ I said ‘Mom, I can win an Olympic gold medal!’ I was happy to be there. It was so tough, but it was my dream ever since I was a kid. When I finally got there, I wasn’t going to let nothing distract me. I was like those racehorses with those patches on; all I could see was straight ahead. I went there for that gold medal and I wasn’t going to be denied. When I brought that medal back my mom was the first person I showed it too because I wanted to show her I did it.”

EVANDER HOLYFIELD
Light Heavyweight bronze medal (USA)
“We did that for free. We were doing it for the country. That’s what the Olympics were – they meant more [than money]. It gave us an opportunity to show how great our country is.”

HENRY TILLMAN
Heavyweight gold medal (USA)
“I started late… I was 21 when I started boxing. I lived in Colorado Springs for 18 months training for the Olympics. I got to travel in and out of the country and I learned a lot. I got some lifetime friends out of it; coaches and other fighters, [Evander] Holyfield, [Mike] Tyson, we all became like family. We competed against each other, but when we went to other countries, all we had was each other. It was so special because it was in Los Angeles, my hometown. My mom, my dad, schoolteachers, friends I was raised with got to come and watch me compete.

“Gina Hemphill [granddaughter of Jesse Owens] came out the tunnel with the torch, ran around and handed the torch to [1960 Olympic decathlon gold medalist] Rafer Johnson, who ran up the steps and lit the Olympic rings. I told Mark Breland, Evander Holyfield, Paul Gonzalez and Frank Tate, ‘That’s going to be my wife.’ They said, ‘You don’t even know her!’ [Laughs.] I went to [track and field star] Carl Lewis and asked if he knew her. When he said, ‘Yeah.’ I said, ‘Introduce me to her.’ That’s how we initially met. We exchanged numbers and met again at a book signing after the Olympics and became an item after that. We were together for 11 years. The Olympics was the ultimate. Andrew Massone, I beat him in the semi-finals, we’re still friends to this day via the internet. We talk all the time on Facebook.”

TYRELL BIGGS
Super Heavyweight gold medal (USA)
“I was excited to be boxing, winning and doing well. Winning the World Championships meant a lot to me, and it was pretty surreal [fighting at the Olympics]. I was so thankful that I was able to come through and win, that was pretty much the highlight of my career.” 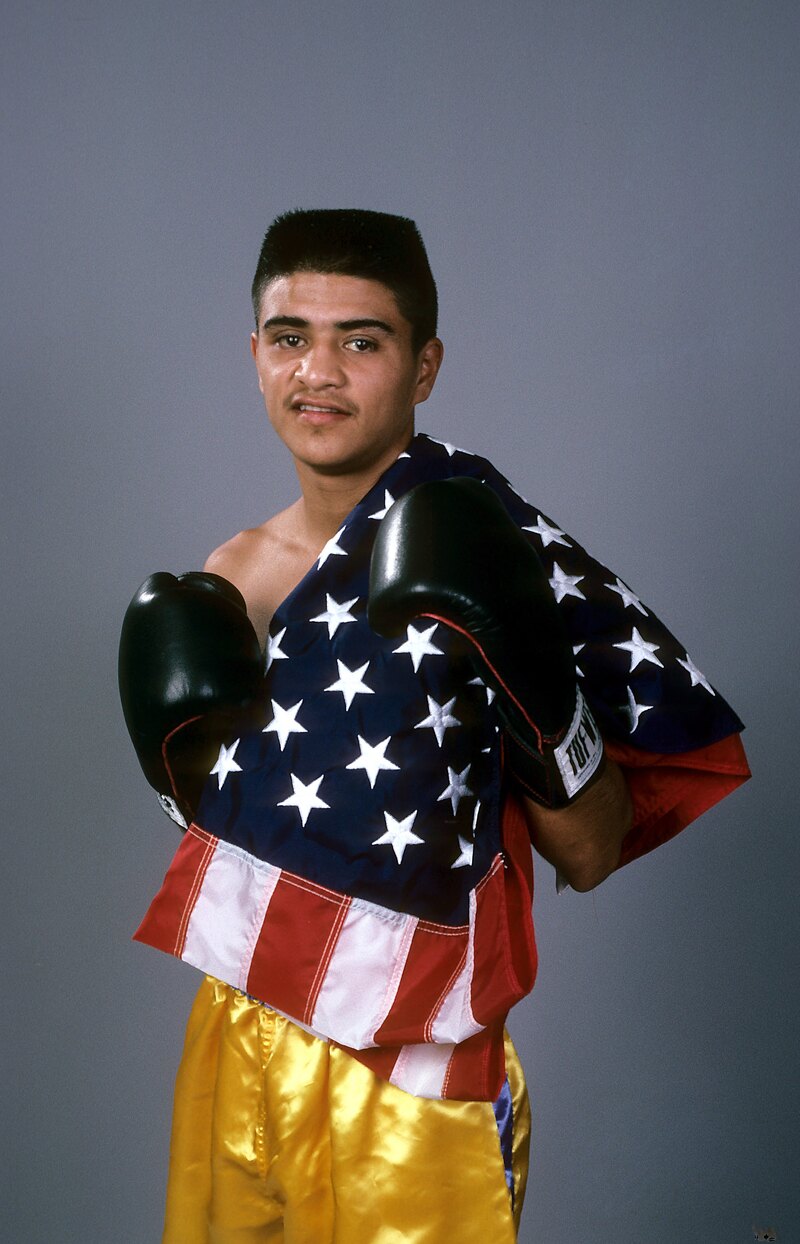 MICHAEL CARBAJAL
Light Flyweight silver medal (USA)
“It was great. I didn’t know how the Olympics would be. I was just fighting, and once I made the Olympics it was a great experience because you’re there with people from all over the world. You’re meeting so many athletes from different sports and you’re like, ‘Wow!” I won silver and loved it. I have no regrets at all.”

KENNEDY MCKINNEY
Bantamweight gold medal (USA)
The Tennessee resident was given the squad number 0316: “I said to myself, ‘316 John: For God so loved the world, that he gave his one and only Son, that whoever believes in him shall not perish but have eternal life.’ When I realized the number, I was like this gold medal is mine. To me, God was in my corner and I was going to win the gold medal, there was no doubt.”

LAURENT BOUDOUANI
Welterweight silver medal (France)
“During the Montreal Olympics in 1976, I saw Sugar Ray Leonard. I loved it. Looking at his footwork, I was attracted to his shoes and wanted everything. I loved boxing. It was the apotheose, unforgettable moments engraved in my head. I lost in the final against Robert Wangila.”

HENRY MASKE
Middleweight gold medal (Germany)
“The moment of an Olympic victory will remain unforgettable for me. That was the greatest thing for me.”

RAY MERCER
Heavyweight gold medal (USA)
“It was the best thing that ever happened to me to tell the truth. I was not going to be denied, I worked too hard. I was 28 years old on the Olympic team, so I knew how important it was to train and I knew you only get a certain amount of chances. I was older than all the other guys. I think I took it a little more serious than they did. To have the whole country behind you was so exciting, I always dreamed of that.”

WAYNE MCCULLOUGH
Bantamweight silver medal (Ireland)
“Just getting to the Olympics for every fighter and athlete is an amazing thing. I got to go in ’88, but I didn’t get a medal. I got to see all the big athletes in my first Olympics. I saw guys like Carl Lewis and Sergey Bubka, who did the Pole Vault, even Daley Thompson. They were all people I looked up to. 1992 was the American Dream Team. When you’re walking around the village it’s sensational. The guy who beat me in the Olympic final, Joel Casamayor, went on to become a professional world champion as well. He lives in [Las] Vegas, I live in Vegas and when he defected back in ’96, he comes here. Every time we see each other to this day we always have respect. It’s a great feeling, you’ve made a friend for life. The Olympic experiences lasts a lifetime. Anybody from Ireland who’s 10-15 years younger or older [than me] remembers where they were when I won the Olympic medal.”

JOEL CASAMAYOR
Bantamweight gold medal (Cuba)
“I was very happy when I won the gold. I felt really good. I was very happy. I was content with everything. I was 21 years old.” 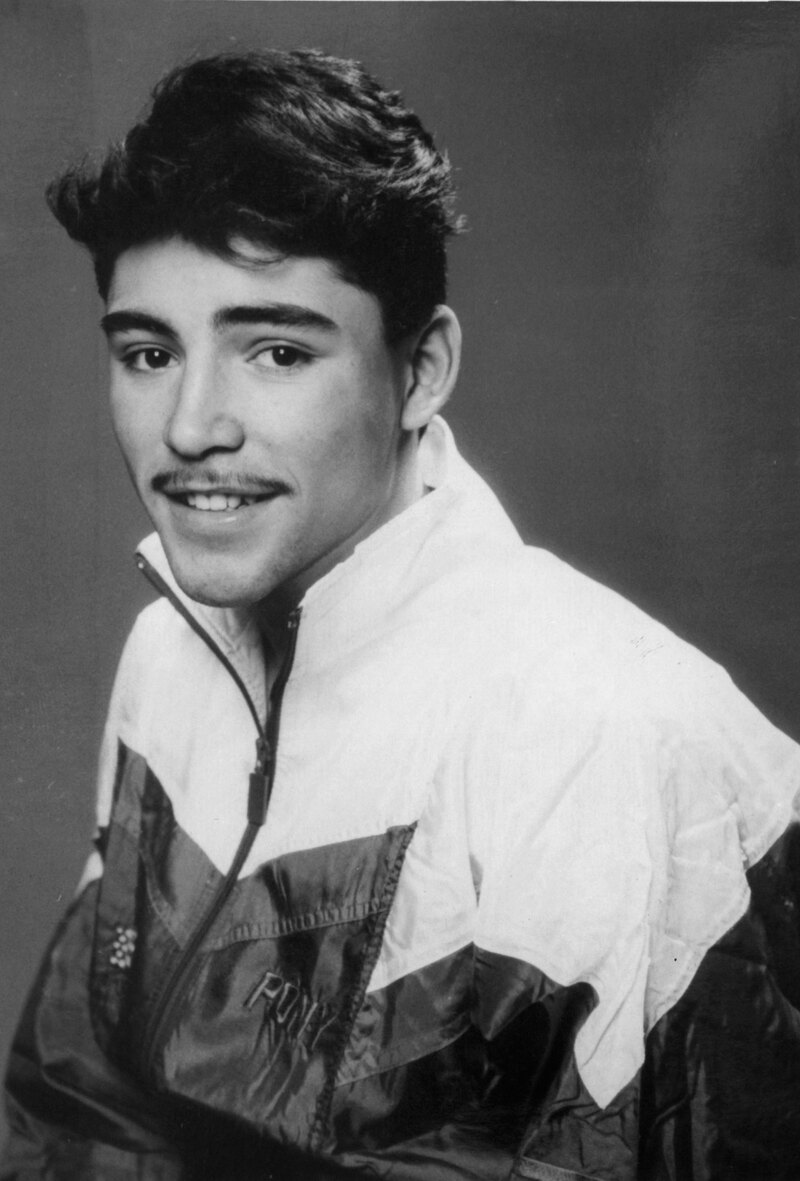 OSCAR DE LA HOYA
Lightweight gold medal (USA)
“Nobody can ever take that away. I’ve won many world titles and I’ve fought the very best in the world, but the Olympic gold medal is by far my prize possession. [This is because of) the pressure I had going into [the gold medal fight, and I was] doing it for my mother – she had just passed a few months before.”

CHRIS BYRD
Middleweight silver medal (USA)
“Oh man, I can’t even describe it, It’s the highest point in my career. Making that Olympic team was a dream for me.”

ROCKY JUAREZ
Featherweight silver medal (USA)
“I remember the fight very clearly. God had a plan. Some days you have good days, some days you have bad days. I lost that fight and I’m a big believer in faith. After I lost, I was questioning why. I worked so hard. I did everything I was supposed to do. Then came the day I received a call letting me know (Bekzat Sattarkhanov) passed away in a car accident that New Year’s Eve. I feel like [the victory] was his highlight because his time was coming.”

YURIORKIS GAMBOA
Flyweight gold medal (Cuba)
“As a Cuban amateur boxer losing is not an option. Whenever you enter a tournament, you enter it to win it. Of course, winning the Olympic gold was still very special. It makes you very proud when you achieve something great for yourself and your country. I knew that the world was watching and it made me feel great that I could live up to the expectations and win the tournament.”

ALEXANDER POVETKIN
Super Heavyweight gold medal (Russia)
“Winning the Olympics was my main goal, my main dream. I think this is the dream of all athletes who come to sports. And for boxing, amateur and professional, just count how many professional world champions and how many Olympic champions. An Olympic champion is an Olympic champion. Everyone who goes to sports, including boxing, dreams of Olympic gold.”