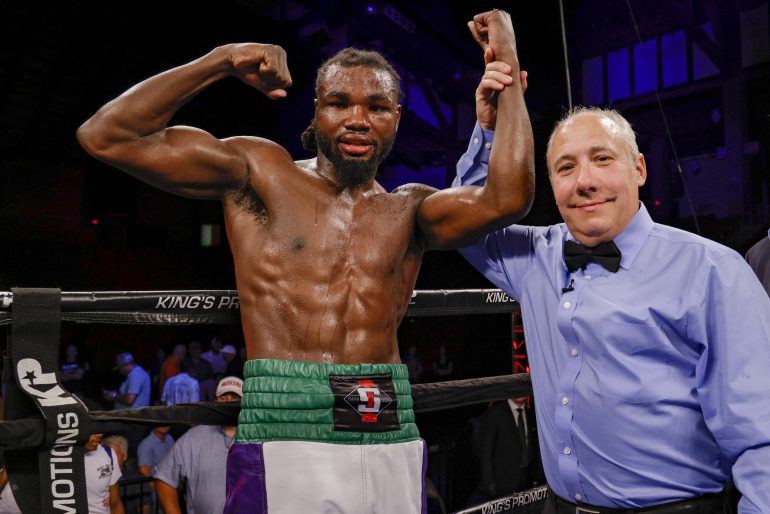 The game plan was simple. Box, stay on your toes and jab. Isaiah Steen stuck with the plan down to every dotted ‘I’ and crossed ‘T,’ as he won a unanimous 10-round super middleweight decision over previously undefeated Kalvin Henderson on Friday night marking the 20th anniversary of Showtimes’ ShoBox: The New Generation.

“I stuck with everything my coaches told me to do,” Steen said afterwards. “We thought we could outbox (Henderson) and doing it on the 20th anniversary of ShoBox makes it more special.

“I think I made a name for myself tonight. The next goal is to get on the Jake Paul-Tyron Woodley show with my brother (former U.S. Olympian Charles Conwell, on Aug. 29 in Cleveland).

“It means something to beat an undefeated fighter like (Henderson), and to do it the way I did it. I was out of the ring for eight months, but it didn’t mean I stopped training. I worked every day.”

Steen went 10 rounds for the first time in his career in the latter portion of the fight he was still on his toes. “It’s all from hard work,” Steen said.

The third round broke up what had been a steady pace. Steen seemed to hurt Henderson with a right to the jaw with 2:38 left in the round by Steen, followed by a left as he had Henderson against the ropes. About 30 seconds later, Henderson back Steen up with a counter right. With 2:04 left in the third, referee Mark Nelson called a cut on the corner of Henderson’s left eye caused by an accidental head butt. In the fifth, Steen caught Henderson again with a right. Steen used his distance well, staying on the outside, popping his jab.

In the sixth, Steen became more aggressive. He caught Henderson with a counter left, stirring a sweat halo. Steen kept packing away at Henderson, touching him with the jab, though ever careful of getting too close.

After six, it looked like Steen began separating himself in what was a close fight through the first four rounds.

In the seventh, Steen added to his lead by landing numerous power shots. Henderson, meanwhile, slowed and couldn’t catch up his clever opponent. Henderson dad nail Steen with a solid right near the end of the eighth, though it was still too little to win the round.

Both fighters entered the ninth round for the first time in their careers. Steen, who pocketed the fifth through eighth rounds, was still on his toes in the ninth. Henderson was left to follow him in the middle of the ring, but he didn’t step forward to Steen, who picked and moved and tabled another round.

By the 10th, Henderson needed to stop Steen to win.

Henderson connected on a triple jab inside of two minutes left in the fight, then he allowed Steen to sneak out of the corner and get back on his toes again. Steen did throw a quick barrage at Henderson in the last 10 seconds of the 10th.

When the final bell sounded, Steen felt certain he won.

In the co-feature, Shinard Bunch (15-1-1, 13 KOs) appeared to beat Janelson Bocachica (17-0-1, 11 KOs) in a 10-round welterweight bout, but judges Josef Mason and Jeff Sinnett didn’t see what everyone else seemed to see.

Mason had Bocachica winning, 96-94, and Sinnett had it a 95-95 draw, forcing a split-decision draw factoring in Mike Contreras’ 97-93 for Bunch. 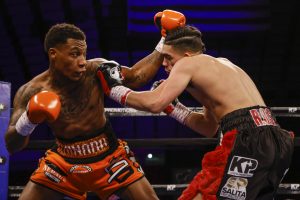 Bunch, 22, started well winning the first two rounds—and Bocachica’s corner knew it, telling their fighter once he got back to his corner that he was down two rounds. It seemed to get through, when Bocachica started the third very aggressive, though also very careless, which Bunch made him pay for.

Bunch frustrated 22-year-old Bocachica, who continued to throw wild shots at Bunch. Every time Bocachica got inside, Bunch tied him up. Bocachica tried using the double jab, and in the last minute of the fourth, he was effective with that approach again, though Bunch slammed him with a counter left.

As the fight entered the midway point, Bunch flicked an accurate jab at Bocachica, who appeared to grow more desperate. Through five, Bunch had connected on 55/209 (26%) total punches to Bocachica’s 52/185 (28%). Though the eye test proved more significant, and any eyes watching the fight had Bunch ahead after five.

As the rounds wore one, however, Bunch, who never previously went more than eight rounds, began to slow down. Bocachica began climbing back into the fight. He started backing Bunch up with lefts to the body and a steady jab. Bocachica closed the eighth with a jab and right to the body, and it looked like Bunch’s legs were gone.

In the ninth, Bunch found his legs, and began moving and striking with his jab again. Bunch closed the ninth with a counter right uppercut, which snapped back Bocachica’s head.

Bocachica didn’t fight with the urgency he needed, possibly feeling he was not losing the fight. With :40 left in the 10th, Bunch landed a great combination that popped Bocachica’s head back.

After the final bell, it appeared apparent Bunch did more than enough to win. 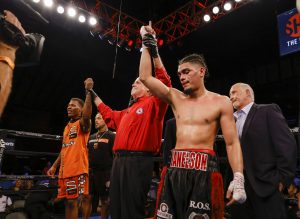 Shinard Bunch and Janelson Bocachica ended in a disappointing split-decision draw that many thought Bunch won (Photo by Esther Lin/SHOWTIME).

“Yeah, I won the fight,” Bocachica said. “I felt like he didn’t land anything that hurt me and I applied the pressure. I didn’t agree with the judges, but I’m the fighter not the judge. No, no, no. I wasn’t celebrating. Maybe my team was, but I wasn’t happy at all.

“I could have put pressure from beginning instead of the end. I could have used the jab more. I was being lazy with my right hand because I was going to knock him out. Those are things I need to learn.

“Oh yeah, there will be controversy after this. It comes with the sport.” 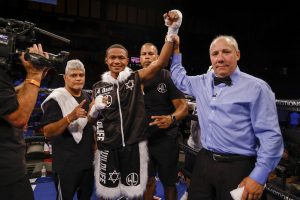 “He kept jumping right toward me, so I just kept listening to my corner and going with the left,” said Jules, who landed 85 of his 295 power punches to Avagyan’s 122 of 316. “As soon as he got caught with the left, he was off-balance and the left leg slipped and that was it.”

In the first two rounds, Jules kept catching the perpetually forward-moving Avagyan with more accurate shots. For his part, Avagyan did little but come forward in the opening two rounds and wrestle more than punch.

The third round placed Avagyan back into contention. He crowded Jules against the ropes and finally landed the punches he failed to throw early. In the fourth, Jules used an effective uppercut, though it wasn’t enough to keep Avagyan off of him. After four, it was easy to see the fight 2-2.

Just when the fight seemed to be swaying in Avagyan’s direction, Jules pulled back with a solid sixth, using movement, angles and counter punching to catch Avagyan once again coming forward. The seventh round was tight, with Avagyan having his moments, and Jules coming back with a barrage of his own.

With 2:14 left in the eighth, referee Mark Nelson warned Avagyan about using his head leaning forward. About a minute later, Nelson cautioned Avagyan one last time. With :52 left, Jules caught Avagyan perfectly with a left hand on the chin, dropping Avagyan as he came forward.

“I think the knockdown really helped me secure the round,” Jules said. “Once he got knocked down, he was rushing in to try and get the round back, which helped me since I could control the pace a little bit more.” 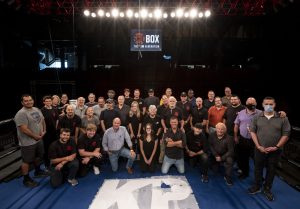