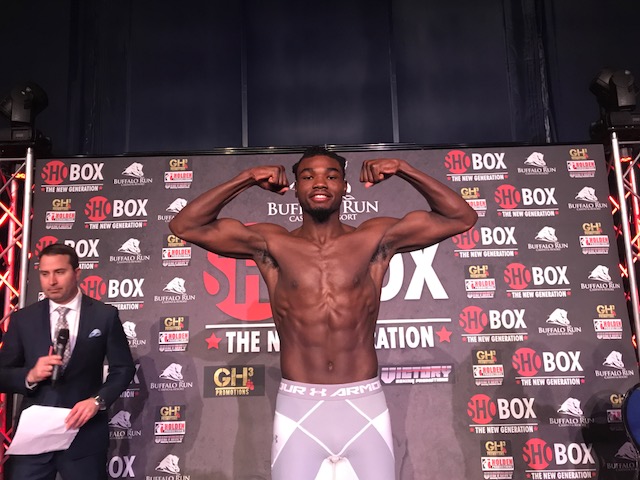 Isaiah Steen has a big challenge ahead against Kalvin Henderson this Friday on ShoBox.
21
Jul
by Joseph Santoliquito

Over the last year, Isaiah Steen has felt as if he’s been in one long training camp. That’s probably because the 24-year-old super middleweight from Cleveland, Ohio, has—preparing for Kalvin Henderson since last summer.

When their original fight fell out on Showtime’s ShoBox: The New Generation back in October after Henderson came down with an illness, Steen remained in training camp.

The super middleweight clash holds a special significance, since it marks the 20th anniversary show of the long-running Showtime series.

“Two undefeated guys coming in on the main event,” Henderson said. “I know he has a good amateur pedigree and he throws good combinations. He is bringing it and I am bringing it. The third time’s a charm to finally make this fight happen. This is the next step in my career.”

As for Steen, being part of that celebration is important, though nowhere near as relevant as getting back into the ring again.

“I think I was around 14, 15 when I first became of ShoBox, but it’s been eight months since I last fought,” said Steen, the older brother of former U.S. Olympian Charles Conwell. “I’ve been at camp back, to back, to back, since my fight against Henderson was cancelled (last October). This is the second time I was supposed to fight (Henderson).

“I’ve seen some film of him and been going with what my team has been telling me to do. In the time I’ve been off, I’ve wanted to improve my movement, my two-step, which is part of my movement, and my defense overall.”

Steen is on a two-fight knockout streak, coming off a fifth-round stoppage last November over Juan De Angel, who had lost three of his previous four fights before facing Steen.

“I was supposed to fight him before, so this fight has been brewing for a while,” Steen said. “I’ve learned since I last fought. I was rushing to get the knockout against (De Angel). I think I’ve learned patience. Henderson is a straight-forward power puncher.

“I think I have movement over him and my pressure. This is going to be really historical. I’m looking forward to it.”

Having a younger brother who is as good as Conwell has certainly been a help. They two constantly push each other. They’re both trained by Roshawn and Otha Jones.

“Charles and I always spar against each other and it makes us better,” said Steen, whose accomplished amateur career garnered an 85-15 record. “Right now, he’s ahead of me, so I have to work harder to get ahead of him. We’re always competitive, and being different, that sharpens us even more seeing a different style.

“I would like to get in the ring at least two more times, maybe three times if I can get it.”