Twins Rene and Felix Alvarado will fight Aug. 14 on Golden Boy card, but NOT against each other 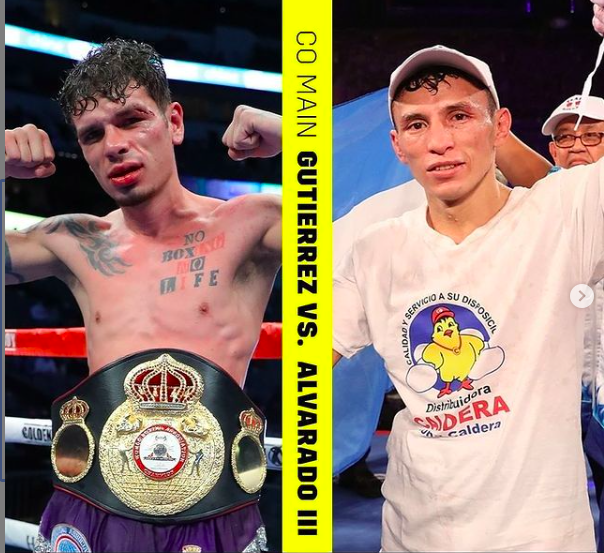 Roger Gutierrez and Rene Alvarado will square off in a 12-round junior lightweight bout and Felix Alvarado will defend his IBF junior flyweight title against Erick Lopez at Ford Center at The Star in Frisco, Texas.

All three fights will stream live on DAZN.

“The final chapter of the longstanding rivalry between Roger Gutierrez and Rene Alvarado will end on Aug. 14,” said Oscar De La Hoya, chairman and CEO of Golden Boy. “The results of their first two fights were sharply different from each other, though both battles produced an equal amount of excitement. This third fight will put an end to their rivalry with even more action.”

Gutierrez-Alvarado will be the rubber match between two boxer-punchers who have displayed power in their previous two fights. In their first clash in July 2017, Alvarado battered Gutierrez, hurting him several times. Gutierrez did not answer the bell for round 7.

Gutierrez (25-3-1, 20 knockouts), who resides in Maracaibo, Venezuela, had lost back-to-back fights to Hector Tanajara and Oscar Duarte in 2018. But he’d rebound to win his next five bouts, leading up to the rematch against Alvarado, including a knockout win over Eduardo Hernandez in July 2019. He is currently ranked No. 9 by The Ring.

The 26-year-old is looking to face the best at 130 pounds, but is not overlooking Alvarado.

“I am very excited for this trilogy fight that I am going to have with Rene Alvarado,” said Gutierrez, who made his pro debut in October 2013. “I know that the fight will not be easy and my opponent is tough. He beat me in the first fight, and then I took the (WBA ‘Regular’) title from him in the second bout. It will be an exciting battle, and I know the fans will enjoy it very much.”

Alvarado (32-9, 21 KOs), who resides in Managua, Nicaragua, had won his previous eight bouts before the loss to Gutierrez, including victories over Denis Shafikov, Carlos Morales, and, most recently, Andrew Cancio.

The 32-year-old, who is the twin brother of fighter Felix Alvarado, is confident he can defeat Gutierrez and secure bragging rights.

“I am happy to have the opportunity to rectify the loss I suffered against Roger Gutierrez,” said Alvarado, who has also faced Yuriorkis Gamboa, Joseph ‘Jo Jo’ Diaz, and Manuel ‘Timo’ Avila. “I made mistakes in that second fight, but I promise to correct them all on August 14 so I can deliver to Nicaragua a great victory. As always, I will train 100% and leave everything in the ring.”

Felix Alvarado will be making the third defense of the IBF title he won in October 2018, stopping Randy Petalcorin in round 7. Rene and Felix also appeared on the same card on Jan. 2, 2021, underneath Ryan Garcia-Luke Campbell, with Felix stopping then 16-1-1 DeeJay Kriel of South Africa in round 10.

Alvarado has won his last 18 bouts since suffering back-to-back decision losses to Kazuto Ioka in 2013 and Juan Carlos Reveco in 2014, in a five month span.

Lopez (16-5-1, 10 KOs), who resides in Guadalajara, Mexico, last fought on February 26, defeating Hugo Hernandez Aguilar by unanimous decision. The 27-year-old has only lost once in his last 14 bouts after splitting his first eight fights as a pro.

In the opening bout of the DAZN telecast, Pablo Cesar Cano of Tlalnepantla, Mexico will square off against unbeaten Danielito Zorrilla (15-0, 11 KOs).

Cano will be a significant step-up in opposition for Zorrilla, who resides in Toa Baja, Puerto Rico and defeated Ruslan Madiyev by split-decision in his last bout on March 4.