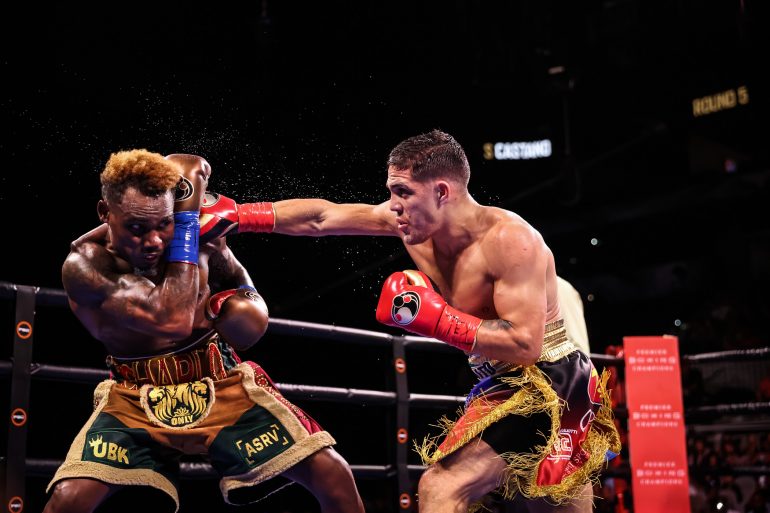 Charlo, The Ring Magazine/ IBF/ WBA and WBC titleholder, has home advantage against WBO counterpart Castaño, who is largely unknown in the U.S. A large portion of fans and media feel that the rampaging Argentinian may need a knockout if he is to prevail at the AT&T Center in San Antonio.

Fight: This was a classic boxer versus brawler duel. Charlo brought the jab, the counter punching game, the lateral movement and the handspeed, whereas smart pressure-fighter Castaño sought to close the gap, cut his man off and unleash physical hell when Charlo ran out of time and distance. 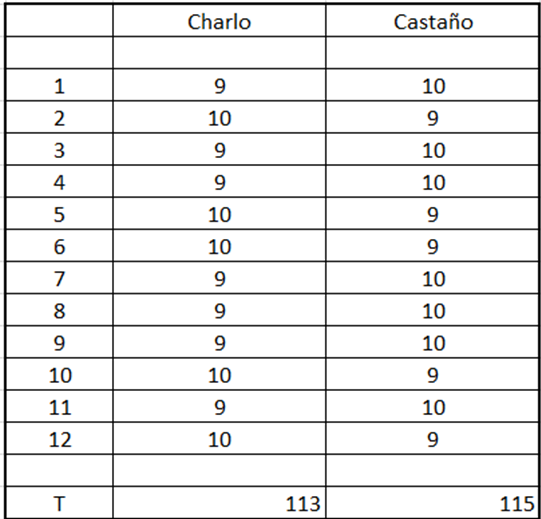 I gave the fight to Castaño by a score of 115-113 (seven rounds to five). I had it even after six, but I thought Castaño turned the screw in the seventh, eight and ninth. Charlo looked like he was feeling sorry for himself during those sessions, but he displayed the heart of a champion to shake Castaño with a game-changing left hand in the 10th. I gave Charlo two of the last three sessions, but, in my opinion, he’d fallen just short. With that said, I have no problem with the official verdict. 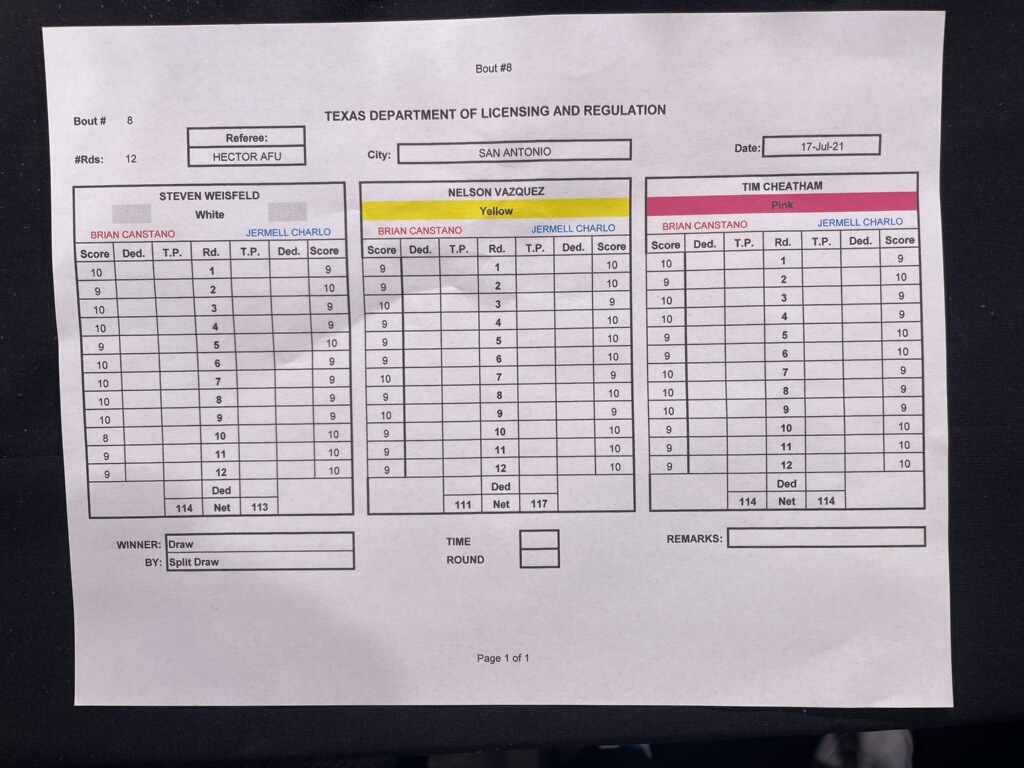 Offending Scorecard: Another 117-111 (nine rounds to three) card!?!?! What is it with those damn numbers? From my viewpoint, Nelson Vazquez’s score is impossible to justify. Weisfield and Showtime’s Steve Farhood awarded Castaño four of the first six rounds. Myself and Cheatham had the fighters even at the midway point. However, Vazquez managed to give five of the first six rounds to Charlo and that is just miles away from reality. In reference to Vazquez’s card, former two-weight world champion Andre Ward stated via his official Twitter account: “That wasn’t a mistake, that’s incompetence!” I agree, and if Carlos Sucre had to answer for his Estrada-Gonzalez 2 scorecard (also a ludicrous 117-111 tally), then Vazquez should be called upon to explain this one.

When I looked under Vazquez’s fingernails, the only other classic I came across was his scoring for Lamont Peterson’s 12-round split decision win over Amir Khan in 2011. In a close fight, two judges awarded that bout to Peterson by scores of 113-112. Khan scored a first-round knockdown, but he had two points deducted for pushing and was bullied and outhustled in several rounds. Out on his lonesome, Vazquez found a way to give the fight to Khan by a score of 115-110 (or, you guessed it, nine rounds to three). 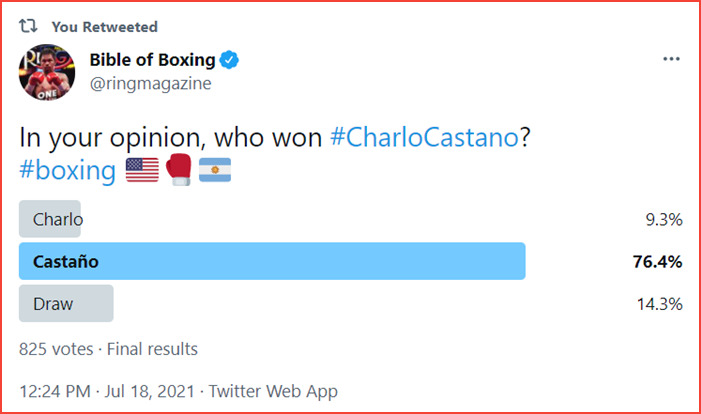 Fan/ Expert opinion: While Charlo has his rooters, social media opinion certainly seems to favor Castaño by some distance. However, as I said above, if you have a fighter winning by just a round or two, it’s difficult to argue with a tied verdict. The word “robbery” gets thrown around far too easily and that’s a symptom of frustration. Let’s be honest, a large quantity of fans will watch a fight without scoring it, then shout “robbery” from the rooftops. This draw, in my mind, was no robbery, but if one fighter has the right to feel aggrieved it’s Castaño.

Final Analysis: We need a rematch. This was a very entertaining fight, contested at a high level and fans will want it rolled back as soon as possible. What’s the alternative? Charlo and Castaño don’t have too many options without each other. Potential mandatories for Charlo include Erickson Lubin (a first-round knockout victim of Charlo’s), Israil Madrimov and Bakhram Murtazaliev. Tim Tszyu is Castaño’s mandatory, but while he’s a quality operator, Charlo-Castaño 2 is where it’s at. Let’s just make sure Nelson Vazquez is off duty that night.