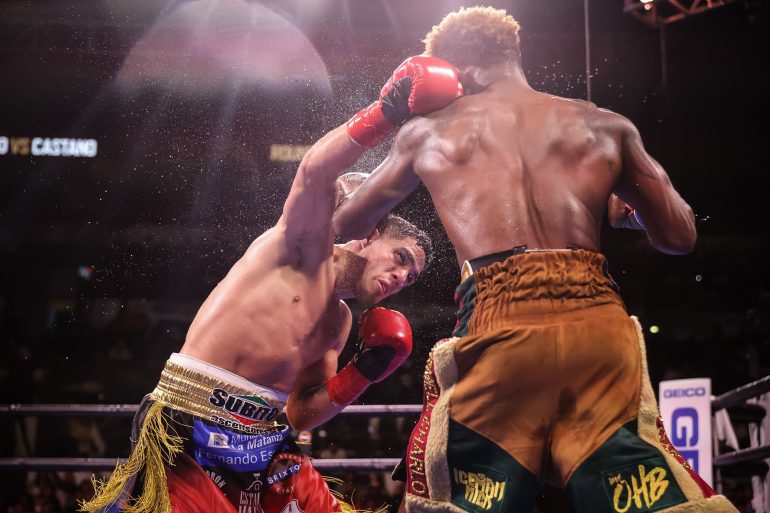 So much for there being an undisputed junior middleweight champion, because there is most definitely a dispute.

Jermell Charlo and Brian Castano did their part, colliding in an effort to unify all four major sanctioning organization belts and waging a highly entertaining battle on Saturday night in a Showtime-televised main event at the AT&T Center in San Antonio.

The judges, however, could not agree and the fight was ruled a split draw with both men retaining the belts.

Judge Steve Weisfeld scored the fight 114-113 for Castano, who seemed to control much of the fight until running into problems in the final few rounds, and Tim Cheatham had it 114-114. But Nelson Vazquez had the outlier score that will be heavily criticized – 117-111 for Charlo, who retained his Ring/WBC/IBF/WBA title while Castano retained the WBO belt.

Charlo won the 10th, 11th and 12th rounds on all three scorecards to secure the draw.

Also at stake was for a winner to emerge as just the sixth male boxer of the four-belt era to be an undisputed world champion. But the draw scrubbed that and left the club as five-man crew of  junior welterweight Josh Taylor, who did it by outpointing Jose Ramirez in May, cruiserweight Oleksandr Usyk (2018), junior welterweight Terrence Crawford (2017) and middleweights Jermain Taylor (2005) and Bernard Hopkins (2004).

When the fight was over Castano and Charlo both were disappointed with the draw and claimed victory.

“I won the fight,” said Castano, who made making the first defense of the title he won by one-sided decision from Patrick Teixeira on Feb. 13. “There were some rounds that he did hit me and he hit me hard. But I won the fight definitely and it was a great fight.”

Said Charlo, who made the second defense of his second title reign, “The win is what I wanted to hear. If anything, I won this fight. I hurt him way more than he did to me. Brian Castano is a tough warrior. He’s gonna give a lot of people problems, but my power is something serious at this weight division.

“He threw a hell of a lot of punches against almost every opponent he ever fought. My skills and my ability and my power — I just knew I could keep him off me and I feel like I won this fight and I deserve to be going home as the undisputed (champion). I am glad to have fought for the undisputed title. It’s different.”

The fight began with the two men trying to figure each other out in a get-to-know-you opening round. The action picked up considerably in the second round with Castano landing several shots that forced Charlo back, but Charlo turned the tables when he landed a hard counter left hook that hurt Castano and put him on the back foot. Charlo followed up by landing several more punches that had Castano in some trouble.

The action never really let up, leaving referee Hector Afu with very little to do in a fight that featured very few clinches and a lot of clean punching.

Charlo (34-1-1, 18 KOs), 31, of Houston, appeared to be in control in the third round until the final seconds when Castano landed a clean left hook on the button that wobbled Charlo. Castano landed a follow-up right uppercut for good measure.

Castano (17-0-2, 12 KOs), 31, of Argentina, whose other draw (also of the split variety) came in a secondary 154-pound title bout with Erislandy Lara in March 2019, bullied Charlo in the fourth round and landed a solid left hook to the jaw and hook to the body. There were some fierce exchanges but Charlo trainer Derrick James was none too pleased after the round, telling Charlo, “You’re giving rounds away!”

Castano bulled his way forward round in and round out. Charlo fired jabs but didn’t make consistent contact with it. Castano, meanwhile, found a way past the jab and forced Charlo to the ropes over and over and landed shots with both hands.

Castano had another good round in the ninth, when he connected with his jab and also with right hands and combinations as Charlo continued to back up under the enormous pressure.

Charlo, however, was not deterred and stormed back over the final three rounds of the fight. He had a very big 10th round. He wobbled Castano twice with right hands and had him in trouble. Castano began to circle and move to stay away as he tried to clear his head but Charlo finally caught him and slammed home a left hook that hurt him again with 30 seconds left. Charlo finished the round by landing another powerful right hand. It was such a one-sided round that Weisfeld scored it 10-8 even though there was no knockdown.

“I was hurt in the 10th round and I had to recoup a little bit. Same with the beginning of the 11th round, but I did enough to win the fight,” Castano said.

Charlo closed the 11th round strong with a big burst at the end when he landed combinations and sent Castano into the ropes. But James was still very concerned in the corner, telling Charlo forcefully, “You have to knock him out!”

Charlo and Castano both tried for one in the 12th round as they spent most of the round brawling, not wanting to leave anything to chance. They finished the fight in an exchange in the center of the ring as the crowd rose to its feet.

“My coach (also) told me I needed the knockout in the ninth round and I just knew he knew what he was talking about,” Charlo said. “I believe in my coach. This is my first time experiencing something like (a draw), so this comes with boxing, baby: Wins, losses and draws.”

With the fight being ruled a draw, both men expressed interest in a rematch, although given mandatory obligations it remains to be seen if all four belts would be at stake if a sequel could be finalized.

“I’m still holding my titles. I can’t wait to get home to my baby and my family, take some time off from boxing and then we’ll get back to the drawing board and see what’s poppin’,” Charlo said. “I want to be undisputed. That’s my goal. That’s my destiny.”

Castano also wants to be undisputed.

“I hope I get the rematch,” Castano said. “He is a great fighter. Me too. I need the rematch.”