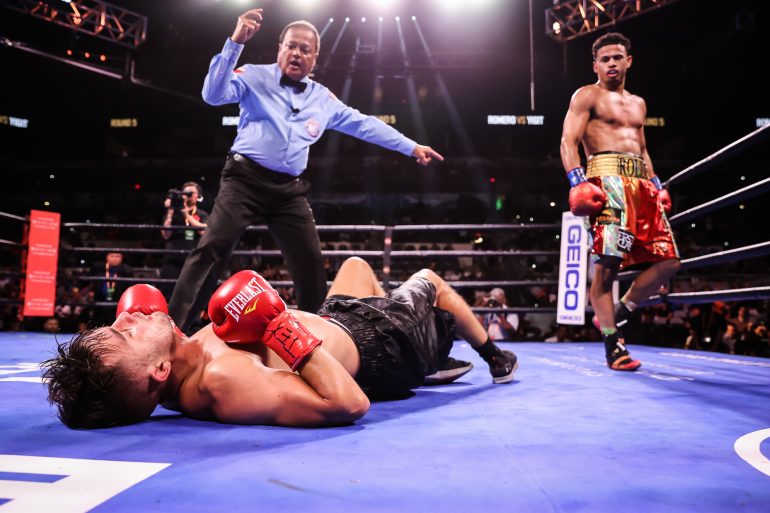 Rolando “Rolly” Romero predicted he would knock out late replacement opponent Anthony Yigit in the first round.

Although Romero did not cash in on his call, he did score three knockdowns en route to a dominating seventh-round knockout on Saturday night in the Showtime-televised co-feature of the Jermell Charlo-Brian Castano undisputed junior middleweight world title fight at the AT&T Center in San Antonio.

Romero was supposed to defend his WBA interim lightweight belt against Yigit and while Romero was right on the 135-pound division limit at Friday’s weigh-in Yigit was a shocking 140.2 – 5.2 pounds overweight. Yigit paid an undisclosed amount of money for the fight to go on and was ineligible to claim the interim belt and Romero could not lose it.

“I fought a tough guy who wasn’t in my weight class,” Romero said. “I fought a 140-pounder and I f—— stopped him. Simple as that.”

It was the second fight in a row that Romero’s foe was over the weight. In January, Jason Pauldo was 138.6 and then a pound heavier at 139.6 on his second attempt and was replaced by standby opponent Avery Sparrow, who was 136 and got stopped by Romero in the seventh round.

But even though Romero (14-0, 12 KOs), 25, of Las Vegas, was at a size disadvantage, he dominated the awkward fight from the outset, twice nailing Yigit in the opening frame. A left hand backed him up in the opening seconds of the fight and a right hand seemed to hurt him with about 50 seconds left.

The fight got messy in the second round, which forced referee Rafael Ramos to pause the bout and implore both fighters to box cleanly following stretches of wrestling and holding.

“Man, I’ll tell you, European fighters are always awkward for everybody,” Romero said. “They got completely different style over than over here.”

In the third round, Romero caught Swedish southpaw Yigit (24-2-1, 8 KOs), 29, with an errant elbow that opened a cut under Yigit’s left eye.

In the fifth round, Romero received another lecture from Ramos after he flung Yigit to the mat in an increasingly messy fight and then Ramos took a point when Romero hit Yigit on the break. Just as the bell rang to end the round Romero dropped Yigit hard with a right hand. Yigit beat the count and got the rest period to recover.

Yigit made it through the sixth round but not the seventh, when Romero knocked him down twice for the knockout. He caught Yigit with a clean counter right hand to drop him hard for the first knockdown of the round.

“At that point I knew it was over,” Romero said. “I swear, I thought it was over (at the end of the fifth round). But after I dropped him that first time I knew it was going to be over soon. It was a beautiful right hand. It was a nice short one, a six-inch one, like a Bruce Lee shot.”

Moments later, Romero landed left hook during a flurry to knock Yigit down again, which caused Ramos to wave off the fight at 1 minute, 54 seconds.

“I knew he was going to come in strong and kind of force it,” Yigit said. “So, I tried to pace myself at the beginning to see where I had him. He was very aggressive and he knew how to utilize all his strengths. Fair play to him.”

Next, Romero wants to fight Gervonta Davis, who holds a secondary junior welterweight belt as well as a secondary lightweight title.

Romero, who is part of the Mayweather Promotions stable, was originally scheduled to fight Austin Dulay (14-2, 10 KOs), 25, of Nashville, but a little over a week ago he dropped out of the fight due to a knee injury suffered in training. Yigit was slated for a lightweight bout on the untelevised undercard and was on standby in case Romero or Dulay could not go.

Yigit, fighting for the first time in 25 months, came into the fight having won three bouts in a row since losing by seventh-round stoppage due to a severely swollen eye left in a vacant junior welterweight title bout against Ivan Baranchyk in the World Boxing Super Series in October 2018.

Vidal got the nod 97-93 on two scorecards with the third judge scoring the fight 95-95 in a fight that took a few rounds to get going with Vidal stalking and Aleem moving.

But then it turned into a firefight in the fourth round. They exchanged shots throughout the toe-to-toe frame with Vidal (13-0, 11 KOs), 25, a Uruguay native fighting out of Coachella, California, ripping body shots and right hands to head and Aleem also landing hard shots upstairs.

In the sixth round Aleem got off to an excellent start. He backed Vidal into the ropes and landed several good punches, but Vidal turned it around when he visibly hurt Aleem with a powerful left hook to the body with about 30 seconds left. Vidal then nailed him with additional head and body shots as the round ended.

“That was the job, to work on the body,” said Vidal, who was fighting in the United States for the third time.

The eighth round was another action-packed frame with each landing clean shots, although it was Aleem who rocked Vital twice with left hooks, once early in the round and again in the waning seconds.

They continued to blast away in the all-action ninth round and 10th rounds to finish off what was a tremendously exciting and competitive fight.

“He was definitely a hard rival,” Vidal said through an interpreter. “All hats go off to Aleem. The first couple of rounds I would say it was pretty even until I fund my distance in the last couple of rounds, and that’s where I think I took the fight.

“I believe I was a fair winner, but I am not here to argue about the score. I may have lost my way in a couple of rounds, but I regained control of the fight.

“Like I told you before the press conference, it’s about going step by step. We took a major one tonight, and now my promoter (Sampson Lewkowicz) will let me know what’s next. I’ll be ready. We are nice and comfortable at 160 pounds. Uruguay can rest easy knowing Amilcar Vidal is here to stay.”

It was a tough loss for Aleem (18-3-2, 11 KO), 27, of Richmond, Virginia, who was competitive throughout and could make the case for a victory in his first fight with trainer Ronnie Shields. Nonetheless, he dropped 1-3-1 in his last five bouts as he attempted to rebound from a majority 10-round decision loss to Ron Ellis in December 2019.