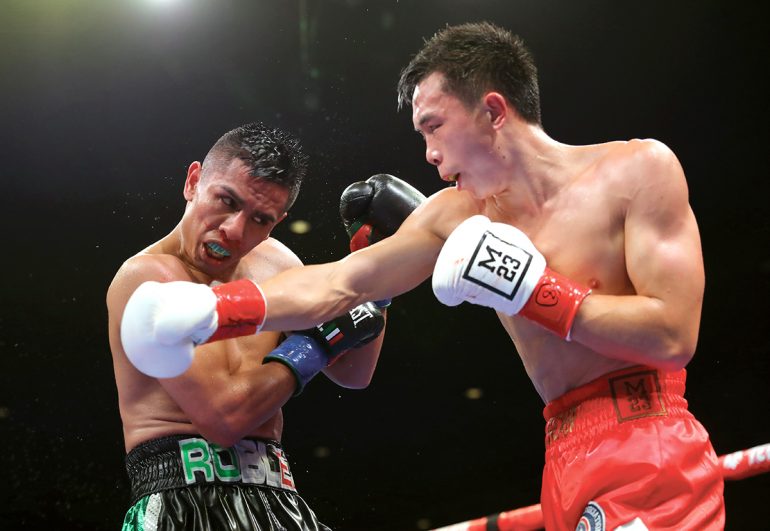 Xu Can on the attack vs. Manny Robles during their 12-round war on November 23, 2019 in Indio, California. Photo By Tom Hogan/Golden Boy/ Getty Images
16
Jul
by Ring TV

Xu Can will take on Leigh Wood at the Matchroom Fight Camp in Brentwood, Essex on July 31, live worldwide on DAZN.

Can, who is rated No. 3 by The Ring at featherweight, is coming off a dominant decision victory over the previously unbeaten Manny Robles III in November 2019. The Chinese star was later linked to a bout against then-IBF titleholder Josh Warrington, but the deal fell through.

“I have been idled nearly 20 months without a fight,” said Can (18-2, 3 knockouts). “In the past 5 months in Miami, my coach Pedro Diaz has worked me very hard. This is by far the best preparation for my title fights. I feel that I am in an excellent status, physically and mentally. In the next three weeks, my goal is to focus on the training and preparation. Leigh Wood is a tough opponent to face and he also has the privilege to fight at home. I must devote 200 percent of efforts to keep my title. I can’t wait to see how I turn out on July 31.”

Wood, who hails from Nottingham, England, is coming off a ninth-round stoppage of Reece Mould that saw him capture the vacant British championship. He has won 24 of 26 fights, 14 by way of knockout, and his only losses came against Gavin McDonnell and Jazza Dickens.

“Opportunities like this don’t always come around, I won’t need another,” said Wood. “I’m going to be world champion. He’s very good volume puncher; if you let him fight his fight, you’re in for a hard night. I know what I have to do, and I will be exchanging on my terms.”