Brian Castano: Jermell Charlo has never seen anybody with my fighting style 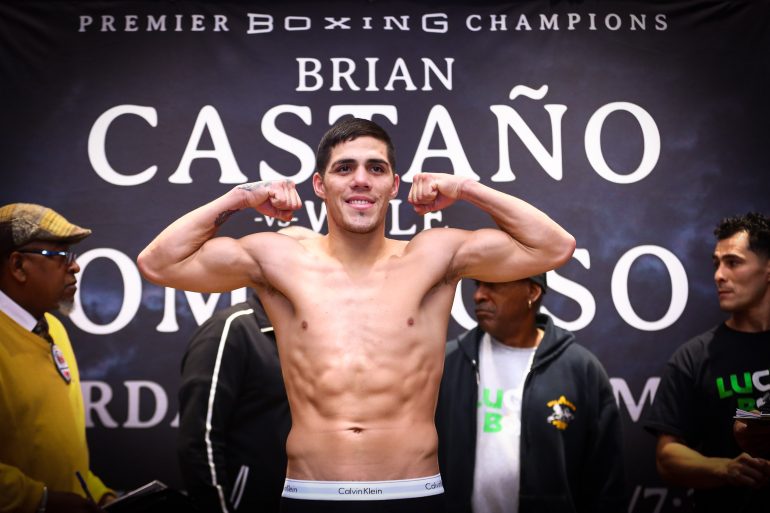 Nearly a decade after Brian Castano turned pro in his home country of Argentina, fought his way up the ranks and claimed a junior middleweight world title, he stands on the precipice of entering the rare air in boxing that he has dreamed about since he was a little boy.

He will square off with Jermell Charlo for the undisputed junior middleweight championship in the main event of a Showtime-televised tripleheader on Saturday (9 p.m. ET) at the AT&T Center in San Antonio that will crown the winner as the first undisputed 154-pound champion of the four-belt era.

There has not been an undisputed junior middleweight champion since Winky Wright, then the IBF titleholder, won a unanimous decision to upset Ring Magazine, WBA and WBA counterpart Shane Mosley in March 2004 at Mandalay Bay in Las Vegas.

“This is one of the most important fights in Argentina’s history, the last 20, 30, 50 years,” Castano said. “It’s for four belts, undisputed at 154 pounds. It’s a great opportunity for my team, my manager (Sebastian Contursi), my family and most importantly, for me.”

Indeed, the 31-year-old Castano (17-0-1, 12 KOs) takes on The Ring, IBF, WBA and WBC champion Charlo (34-1, 18 KOs), 31, of Houston, who is the clear favorite and making the second defense of his second title reign. Charlo knocked out Jeison Rosario in the eighth round of a unification bout last September.

Castano, who fought to a draw with Erislandy Lara in March 2019, has won both of his fights since, including the biggest win of his career so far on Feb .13 in Indio, California.

Charlo, however, is on another level compared to Teixeira, and Castano acknowledged that.

“This will be the hardest fight of my career,” he said. 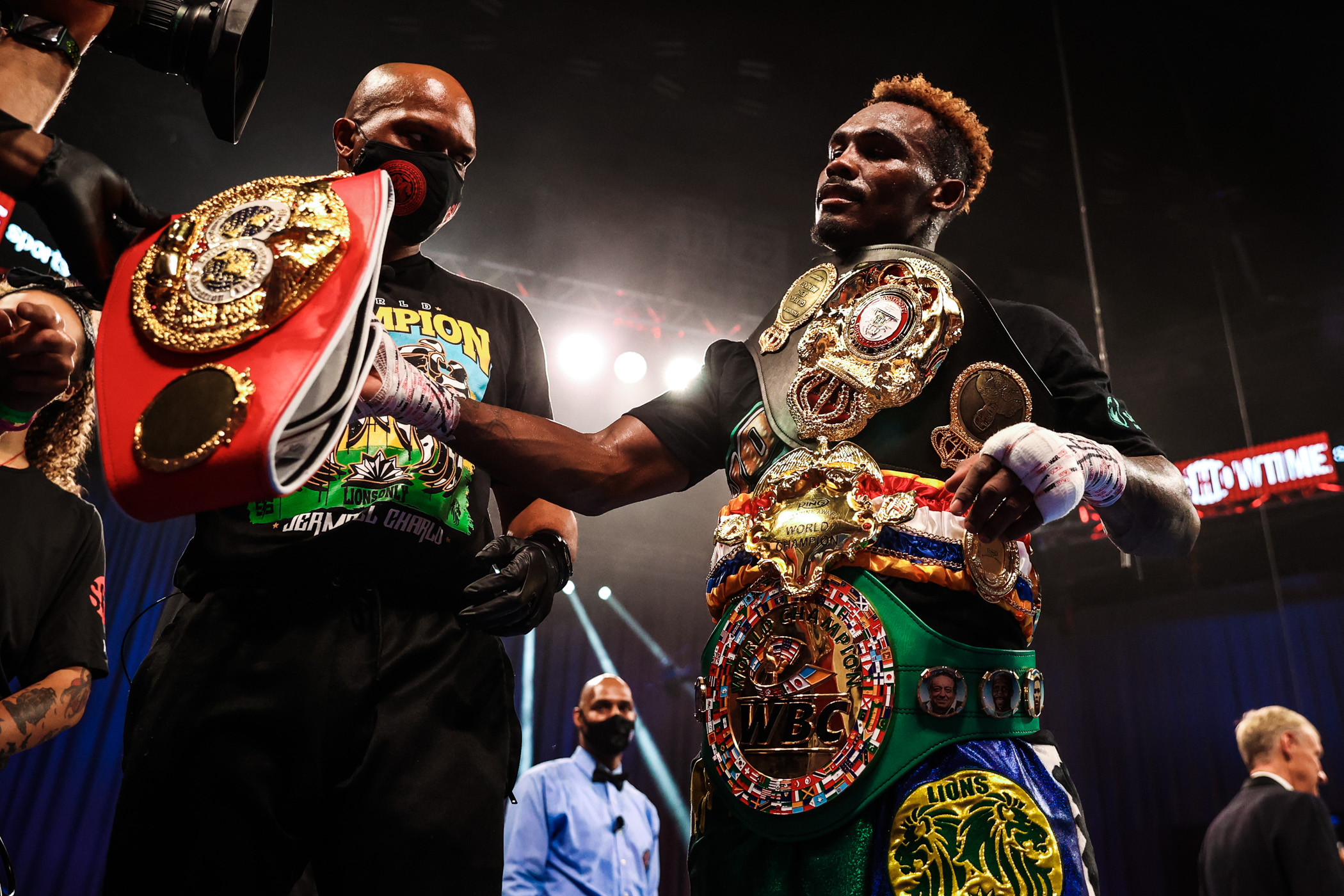 The Target: Jermell Charlo displays all of his 154-pound belts including the coveted Ring Magazine title as trainer Derrick James looks on. Photo by Amanda Wescott / SHOWTIME

But it is the sort of fight Castano has prepared for for many years. He had an extensive amateur career, going 179-5-5, including a 20-11 victory against Errol Spence Jr. in the quarterfinals of the 2011 Pan American Games qualifier in Venezuela, and a unanimous decision win over Sergiy Derevyanchenko in 2013 in the semi-pro World Series of Boxing.

As a young boy, however, he was not that interested in boxing.

He was introduced to the sport by his father, Carlos Castano, who is his trainer. Carlos boxed as an amateur and was 2-2 as a professional welterweight in the early 2000s.

“My interest in boxing was because of my dad, Carlos,” Castano said.

Castano turned pro in 2012 and had the first eight fights of his career in Argentina. But after linking up with Contursi and Premier Boxing Champions, he has fought seven of his past 10 fights in the U.S.

But he has not had an easy road. He traveled to France for a pair of tough fights in 2017 and 2018, defeating Michel Soro and Cedric Vitu (to claim a secondary title), before taking on Lara.

“It’s been a long time coming in the sense that I had to go through a lot to get to where we are now,” Castano said. “But all credit goes to my team, Sebastian Contursi. Once I met him, he opened up a lot of doors for me when I came to the U.S. My mindset has always been to come to the United States, to fight abroad, and fortunately I had the opportunity to do so. And now it’s the pinnacle of our effort, the unification fight.”

His father/trainer Carlos, 57, has been by his side throughout the journey as has younger brother and professional junior middleweight Alan Castano (13-1, 8 KOs). Carlos is as pumped up as his son is for Saturday’s showdown.

“We’re going to give it our all and, God willing, unite the titles,” he said on Showtime’s “All Access” show. “It’s going to be a major war. I hope (Charlo is) ready for the battle that’s coming. It won’t be easy for Charlo. We’ve worked hard and my son has balls. He can take it. It’s in his blood. He can take punishment. He’s not a coward. He moves forward and he’s strong. Let’s see what happens.” 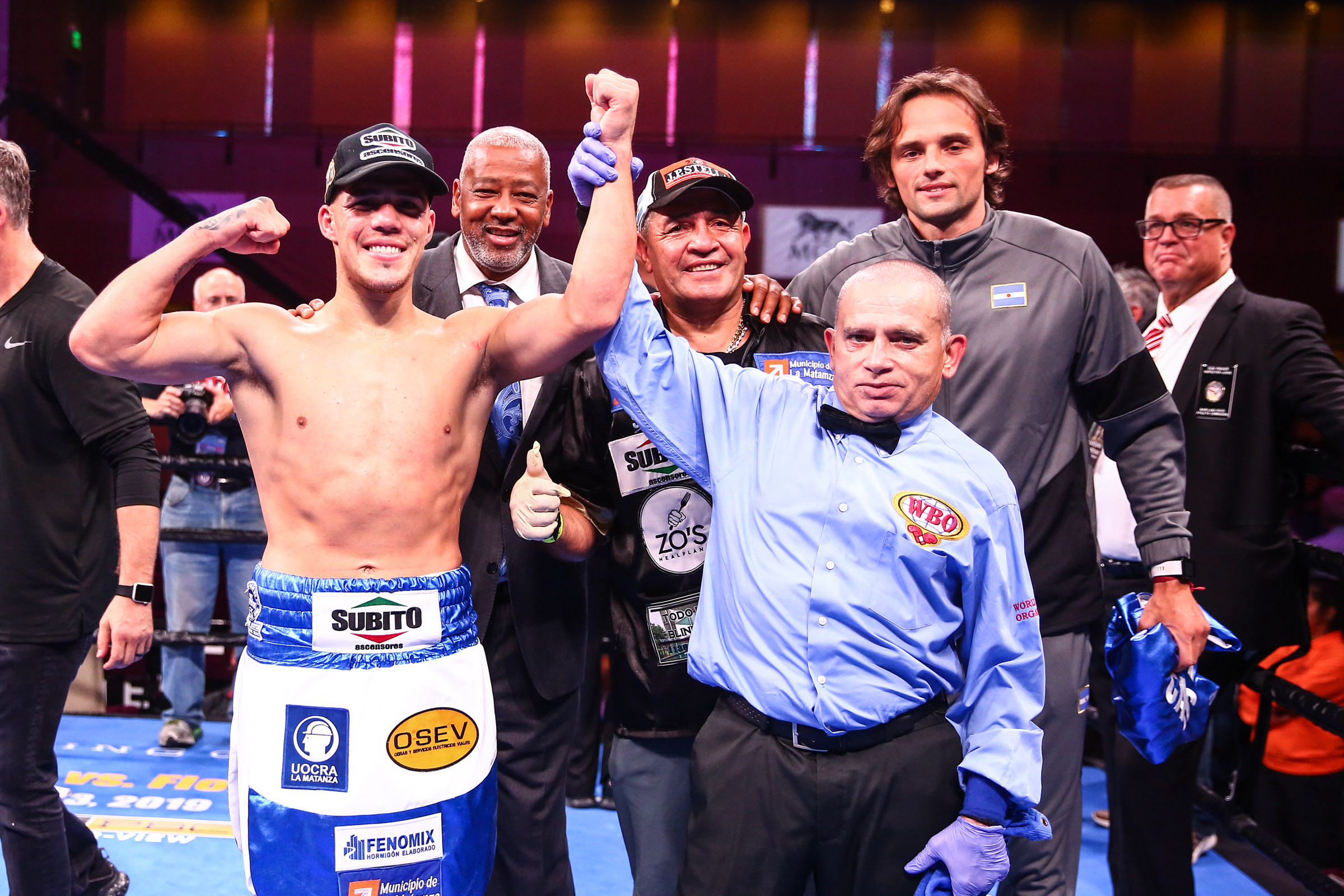 Brian Castano, of course, believes he knows what will happen – that he will have his hand raised in what would be one of the biggest wins in Argentinean boxing history.

“Unifying titles is the ultimate challenge, but my focus is to represent the light blue and white of the Argentinean flag,” Castano said proudly.

He knows the rich boxing history of his country and the magnitude of a win against Charlo.

“Argentina has a very strong legacy of fighters that left their mark in the sport like Sergio ‘Maravilla’ Martinez and Carlos Monzon,” Castano said. “There is (Jorge) Castro and (Juan Martin) Coggi also and I’m proud to be part of that legacy. Winning is really important to me because no Latin fighter has ever unified (four) belts like I am going to do and it will be a very strong sense of pride for me to keep adding to the Argentinean boxing legacy.

That is why Castano said he took the fight with Charlo instead of seeking a soft fight like so many titleholders do in their first defense.

“Why did I choose this fight? To prove why I am the world champion,” Castano said. “I could have taken lesser fights to defend my belt but I wasn’t interested in that because if I am here in the U.S., away from my country for four, five, six months and have to pay for the sparring, pay for the gym, pay for the car, pay for the rent, I better make it worth my while, right?

He has spent three months training in Los Angeles, taking the fight so seriously that he married his longtime girlfriend, Carolina, in April and instead of going on a honeymoon he flew to Los Angeles to open camp three days later. Contursi said there is good reason for Castano to be that serious about the fight.

“We all know that Jermell Charlo is a great fighter,” Contursi said. “We see him as not only a puncher, but a smart guy. He’s very intelligent the way he counterpunches and the way he attacks whenever he sees an opening. I would say he’s a complete fighter – he does almost everything well.”

Castano has also shown Charlo ample respect, but he is extremely confident.

“Charlo is a great fighter, there’s no doubt about it,” Castano said. “But I came here to do my job and I’m going to come forward. I’m the type of fighter that is always going after you. I’m always there to pressure you. Even though Charlo said that I don’t have anything he hasn’t seen before, he has never seen anybody with my fighting style.

“So, I am going to try to do my best. This is the fight I’ve been waiting for my whole life. I have come a long way and I have had to do so much to get here. Charlo is the opponent to beat but I am here to do my job. That’s the bottom line. I can guarantee that I will bare my soul, I will leave my heart in the ring and do everything in my power to become the undisputed champion of the world.”