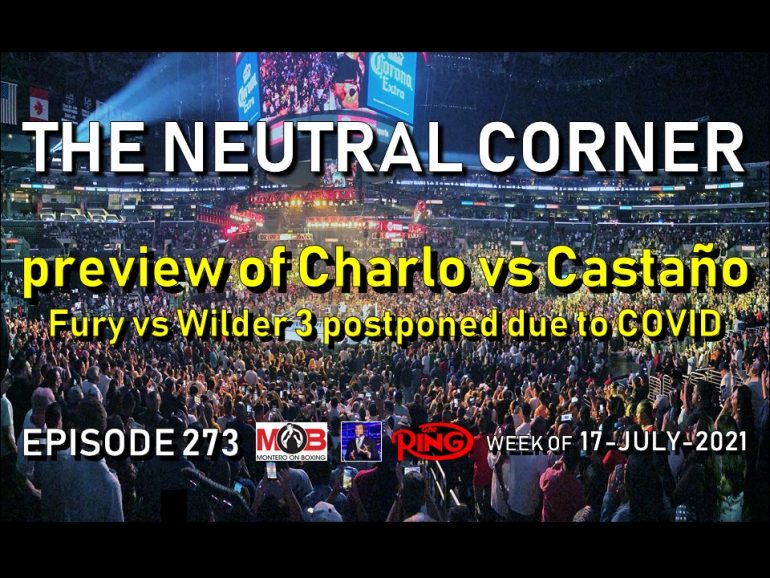 On episode 273 of The Neutral Corner boxing podcast, host Michael Montero gave his thoughts on the biggest news item of the week.

Last Thursday, news broke that Tyson Fury had tested positive for the COVID virus, putting his third fight with Deontay Wilder on hold. Fury dominated Wilder in their rematch last February, dropping him twice before scoring a TKO7 win. However, neither man has fought since. And the soap opera surrounding their contractually-mandated third bout has put the entire heavyweight division on hold. This latest postponement has many fans frustrated.

Originally scheduled for July 24, the Fury-Wilder3 bout will now likely take place in the fourth quarter of the year, possibly on October 9.

On Wednesday July 7, Tim Tszyu scored a TKO3 win over Steve Spark in his native Australia. Tszyu is currently rated No.1 at 154-pounds by the WBO. He should be in line to face the Charlo vs Castaño winner in the near future. 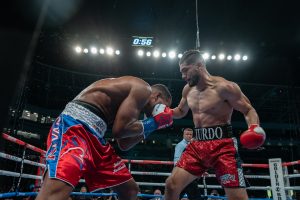 “I like the possibility of a Bivol vs Ramirez fight,” said Danny. “I really want to see Bivol back in the ring. Hopefully that fight gets done because I’d love to see it.”

“Oleksandr Usyk is going to beat Anthony Joshua (in their September 25 fight)”, said Jack. “Usyk definitely has the power to hurt AJ. He hurt Dereck Chisora in the seventh round of their fight last year.”

“At the end of the day, I don’t care how much money the fighters are making,” said Andrew. “I care if they’re entertaining for me to watch. I tend to enjoy Top Rank’s cards because of the matchmaking on their undercards. Even if it’s not two top-tier fighters, they put on entertaining fights.”

“I’m telling you right now, Usyk is going to outbox AJ,” said Thad. “But he’s going to get Golovkin’ed and Kovalev’ed on the scorecards (against Canelo and Andre Ward in Las Vegas). The hometown judges in England will never score against Anthony Joshua for an outside fighter.”

“Josh Taylor should be ranked above Terence Crawford on The Ring’s pound for pound list,” said Chris. “Crawford is mainly ranked because of what he did at 140-pounds. Taylor did the same thing Crawford did, but his complete unification at 140 was a hell of a lot more impressive.”

“I want to know what’s going to happen with the landscape at 154-pounds after the Charlo-Castaño fight,” said Hannibal. “Errol Spence and Danny Garcia have talked about moving up (from welterweight), but could a Charlo vs. Spence fight even happen? They both train at the same gym! Who would Derrick James coach in that fight?”

“I think there should be consistency with The Ring’s ratings,” said Kento from Barbados. “I’ve seen a lot of talk on Twitter about the justification of a No. 1 vs. No. 3 fight for the Ring championship. I think the Ring belt should be on the line only when it’s a No. 1 vs. No. 2 matchup, no ifs ands or buts.”