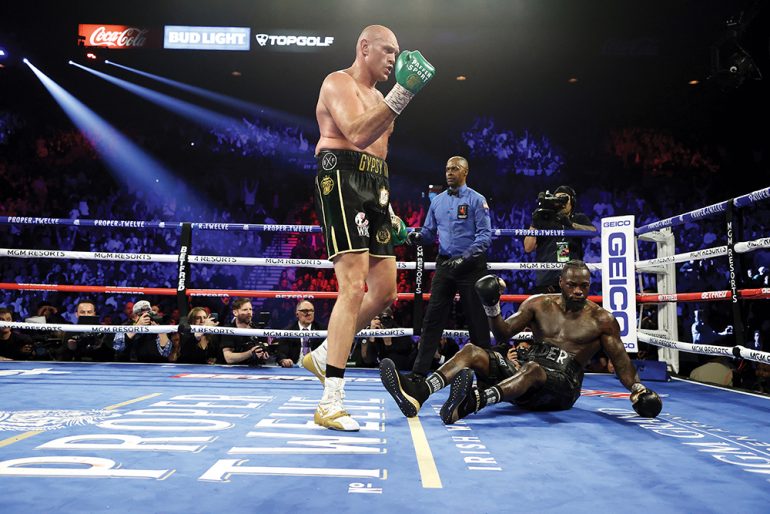 Heavyweight king Tyson Fury beat out three other fighters who had pretty good years as well to win one of the highest honors in mainstream sports.

The Ring Magazine’s heavyweight champion beat out Teofimo Lopez, Claressa Shields and Canelo Alvarez to win the Best Boxer award at the 2021 ESPY Awards, which were held Saturday night at The Rooftop at Pier 17 in New York City.

The ESPYs, which are televised live on ABC in the United States, recognize the top athletes across different sports in a fashion similar to the Academy Awards and Emmy Awards.

Fury (30-0-1, 21 knockouts) of Manchester, England had an outstanding year in 2020, despite the pandemic wreaking havoc on the sports world. His seventh round stoppage of Deontay Wilder sent a message to the heavyweight division, giving him a major sanctioning title for the first time since he defeated Wladimir Klitschko in 2015.

The win is a testament to the growing popularity of Fury, as the winners are selected through online fan voting. Fury did not address the award on Twitter, but did retweet a congratulatory post from his promoter, Top Rank.

The Gypsy King added some more gold to his collection 🏆 @Tyson_Fury was voted 2021’s Best Boxer at the ESPYS. pic.twitter.com/7mzvds91Ov

The award is the lone good news this week in the career of Fury, whose third fight with Wilder on July 24 is expected to be postponed due to a COVID-19 outbreak in his entourage.

Few would have argued if one of the other nominees had won the award.

Alvarez, won won the award in 2019, has been the sport’s most active top fighter since the pandemic, unifying three 168-pound titles since December, while Lopez ended the lightweight championship reign of Vasiliy Lomachenko with an upset victory.

Shields is coming off winning the undisputed championship in a second division after defeating Marie Eve Dicaire in March.

Fury’s win is the eighth time a current heavyweight has won the award, which was given out annually from 1993 to 2006, before being replaced by the Best Fighter award from 2007 to 2018, which included both boxers and mixed martial arts fighters.

Awards for the two sports were separated in 2019. There was no award given out in 2020 due to the COVID-19 pandemic.