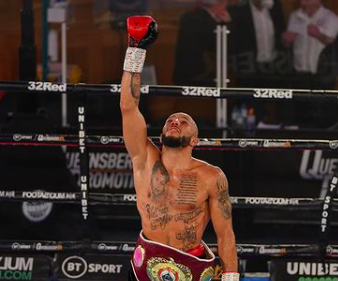 It took Lyndon Arthur nine rounds and two knockdowns to dispatch previously-undefeated Italian Davide Faraci in an outing the winner declared was so-so, but kept him in contention for a world title fight.

“That was average,” admitted Arthur afterwards.

Lyndon is rated No. 1 by the WBO at light heavyweight and wants to fight their beltholder Joe Smith next.

It was, at times, a dull affair at Royal Albert Hall, in Kensington, England, with the Swiss-born Faraci game and busy but Arthur looked good in spells. 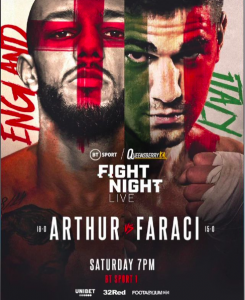 After four rounds, trainer Pat Barrett – in Arthur’s corner – said: “You’re the quality fighter, now show it.” And late in the fifth Faraci was in big trouble. The Italian was tagged by a big right hand and hurt, and moments later another right crashed home and Faraci was really struggling.

Faraci motioned to indicate that he was okay but he was wobbling and in dire straits.

The Italian stayed in the fight through the sixth and it was scrappy in the later rounds as the pesky visitor stayed busy and kept working.

Then, with around a minute remaining in round nine, Arthur walked the Italian into a right hand and Faraci went down for the first time. Moments later, he hit the canvas a second time from a left uppercut-right hook and then, after Arthur landed a bunch of right hands, referee Marcus McDonnell waved it off to spare the visitor further damage.

Faraci is now 15-1, while Arthur improved to 19-0 on the Frank Warren/Queensberry Promotions card.

“I made hard work of it,” said Arthur, who declared he was levels above Faraci and guilty of switching off at times. “It is what it is. If I fight for a world title, I’ve got to be better than that.”

Archie Sharp, in his first fight with new trainer Alan Smith, was cut above both eyes but won a messy 10-round super featherweight contest against Mexican Diego Andrade.

Super middleweight Zachary Parker (below) moved to 21-0 with a rapid-fire body shot win over 41-year-old Uzbek Sherzod Khusanov, who was counted out on his knee with just seconds remaining in the opening round. 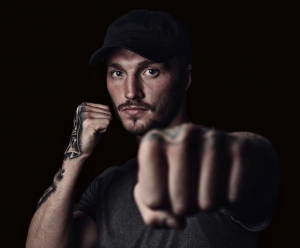 Parker, aged 27, is the WBO’s No. 1 and he wants to fight that organisation’s champion, Canelo Alvarez.

The winner started working the visitor’s body early and a left hook into Khusanov’s torso brought about the end of the fight with just 2:46 elapsed. The Uzbek drops to 22-3-1.

The southpaw McCann came out quickly and broke through in the second round with a left hand and the African soon came undone. McCann, now 10-0, flew in behind both hands and after 2:07 of the session it was called off. Chuwa dropped to 20-5.